10 The Walking Dead Moments That Prove Michonne Is the Fiercest

When Danai Gurira announced she'd be leaving The Walking Dead during Season 10, fans everywhere mourned. It's not just that the katana-wielding warrior is a key member of the survivors, but she is also a strong, uncompromising leader whose steely eyes were just as intimidating as every decapitated walker she left in her wake. Gurira turned Michonne into such a powerful female role model, it's no wonder the actress has now become a literal superhero in the Marvel Cinematic Universe.

For nearly a decade, Michonne has ruled over the world of TWD as the fiercest warrior on the block. Along the way, she’s gone on an epic journey from that mysterious, walker-towing lady you probably don't want to mess with, to the mamma-bear you definitely don't want to mess with. No other character has accumulated more memorable bad-ass moments than Michonne. As fans deal emotionally with her exit in The Walking Dead Episode 13, we've compiled her 10 fiercest moments to remind you that, seriously, don't ever mess with Michonne.

Has anyone entered the TWD Universe in a more auspicious and, frankly, cooler manner than Michonne did? Hooded, dragging two chained walker, in a cloud of mist? No. The answer is no. From that first moment, coming out of nowhere to save Andrea, fans knew they were going to love her. 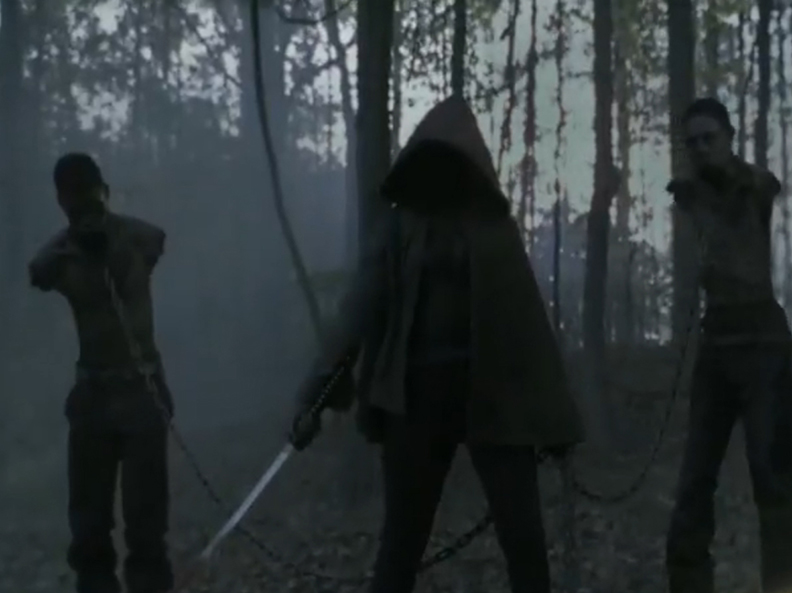 The Governor was Michonne's first foe, and she showed right from the start what's going to happen to those who stand in her way. In this case, she sliced right through Penny, the Governor's walker-daughter, right in front of her very-alive father, tormenting the Governor, just like he tormented Michonne. 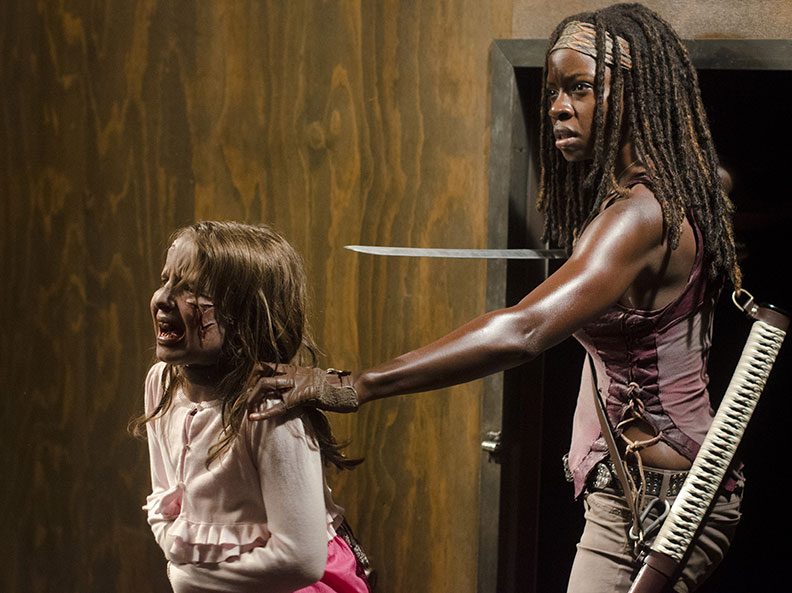 Michonne Puts a Sword Through the Governor

This is what happens when you get between Michonne and Rick (Andrew Lincoln). You get a katana right through your chest. Be warned.

Michonne vs. the Herd

Typically, the survivors develop a battle plan to fight a herd of walkers. There are weapons. Horses. Vehicles. Arrows. Guns. All Michonne needs is her katana to down a truly staggering number of walkers all by herself.

Michonne often proved her prowess by saving Rick. This time, she saved Rick from himself, lest Alexandria turn on him during a speech that made him sound like a bit of a maniac. It's important to note that one swing is all it takes for Michonne to knock Rick Grimes out cold. It's also important to note that he's not even mad. 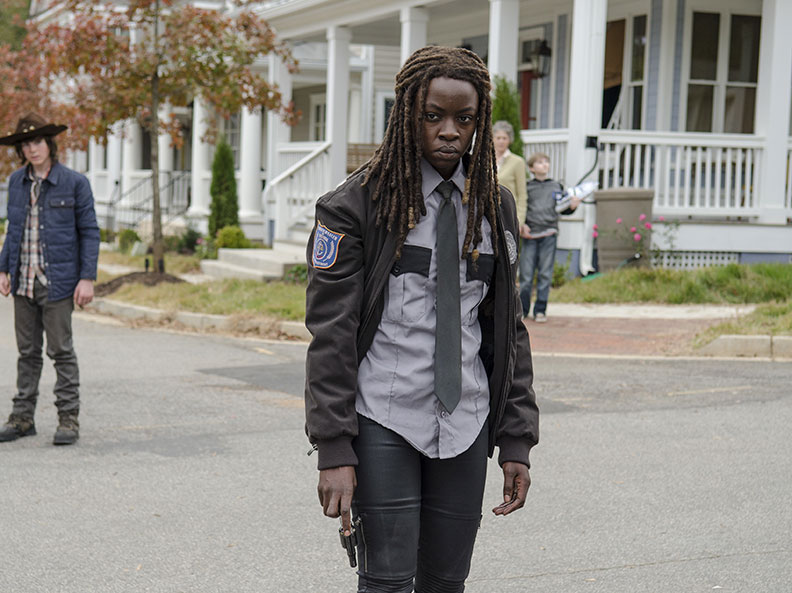 Seriously, don't stand between Michonne and Rick. Or Carl (Chandler Riggs). Ron just lost his whole family, but he should not have pointed that gun at Michonne's. If he was paying attention, he would've known that katana was coming up right through his chest.

The survivors were defeated emotionally and physically after being forced to watch Negan (Jeffrey Dean Morgan) murder their friends. But one woman refused to give in. She refused to surrender her weapon and kept their fighting spirit alive so that, when it was finally time to fight back, they were ready. That woman was obviously Michonne. 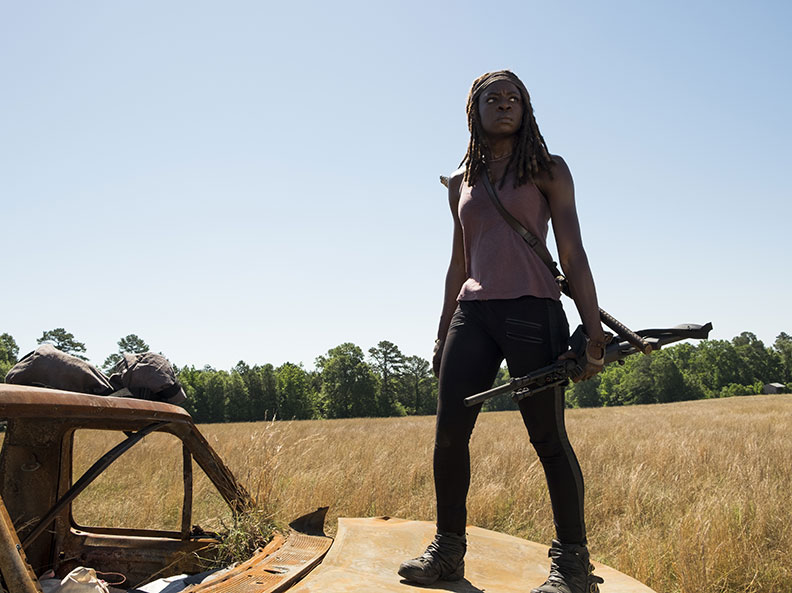 Typically, Michonne has been more of a blunt instrument type of fighter. Give her a katana, and she'll kill every walker in sight. But she'll also use whatever she must to get the job done. In this case, she and Rick destroy a gang of walkers using a tripwire which they tether across two cars. It's appropriately gruesome and awesome. 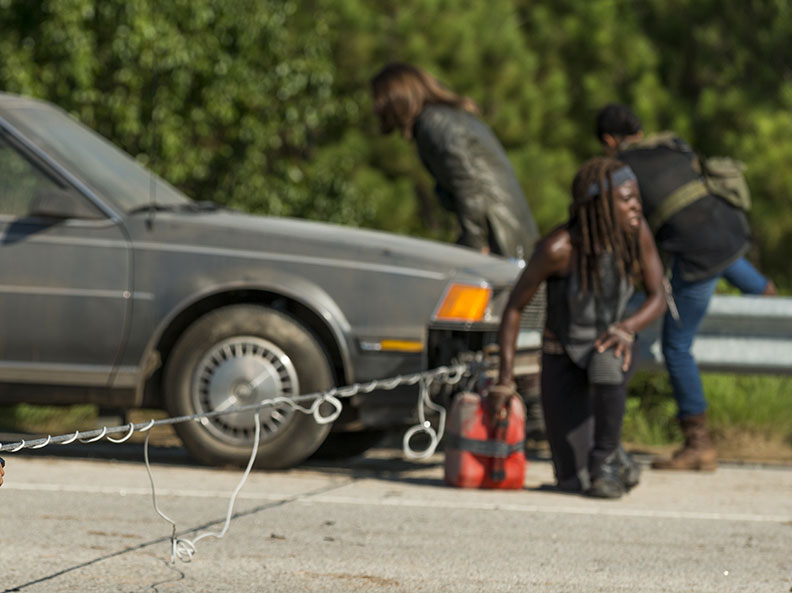 When a former friend and a gang of deranged children get between a very pregnant Michonne and her kids, Michonne does what she has to. It isn't pretty, but it arguably takes the most determination of any of Michonne's many feats of bravery.

After losing Rick, Michonne retreats to the safety of isolation to keep her loved ones safe. But when the going truly gets tough, she rises to the occasion and leads her people through a treacherous ice storm, fighting walkers, rallying the troops and just being generally amazing. That's why she's the fiercest. 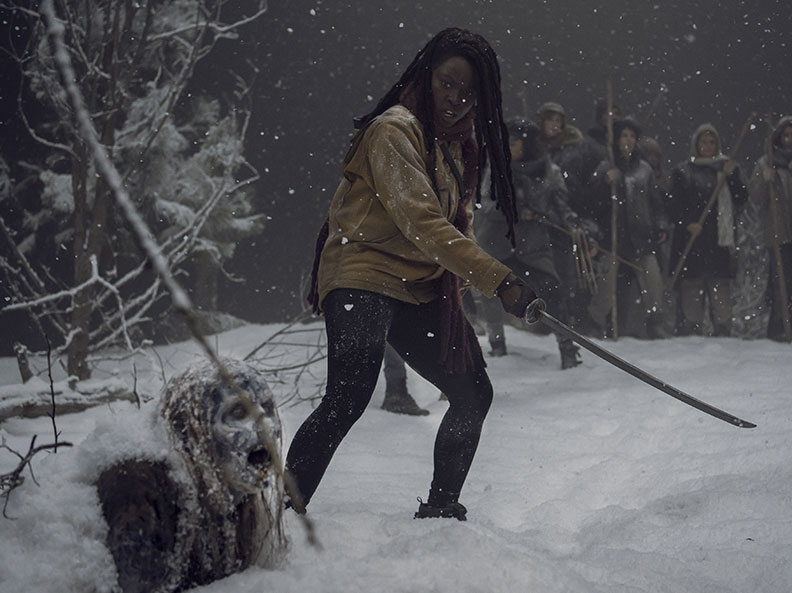 Another TWD legend is returning! Click here to read all the reasons we're excited Maggie (Lauren Cohan) is coming back.

For more on Michonne, trailers from Season 10 and details on how to watch The Walking Dead, sign up for the weekly Walking Dead newsletter.