Ashley Romans, who plays Agent Tabitha Hutter in AMC's NOS4A2, chats with AMC.com about coming back for Season 2, shares how Tabitha struggles with confronting supernatural adversaries, and breaks down THAT fight scene from Episode 4.

Q: What was it like coming back to Season 2 as a series regular?

A: Oh man, it was super exciting! I felt very welcomed by the cast and the showrunner, and it just felt like coming back to a fun family—a family of working people. I would say looking back at it, it went by like a blur. I think just the nature of doing it for the second time, we had our routine going. I think the first season of any show is figuring out how things work, and the second time everything moves a lot better. There's a rhythm to it. And I really love living in Rhode Island, so I think that made it go by even faster.

Q: Where are you from? What is it about Rhode Island that you love?

A: I'm originally from New Jersey, went to school in New York, and as soon as I graduated from university, I moved out here to L.A. I hadn't been back on the East Coast for about four or five years. Rhode Island is just a treasure. It's just so beautiful, especially being there for the late summer and then being there for the fall and experiencing seasons again. It was gorgeous! It went by like a blur to me because it was the time of my life. I really love it too, because it's almost like the environment is another character in the show.

Q: Things have gone pretty well for Tabitha in the intervening years since Season 1. What do you think she's thinking when Vic makes a return to her and Maggie's life?

A: I think Tabitha's really protective of Maggie, because Maggie's not using her powers anymore. She's had those urges, but she's in a really sensitive place, and it feels as though Vic is just coming in and asking for help when she needs it. It's only really a part of Maggie's life when she needs it to be, so it's an affront. Vic is coming back into Maggie's life and using her powers, asking things of her that she doesn't do anymore. So Tabitha feels super protective, but she also realizes that Vic is a good kid -- I mean grown woman now -- but she went through a whole lot, and Tabitha really wants to help. Tabitha's career is based in a system where you do stuff—you take charge and you fix it. She's used to fixing everything, but she's not realizing that she's in love with a woman that could fix it herself, and that she's destined for something greater. I think that's a lesson that Tabitha learns this season, that her muscle isn't going to fix everything because this is really out of her league. 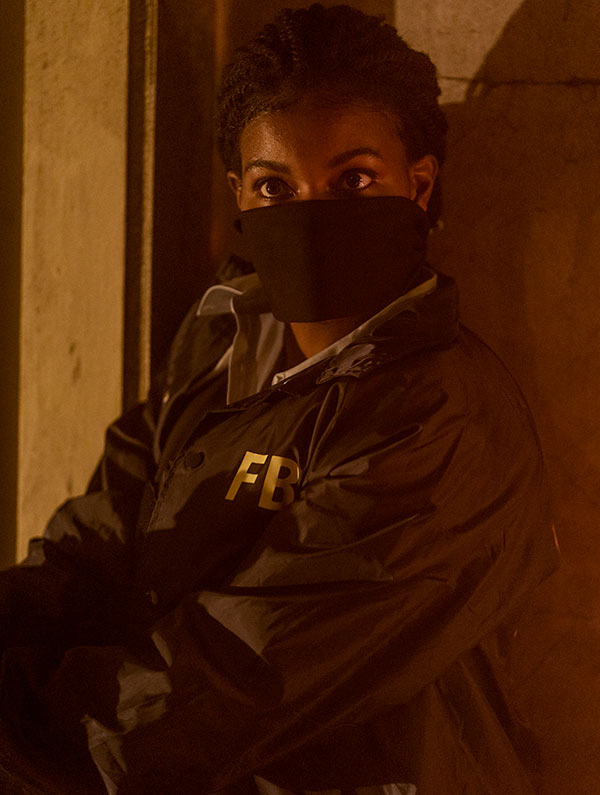 Q: The characters in NOS4A2 have one foot in the supernatural world and one in the physical world, but Tabitha is probably mostly rooted in the real world. What do you think she makes of the supernatural elements of Vic's battle with Charlie Manx popping off again? Did she ever really come to terms with these magical elements?

A: Yeah, that's a great question! I thought about that too, and I think her relationship with Maggie helps her come to terms with that. I love the idea that in this story your trauma or the things that you have gone through, qualify you for something greater—to be a greater influence on the world. Because Tabitha had that experience when she was very young, even though she lives in the physical world, and she's about facts and results, she always had a sneaking underlying suspicion that there was more to life than she was seeing. I think her relationship with Maggie has helped her grow in that area and in accepting that. I think she's grown more and more, especially after Episode 4 of this season. She gets her arm broken, so she physically can't do anything. She's physically useless. She's not used to feeling useless. But it's cool that Tabitha is this liaison between the real world and the world of thought.

Q: The return of Vic also brings the return of Bing Partridge. How do you think Tabitha feels now that "the one that got away" is closer than ever?

A: Yeah, that's very true. He's the one that got away. In terms of Tabitha's clearance rate, she has such a high clearance rate as a detective and now she's graduated to FBI. So she's not used to people outwitting her. Furthermore, Bing is not a very intelligent person, and she knows that, so the fact that he's been able to outwit her, she's like, "What is going on?" So, just as she thinks she has him, she realizes, "Oh, the reason Bing can get away with so much is because he has Charlie Manx at his disposal, on his side, pulling his strings." So she's up against more than she originally thought.

Q: In Episode 4, Tabitha corners Bing at his new House of Sleep, and faces off against both Bing and Charlie Manx. What did you think when you read in the script that Tabitha would be fighting them one on two?

A: I thought I was going to die! I was thinking, "I guess this is where they kill me off!" I always expected them to tell me that at the beginning. And I always had this sneaking suspicion that if Tabitha was ever up against Charlie Manx, if they were ever in a scene together, Tabitha would die. But it didn't happen that way, thank goodness. I think it was a really sobering and unreal moment for Agent Hutter. I think it's important to mention the arrogance she has, that she can go in and not wait for backup and fix the situation and break the rules. It does end badly for her, and she realizes she's up against something way stronger than her. I think that has to be a very sobering moment for her. 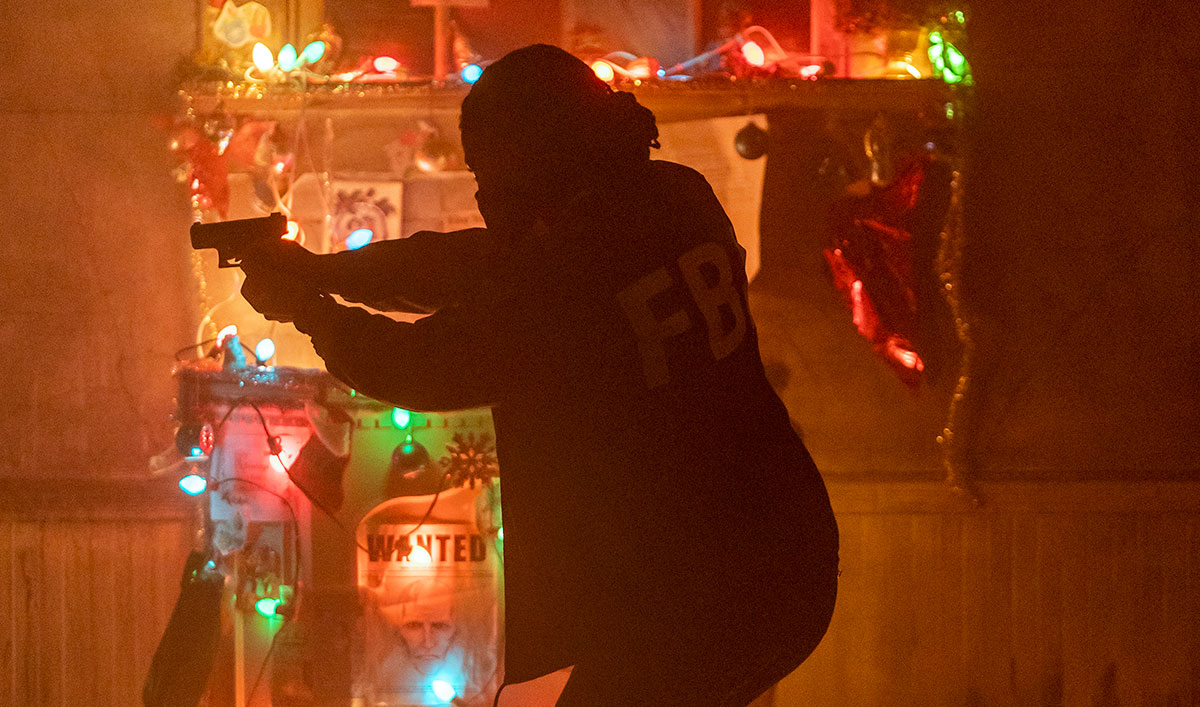 Q: What was it like filming that intense fight scene with Ólafur Darri Ólafsson and Zachary Quinto?

A: Darri and Zach are so great! They're just really supportive and fun, and I never had a chance to work with Zach last season, so it was fun being on set with him this time. Honestly, I never felt safer. It was so interesting when I went in and did ADR for the scene, and I saw the scene for the first time. I was like, "Wow, that looks super intense," but, when you're actually filming it, my stuntwoman was super cool. She did one stunt I couldn't -- falling into the boxes. Darri was super protective, he made eye contact, and I never felt safer, especially throwing myself around. Any type of danger came from me throwing myself. So that was a fun time!

Q: And then of course Tabitha also shoots Manx in the head! What did you think when you first learned that Tabitha gets such a great shot on Manx?

A: I'm a really bad shot! I'm glad they made me look good.

Q: Of course Charlie Manx gets away. Does knowing a man she just shot in the head can just drive away change the game for her?

A: Yeah, I think that totally changes the game. There's a moment I have with Vic later on in the season where I'm like, "I can't help you. The only thing I can do is just make sure they stay away from you while you help yourself." And I think we're all learning that's what allyship looks like: really allowing whoever is hurt to be the main agent in their own betterment. I think Tabitha does a really good job at that, and I think she's also realizing too that the bureaucracy, or the FBI, the system that she works for is failing, and it's not doing a good job of protecting the people who are most vulnerable. She needs to come to terms with that.

Q: For fun: Have you given any thought to what you think your knife and your inscape would be?

A: It'd be something guacamole related. Like my knife is the chip and the guacamole, and I when I bite into them, I would be able to read people's minds.

Click here to see Tabitha's suspenseful showdown with Bing and Charlie Manx in the House of Manx in the latest episode on amc.com and the AMC apps for mobile and devices. Check out the on-air schedule here for more encore viewings and upcoming episodes of NOS4A2 on AMC.

For more Q&As with the NOS4A2 cast and creators, check out this interview with Zachary Quinto, who plays Charlie Manx. Quinto talks jumping right into the action of Season 2, revealing the layers of the villainous vampire’s backstory and more. Jonathan Langdon goes behind-the-scenes on Lou's run-in with Bing here. Ashleigh Cummings shares in her Q&A what it's like getting back into the saddle for Season 2, and why Vic is stuck in a cycle of trauma. Author Joe Hill teases the larger world of Season 2.

Watch a sneak peek of Sunday's all-new episode here, in which Chris and Lou prepare for battle against Charlie Manx at the Lake House.