AMC.com had the chance to catch up with Jonathan Langdon, who plays Lou Carmody on AMC’s NOS4A2, and we got an insider’s perspective on the latest season. Langdon discussed joining Season 2 as a regular, and how fatherhood shaped the way he approached the role. He also gave us the inside scoop on what it was like to film the scene when Lou gets a sinister visit from Bing Patridge (Ólafur Darri Ólafsson) and Charlie Manx (Zachary Quinto).

Q: You came in right at the end of Season 1. What was it like to join in the second season as a regular?

A: It was really exciting, to say the least. The whole cast and crew was very, very welcoming. It was really exciting to be able to really bring the character to life. When I appeared in the last episode of the first season, I was still warming up to the character—still trying to figure stuff out. Even in the first few episodes of this season, you get to see Lou’s story really fleshed out. You come to see how much he loves his family and how much he’ll do for them. I find that to be so cool and I’m really excited about it.

Q: Lou is such an easygoing and relatable guy, in a story filled with supernatural powers. How are you and Lou similar? Different?

A: Well, we both look alike! When we were filming the second season, I had just had my daughter. She was two months old, and I had to fly out to Rhode Island to film. So we’re both dads. I was drawing on that heavily, even though I had very little experience being a dad, but the emotional connection is there immediately. Lou feels that he’s very lucky to be in the situation he’s in. It kind of just happened, and it’s everything he’s ever wanted, so he’ll try to do anything to keep that intact. His family means a lot to him. I find that I draw upon that a lot to play this character. He’s also pretty nerdy, which I am as well, just in a different way. He’s into comic books and he goes to Comic-Con. I love that stuff too, but I’m not as learned in it. I’m more of a video game guy, so I’m able to draw on that and try to swap it out and see if it will work. But there’s one very big thing — I think Lou’s cooler, a lot cooler than me. I’d never ridden a motorcycle until playing this role! 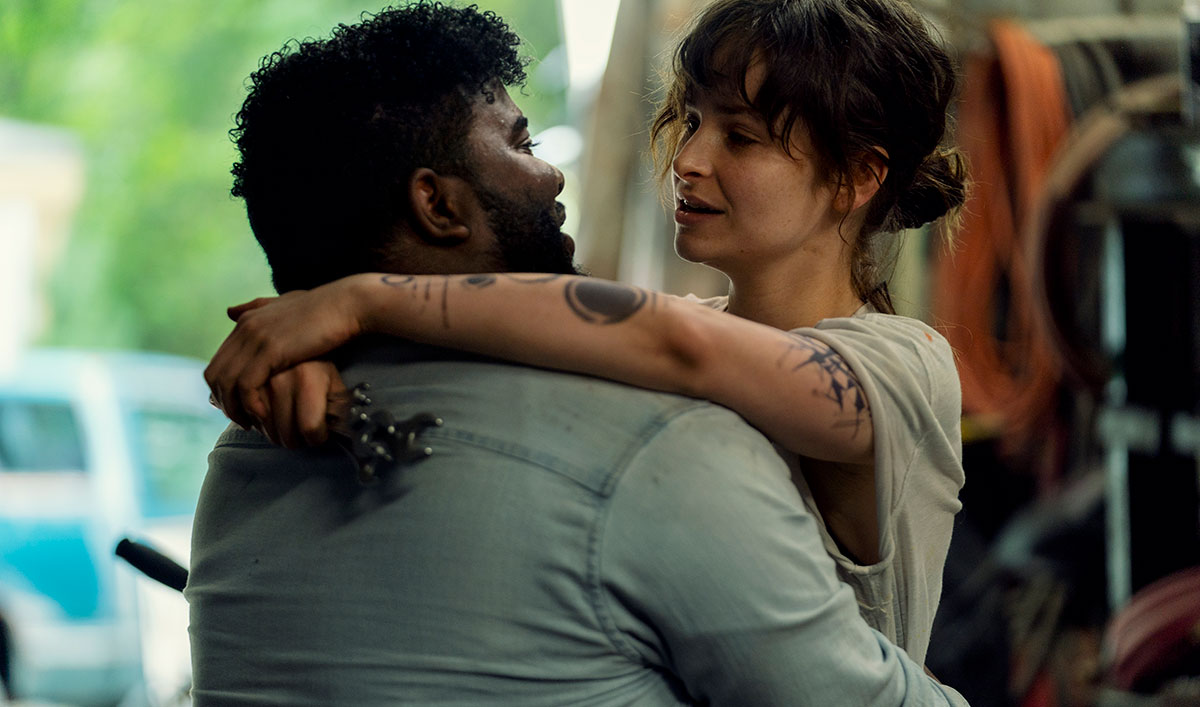 Q: In Season 1, Lou thought Vic (Ashleigh Cummings) was a superhero. Has that changed at all in the last few years, watching Vic decline, and then nearly burn their house down and leave home?

A: Lou is devastated. He still thinks of her as a superhero, but he’s devastated that she puts that before her family. She puts that before Wayne and himself, so that really hurts him a lot. He wants to do this with her. I think he’ll always look up to Vic because she’s such a strong person. She has a big heart. He knows that. And her superpower for him — yes, it lies in the fact that she’s a strong creative and she has a knife. That she can tear the fabric between reality and reality of thought. But her true superpower is how much she cares for them, to the extent that she would do what she is doing for them. I feel like that is where that all comes from, but he’s also worried for her because he doesn’t want anything to happen to her. He wants to be there for her while she’s there for the family. So in different ways he’s trying to be there for the family, while she’s literally trying to protect him from a monster. There’s that incredibly strong connection there—he really does love her a lot.

Q: In Episode 3, Lou gets a sinister visit from Bing Partridge (and Charlie Manx). What do you think he’s thinking when he sees that gas tank in the car and realizes he’s talking to Bing?

A: Lou’s never met Bing before up until that moment. Lou climbs in the truck, sees the gas mask and the canisters in the back seat, and he puts it together. “Oh, this is the guy.” Lou immediately switches from, “I was just doing my job, this guy’s a little strange” to “I know who this guy is, he’s trying to take my son,” so he goes into papa bear mode and does what he needs to do to protect his family as much as he possibly can. He’s not a fan of Bing at all, to say the least.

Q: What did you think when you read in the script that Lou and Wayne would be getting such a threatening visit from Bing and Charlie Manx so soon?

A: I was super excited. I think me and Jason David were super excited because it involved stunts. Throughout filming, anytime I had a stunt I’d go to him and just be like, “Stunts!” and we would just shout it. So, when we actually had to do a stunt like that, we were just being silly and shouting “stunts!” I was really so cool. I’d never done a fight scene before. I’ve never had to do even the smallest bit of action, so I was super excited to go like “Yeah, we get to do this, we get to take this thing and hit him in the face and fall down.” I was just like, “I need to do more of this. This is really exciting.” And Darri [Ólafur Ólafsson] was awesome. He’s just so talented, amazing, and wise. He was there for it too! He was just like, “Yeah, swing it into my face.” I’m like, “I don’t want to hurt you or anything,” and he’s just like, “It’ll be fine.” He’s committed, he’s really game for everything. As much as what’s happening to the characters is a serious thing, as actors we were just having so much fun that day. I think at one point my phone fell out of my pocket when I was running away. Blooper! I’d fallen on the ground or something and I had my phone in my pocket and my phone fell out. Darri picked up my phone and was just like, “Your phone” and he stayed in character. It was pretty funny!

Q: What was it like playing opposite Ólafur Ólafsson in this scene?

A: He’s such a warm, happy, extremely talented, and wise person. He’s just such a grounding force of kindness and such a good times guy. The guy’s just amazing.

Q: As an avid comic book fan, how do you think Lou feels about getting mixed up in a supernatural battle?

A: Lou is completely unprepared for that. Having physically tussled with him once, he knows how powerful Charlie Manx is. He knows how depraved and to what extent Charlie will go to harm him and potentially hurt his family. Having tasted that once, he knows that if they’re going to engage, they’ve got to play it safe. They have to play it smart. But he also knows that he can only protect the family to a certain extent. He can’t protect them as much as Vic can because he does not have the power, so the only way he knows how to protect his family is to protect his son.

He also wants to make sure nothing bad happens to Vic. So it’s dealing with trying to do what’s best for the family and also do what’s best for Vic. He’s also wrestling with what he wants Vic to be and what Vic wants to be. Lou wants the family to be together as a unit. He doesn’t want to change her personality or anything, but he does want her to stop chasing Charlie Manx. As the season progresses, he knows that he can’t do that. He has to let her be her and do this, but it scares him because he might lose her. It’s a very emotionally charged place he’s caught in, and I feel like his superpower is trying to keep it together, while he wrestles with all of it. 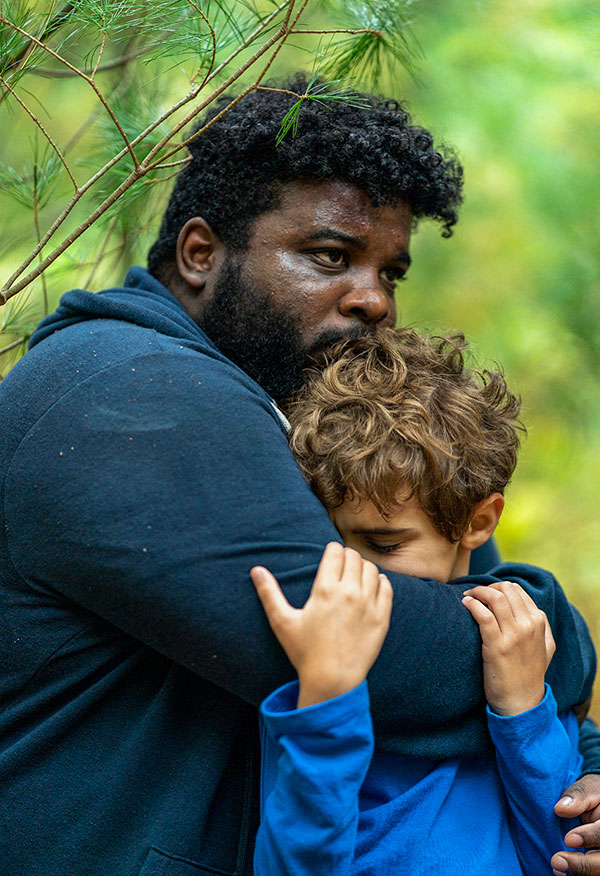 Q: For fun: Have you given any thought to what you think your knife and your inscape would be, if you were a strong creative?

A: I think my inscape would be just coming back to my family. It was kind of lonely being out there for five months, so just being able to instantly travel back home and just be like, “Hey guys, all right, I’m going back out.” My knife would be a Game Boy or a Nintendo Switch. I’d take it out, start playing it and be like, “Yeah!” and then I’d walk through any sort of doorway and then I’d just end up back home and then be like, “Okay, cool, guys, what’s going on? Everything good? Yeah? Everything’s okay? Cool. Okay, guys, gotta go back.” And then walk through another doorway and end up back where I was. That would be pretty cool!

Click here to see the battle begin between Vic and Charlie Manx in the latest episode of NOS4A2 available now on amc.com and the AMC app for mobile and devices. Check out the on-air schedule here for more encore viewings and upcoming episodes of NOS4A2 on AMC.

For more Q&As with the NOS4A2 cast and creators, check out this interview with Zachary Quinto, who plays Charlie Manx. Quinto talks jumping right into the action of Season 2, revealing the layers of the villainous vampire’s backstory and more.

Read a Q&A with Ashleigh Cummings, who plays Vic McQueen. Cummings talks with AMC.com about getting into the “motorcycle” saddle after the time jump, how Vic is caught up in a cycle of trauma, and how her fight against Charlie Manx is a new opportunity to face her demons. And don’t miss this Q&A with author Joe Hill, who teases the bigger world of Season 2, plus shares details about his unusual writing practice, how the NOS4A2 set is like stepping into his own inscape, and more.

Watch a sneak peek of next Sunday’s all-new episode here, in which the McQueens get ready for battle. But will Vic be along for the ride, or will she set out on her own against Manx?