At the crux of the quest to uncover more information about this organization, is none other than Althea. When an intrepid reporter with an insatiable appetite to break stories happens upon the secretive organization, there's zero chance she'll be able to let a story like that go. Indeed, thanks to her tenacity, thus far Al is the only character we've seen interact in person with a member of the secret organization known as the CRM.

More of the CRM's story will be delved into when The Walking Dead: World Beyond comes to AMC later this year. So there's no better time than now to analyze every last thing we currently know about Al's connections to the CRM and the wider world of TWD.

The CRM, once a momentary helicopter flying in the sky, is actually the Civic Military Republic—and it's no joke as Al found out. It's thanks to her unswerving investigation that we first found out about the CRM when we saw those letters attached to the three-ringed symbol on documents during Al's encounter with Isabelle (more on that below).

It All Comes Down To Isabelle

For Al, the connection to the CRM starts and ends with Isabelle, a CRM soldier. She's the member of the CRM we're best acquainted with, and perhaps our best window into who they are and what we can expect from them and their leader Elizabeth when World Beyond premieres.

So what did Al find? She finds a dead CRM soldier turned into a walker and kills it. On the soldier's person, she discovers the aforementioned docs with the three-circled symbol and "CRM" written on it. Isabelle knocks her unconscious and when Al awakes, Isabelle demands a specific tape from her.

The two then go on a journey together to get the tape, where we get tremendous insight into the goals and organization of the CRM. 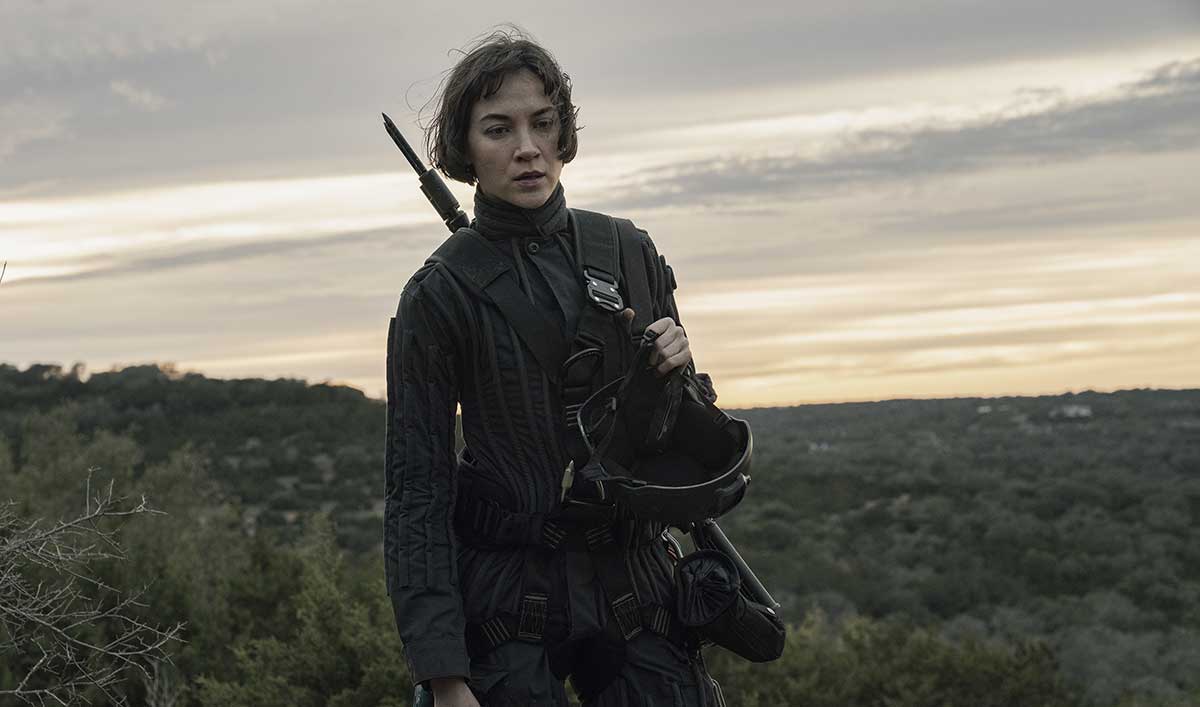 Isabelle tells Al, "If you see someone wearing this jacket, you should be afraid... We are a force who are not living for ourselves or for now. You have your stories, already making every day the past. We have the future." Although she leaves the organization unnamed and won't even mention its location, she reveals that the CRM community is focused on truly rebuilding society for the future. She says if Al doesn't show her the tape she wants, there might not even be a future to show Al's treasured story in.

She plans to kill Al, much as she killed her CRM partner and friend Beckett, to secure the operation and make sure Al doesn't talk about what she's seen. That's the level of commitment and stakes the CRM is working with.

Luckily for Al, the two woman bond romantically as they're forced to save each other's lives on their dangerous mission. Isabelle lets Al live but warns her, "I want you to live. Don't chase this story. Do not try to find me. I hope you get back to your friends and that you can all get home somehow."

What's Next for Al

Al promised she'd stop looking for Isabelle. For a time she keeps her vow, trying to keep herself and her friends safe, and even lies about the existence of the helicopter. But eventually she tells June about Isabelle. Later when a survivor uses a phrase similar to Isabelle's "It's not about today, it's about tomorrow," Al jeopardizes her and Morgan's lives looking for evidence of Isabelle, which she later admits to Morgan.

It seems Al's search for Isabelle and CRM isn't over yet. And while that may yield more danger for Al and her fellow survivors, it may lead to more answers for us.

How Exactly Does Rick Tie Into The Walking Dead: World Beyond?

Rick is alive and likely with the CRM now. Click here for a full breakdown of how Rick relates to The Walking Dead: World Beyond and the larger TWD universe.

How Exactly Does Anne Tie Into The Walking Dead: World Beyond?

Anne has a working relationship with the CRM and went with Rick when he was evacuated. Click here to see how Anne relates to The Walking Dead: World Beyond and the larger TWD universe.