Last winter, before the coronavirus swept through the globe, Norman and Dylan took on a 460 km (286 mile) road trip to explore the South Island of New Zealand. Over three days, the pair travel from Wellington to Christchurch, crossing through land Norman describes as, "one of the most isolated yet sublime corners of the world," by bike, boat, and...blokart? Discover every step of Norman Reedus and Dylan McDermott's motorcycle adventure in New Zealand in this latest installment of Norman's travelogue:

Since every morning adventure on Ride starts with a good cup of coffee, Norman and Dylan stop by Karaka Cafe. Norman orders the Kia Ora, and the barista tells him that he was recently on the "Vic Deals" Facebook page, which is one of the largest community groups for New Zealanders on the Internet.

After sipping their coffee on a nearby swingset, Norman and Dylan drive through Wellington Central, pointing out the interesting architecture along the way. Norman looks over to one curiously shaped building and says it looks like "Mordor" from The Lord of the Rings, but it's actually the Beehive, one of New Zealand's Parliament Buildings. 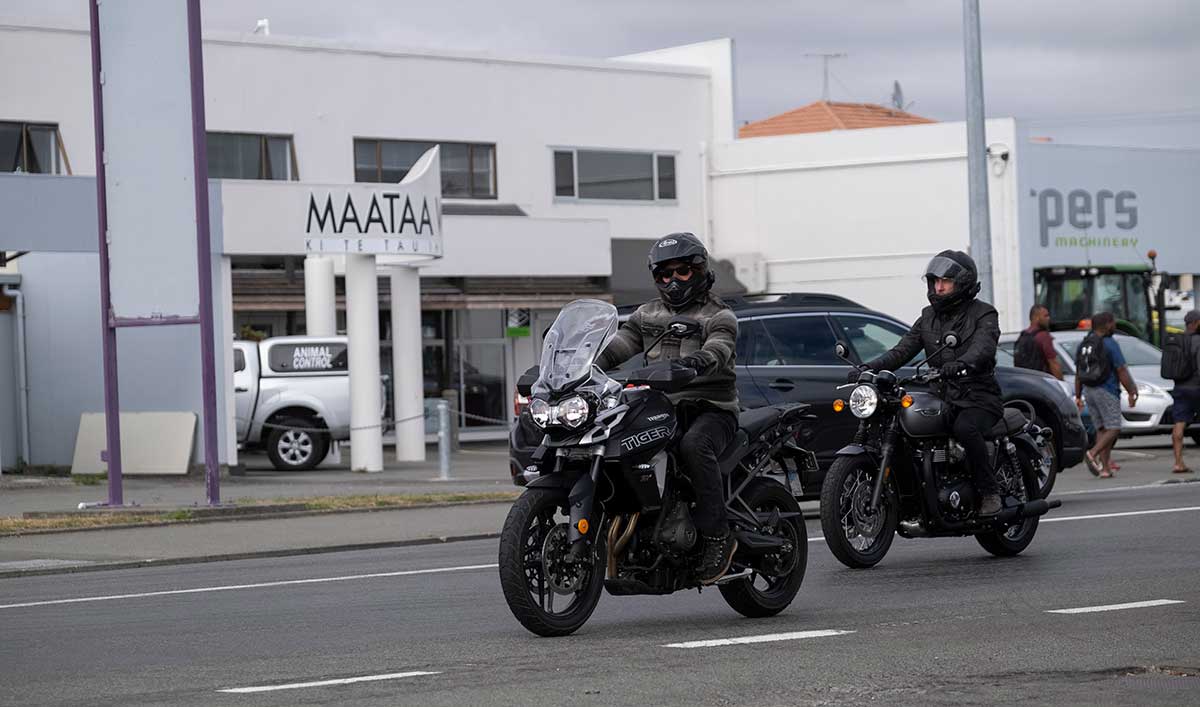 In an isolated, more lush part of Wellington, Norman and Dylan meet with Monique Fiso, a Māori chef whose local restaurant uses local foraged ingredients from the land. As Norman describes, "After several years at top New York City restaurants, Monique Fiso returned home to her Maori roots." Her Wellington restaurant, Hiakai, meaning "hungry" in Māori, specializes in local, traditional Māori ingredients. Hiakai was named among TIME Magazine's 100 greatest places of 2019, and more recently named one of Lonely Planet's top travel picks for 2021. While a visit to Hiakai is well worth it to sample Monique's expertise in traditional local ingredients, until global quarantines end, foodies can look into her newly launched cookbook.

Here's hoping Monique's commitment to elevating local ingredients will inspire Daryl to become a foraging culinary genius on The Walking Dead... but we won't hold our breath.

With stomachs full of Monique's elevated tailgate creations, Norman and Dylan head to the Interislander Ferry to make the 100km (62 mile) boat ride from the North Island to the South Island across the Cook Strait. Norman describes the Cook Strait as a "narrow but hostile stretch of sea" that separates the two islands of New Zealand. Due to the country's uniquely powerful winds, it is one of the most dangerous passages of water in the world. Still, the 3 hour ferry ride is trafficked by millions of people every year, and is widely considered one of the most beautiful ferry trips in the world and a singular New Zealand experience. Unfortunately for Norman and Dylan, they don't get to see as much of it as they would like, and succumb to a minor bout of seasickness along the way.

After settling back on land, Norman and Dylan ready their bikes and drive southwards through New Zealand's lush, green mountains to Blenheim, where they stop in to get one final night cap and mingle with the locals.

At 5 Tapped Limited, Norman and Dylan take in the artisan motorbikes on display, as well as the curiously positioned local roadkill taxidermy, while enjoying some good beer and good food before tucking in for the night. 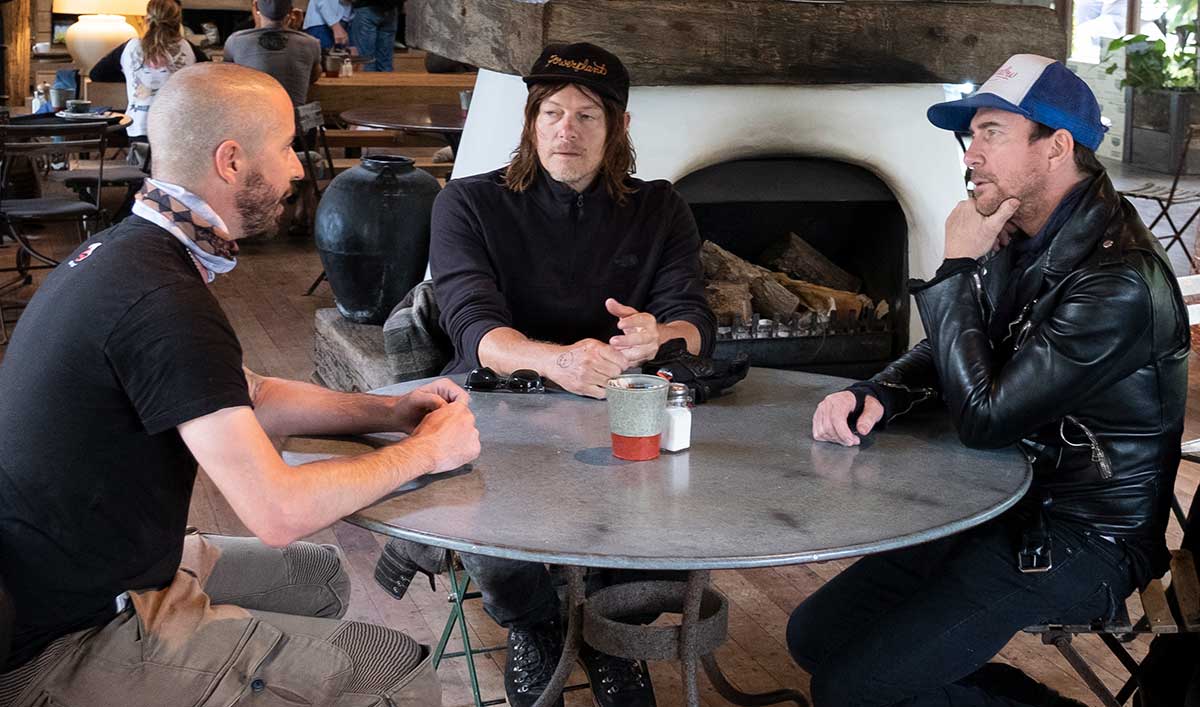 The next morning, Norman and Dylan meet up with Mike of Beatnik Motos, who organizes custom tours and motorcycle rentals for travelers. Mike guides Norman and Dylan down Highway One for a 150 km (93 mile) trip along the ocean's edge to the coastal town of Kaikoura. "This might put the PCH to shame," says Norman over the headset to the group as they ride along cliffs above the Pacific Ocean. "Every time you round a corner, it's just breathtaking."

Just before arriving in Kaikoura, Norman and Dylan bid goodbye to Mike, and then head off to explore one of the most important parts of New Zealand's culture and economy: adventure sports. "For generations, the lifeblood of the New Zealand economy has been farming, but today old family farms are finding new life through other means," says Norman. At Glenstrae Farms, those other means are a thrill-enthusiasts dream: an exhilarating ride through the family's 1,600 acre farm on ATVs, plus other 4 wheel adventures. Alistair, the owner, takes Dylan and Norman through his breathtaking family property, and the three of them bask in the surreal beauty of the landscape. 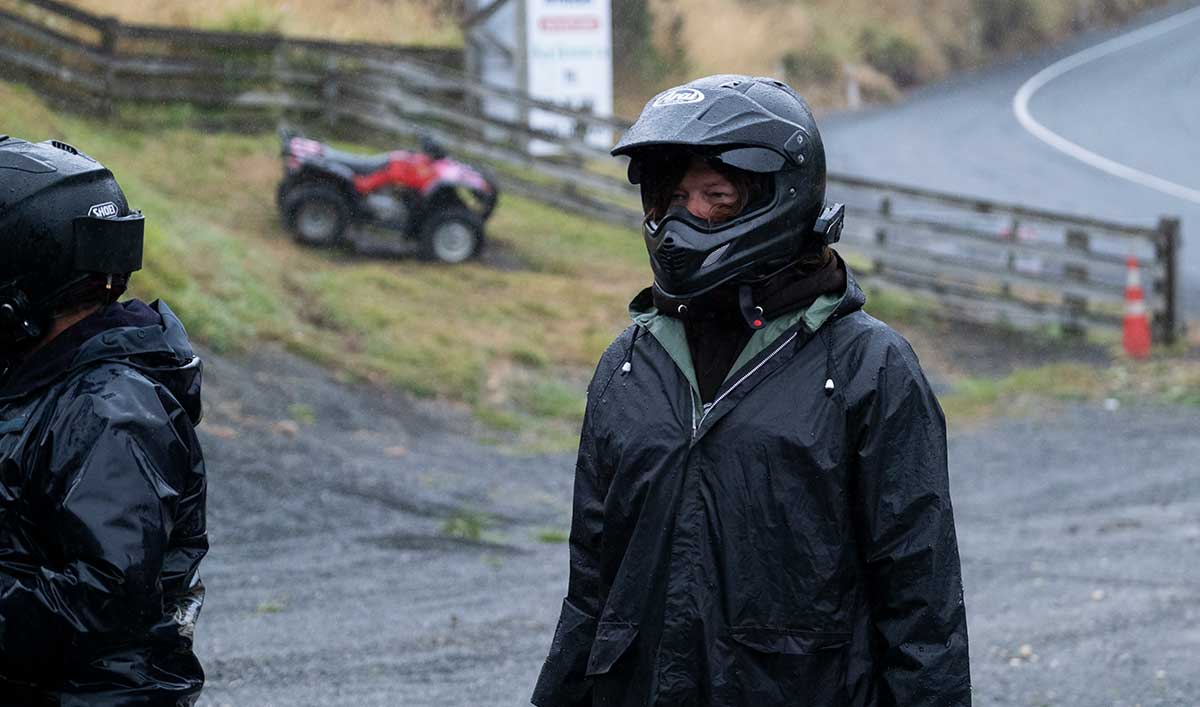 Leaving Kaikoura, Norman and Dylan embark on a 96 km (60 mile) ride southwest through the hills of Hurunui and straight into sheep country. They meet Terry Bamford, the owner of Hurunui Hills Sheep Farm, who tells Norman and Dylan about the importance of sheep's wool to New Zealand's economy (and shows off how amazing herding dogs are). Hurunui Hills offers visitors not just farm tours, but a full farm experience, and advertises that "every day is a completely new experience."

From Hurunui, Norman and Dylan make the 84 km (52 mile) trip to Christchurch, the largest city in the South Island. Their first stop in the city is a visit to sculptor Phil Price's studio. The world-renowned sculptor harnesses the power of wind with beautiful, mesmerizing, and kinetic artwork -- and he's also a vintage motorcycle enthusiast. Norman and Dylan help Phil kickstart a classic Velocette bike and take it for a spin down the street.

Leaving Phil's studio, Norman and Dylan ride down to the ocean's coast to dabble in a little of the Kiwi zest for "daredevil antics," as Norman says. Norman and Dylan discover blokarting: part sailing, part gokarting. They embody the Kiwi attitude of "give it a go" and decide to race down the beach in their high-speed, wind-powered blokarts. Fans looking to try out blokarting themselves don't need to go all the way to New Zealand; you can find local blokarting events on the official blokart website here.

With windswept hair and the signature "blokart grin," Norman and Dylan head into the heart of Christchurch on their bikes, passing by Phil Price's wind sculpture "Nucleus" on their way. They make their final stop at Smash Palace, a local bar and burger joint, and home to the community's local biker scene and a delightful amount of dogs. Their "Thursday Bike Nights" are a world famous destination for auto-enthusiasts. Norman and Dylan take some tiny minibikes for a spin around the block, before saddling up in their regular bikes, with the rest of the local Smash Palace biker crew, and ride down to a large event with a fireworks show nearby. Along the way, the group gets pulled over by local police for the first time in Ride history, but hopefully no reader of Norman's Travelogue will need to worry about that.

"Take a trip to New Zealand and it isn't long before you're under its spell," says Norman as the sun sets on his final day in New Zealand. See all of the sweeping vistas and action for yourself in the latest episode of Ride With Norman Reedus now, available to watch on amc.com, the AMC apps for mobile and devices, and on AMC+.

Read a Q&A with Norman Reedus here, in which Norman chats with amc.com about his New Zealand motorcycle trip, his new friendship with Josh Brolin, and how the pandemic made this season "unique" and unexpected.

For more of the latest episodes, travelogues, ride diaries, interviews, and more, sign up for the AMC Insiders’ Club.