Movies That Should’ve Been Video Games

Movies and video games have served as mutual inspiration for one another for almost as long as video games have existed. When video games reached mainstream status between the '70s and '80s, film studios jumped on the opportunity to expand engagement with their most popular titles. They began developing these titles into interactive worlds, where people could get lost for hours upon hours.

Before video games were even a thing, the same was being done with board games. Jaws, The Thing, Alien vs Predator, and Dune were all translated into board games following their premieres on screen.

And the inspiration goes both ways. Clue may be the first game to ever be translated into a movie, but many others have followed. Movies like Lara Croft: Tomb Raider starring Angelina Jolie, and Resident Evil starring Milla Jovovich, managed to bring their players to the screen using powerful actors, lots of makeup, and special effects. Meanwhile, this year's Sonic the Hedgehog paired Jim Carrey with a computer-animated version of Sonic.

In thinking about this symbiotic relationship, we couldn’t help but wonder: what about the movies that never became video games? With that thought in mind, we made a list of movies that we think could have made that leap.

One thing that makes a movie a good fit to become a video game, is having a main character that people want to be. While Ferris had his faults (like any well-rounded character does), playing hooky, heading to the city to dine in fancy restaurants, and dancing in parades, makes for a pretty epic day. Of course, he encounters some challenges — in his case it's not getting caught for skipping out on school with a phony cold. That may seem easy, but there are roadblocks at every stage. Everything from pretending to be sick, to picking up your girlfriend at school so she can play hooky with you, comes with its challenges. If you’re not careful, you could get caught before you’ve even made it out of your sleepy suburb.

While no one ever made this 80s classic into a video game, we did discover this "gamified" interpretation that gives us a solid look at what our beloved characters would look like if they had been made into a 8-bit video game.

Creation of the Humanoids

This 1962 film is prime for a video game adaptation. You step into a post-nuclear war society where the majority of the population has been wiped out. You and the remaining members of society must rely on “humanoids,” which are robots created to serve humans. What you may not know: the memories and personalities of deceased humans are being transferred into these humanoids, allowing the robots to become everlasting replicas of those lost. The catch? Because we know there's always a catch... These humanoids are completely unaware that they're robots. To them, they're the very person their memories and personality reflect.

But wait, there's more! No post-apocalyptic society is complete without some baddies. Cue the Order of Flesh and Blood. As you may have guessed from their name, they're staunch supporters of human beings in the traditional sense, and they'll stop at nothing to eliminate humanoids. So which side will you be on? Who will you fight for? And what will you discover about yourself in the process?

From what we can find, it looks like there may be a Dumb and Dumber slot machine out there somewhere, but it doesn’t look like anyone adapted this film into an actual video game. Now, we know going into this one that the number one thing we’ll be up against is our own low IQ — Harry and Lloyd are something special. Then there's the race to get Mary her suitcase, and the mysterious mob-like duo trying to stop us. Plus, you can't forget the fact that we're completely blinded by our crush on Mary. Swoon.

Since Harry and Lloyd aren’t your typical video game characters, how you get from one level to the next may not be obvious. Will we realize that being annoying is actually one of our weapons? Will we get to drive the Mutt Cutts van? Will it be obvious that putting hot peppers on the bad guy's burger will give him a heart attack? We may never know... 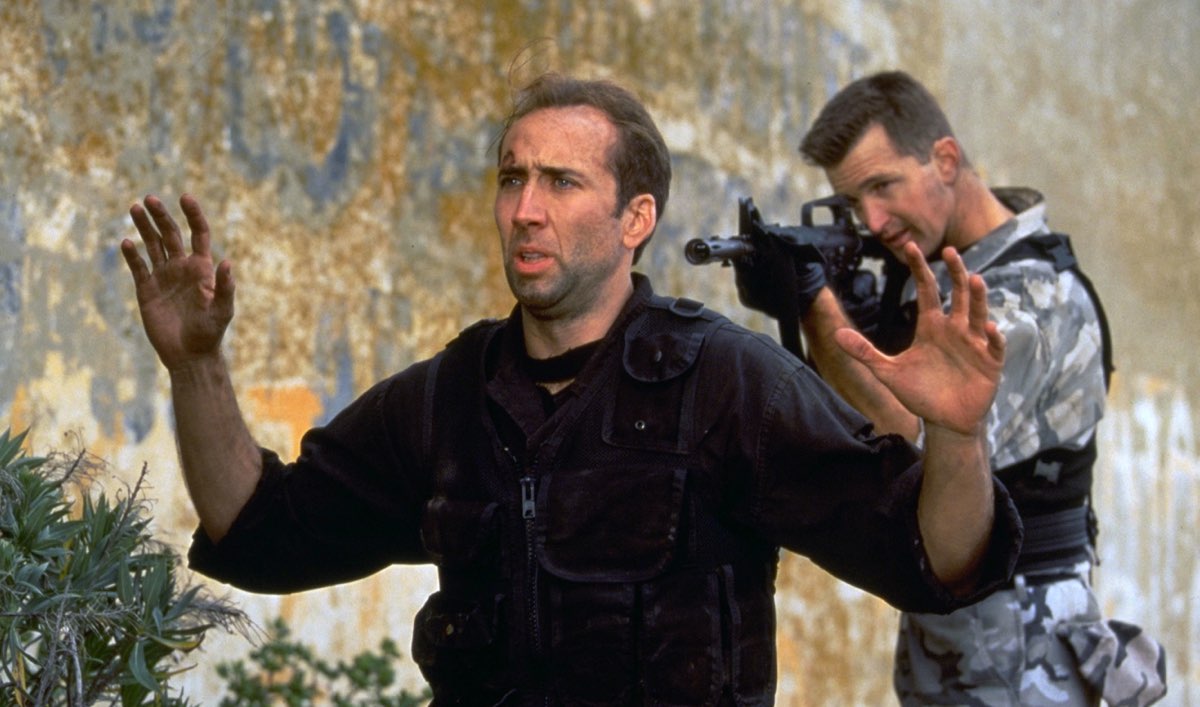 Take Sean Connery, Nicholas Cage, and Ed Harris. Put them in a movie directed by Michael Bay. What do you get? An action-packed thriller that has you on the edge of your seat from start to finish. So you can imagine how badass and heart-pumping the video game would be.

First, you must choose who you want to be: FBI chemist or former Special Air Service Captain. As you know this decision will impact the skills and tools you have at your disposal later in the game. Choose carefully. Then, you’ll be briefed on the mission: put a stop to a rogue group of U.S. Force Recon Marines who have taken control of Alcatraz Island. They want $100 million, they’re taking hostages, and they're threatening to launch rockets into San Francisco unless they get their money. No pressure!

Picture this: you’ve set out into the deserts of Nevada in search of fortune. As luck would have it, you strike gold. Then the chaos ensues. First you must fight off your own partner, the man you set out on your journey with, who (of course) is now trying to kill you. But he’s not the only greedy one you’ll meet along your journey. You must fend off every man in your path that wants to take your gold from you, even if it means taking a life. Neither friends nor strangers can be trusted.

You know how to use a gun and you know how to fight. You can call on people you know for help, but with them may come others that have bad intentions.

Comedies, thrillers, action movies, they all have the potential to be your next favorite video game. Whether you’re the type of player that likes to fight for their life, or the kind that just likes to explore new worlds and meet friends along the way, the possibilities are truly endless.

Next Up: We All Love a Vampire — Pop Culture's Many Blood-Sucking Iterations

Get more AMC Talk directly to your inbox when you sign up for AMC's Insider Club.