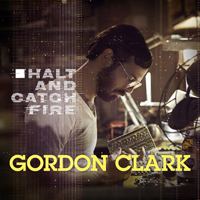 Gordon Clark has come a long way since he joined Joe MacMillan's rogue PC project. His confidence dashed by the failed Symphonic, Gordon is finding himself again as lead engineer. But his growing obsession with the computer is pushing him precariously close to the edge. What does a man on the brink of either greatness or disaster listen to? Warren Zevon, Bob Dylan and Pink Floyd, to name a few. Listen to this updated playlist of '80s music for Gordon Clark on Spotify created by Halt and Catch Fire's Music Supervisor Thomas Golubić and his team at SuperMusicVision, then be sure to check back each week for updated playlists based on Halt and Catch Fire's characters.

1. George Harrison, "What Is Life"

4. Elvis Costello and The Attractions, "I Can't Stand Up for Falling Down"

7. Squeeze, "Pulling Mussels (From the Shell)"

11. Warren Zevon, "Gorilla, You're a Desperado"

12. Bruce Springsteen, "Out In the Street"

13. Southside Johnny and the Asbury Jukes, "I Don't Want to Go Home"