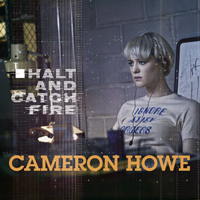 When Cameron Howe (Mackenzie Davis) first arrived at Cardiff Electric, she brought a punk sensibility to the company's conservative corporate environment. Cameron's taste for loud, abrasive music -- which she blasted constantly while coding the PC's BIOS -- didn't exactly endear her to her coworkers. But now, Cameron is slowly learning to work with others and has become the leader of a motley team of coders. Check out her evolution in this updated playlist of '80s music for Cameron Howe on Spotify, curated by Halt and Catch Fire's Music Supervisor Thomas Golubić and his team at SuperMusicVision, which traces Cameron's transition from punk to post-punk with a mix of new wave and indie artists like Sonic Youth and The Cure. Listen below, and be sure to check back each week for updated playlists for Halt and Catch Fire's characters.

Look after the jump to download songs from Cameron Howe's '80s playlist now.

3. The Motors, "Dancing the Night Away"

11. Siouxsie and The Banshees, "Israel"

18. Telefones, "The Ballad of Jerry Godzilla"

21. The Raincoats, "Fairytale In the Supermarket"

Click here to see Spotify playlists for other Halt and Catch Fire characters including Joe MacMillan, Gordon and Donna Clark, and John Bosworth.