Zap2it Goes Behind the Scenes of Season 3; Positive Reviews for Season 2 DVD 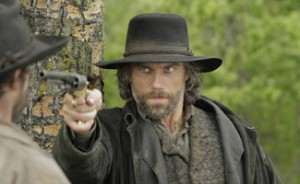 This week, Zap2it debuts a behind-the-scenes look at Season 3, while the Season 2 DVD gets some good reviews. Plus, a couple of trailers and cast portraits provide more Season 3 previews. Read on for more:

• Zap2it offers an exclusive look behind the scenes of Season 3 and predicts “it just might be the best season yet.”

• Reviewing the Season 2 DVD, The Virginian-Pilot suggests, “Anyone who loves western history laced with a certain amount of fiction, outstanding acting and historical detail needs to check this out before saddling up for Season 3.”

• The (Pottstown, Pa.) Mercury says, “One of the reasons the show works so well is that its stuffed with great supporting characters,” including Christopher Heyerdahl’s The Swede.

• CarterMatt has a Season 3 trailer that highlights the show’s move to Saturday nights, while Screen Crush offers another trailer, titled “Raise Hell.”

• Daily Billboard highlights a “giant” Season 3 billboard in Los Angeles that depicts Anson Mount looking “very much the cowboy astride his steed, pistol in hand.”

Elliot Finch (Sope Dirisu) takes on a bar full of goons in a brutal fight scene to track down one man who might know more about Finn Wallace's murder.

(SPOILERS) Inside the Walking Dead Season 10: Cast and Creators on Negan's Backstory

Watch the opening minutes of the return of Fear the Walking Dead.

Negan makes a heartbreaking discovery and emerges a new man.

Jeffrey Dean Morgan and Hilarie Burton Morgan talk about playing husband and wife on screen in the middle of a pandemic.

Fear the Walking Dead: A Look at the Second Half of Season 6

The cast and creators preview what's to come for Morgan, Alicia and Strand and tease a new group unlike anything you’ve seen before.

The stars of The Walking Dead set the stage for the final season.

The Brits Are On the Rise This Awards Season

How to Watch Gangs of London Season 1