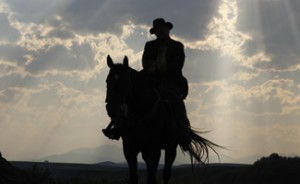 This week, Anson Mount talks Season 4 with Collider. Plus, CarterMatt posts photos of some new Season 4 characters. Read on for more:

• Anson Mount, talking to Collider, shares that Season 4 will be very different for Cullen, "in the sense that he’s been forced to mature, for lack of a better word, in a variety of ways. It’s about trying to get him on board with that while, at the same time, maintaining the old hair triggers and the old desires."

• CarterMatt.com checks out photos of two new characters, played by Jake Weber and Jonathan Scarfe, on the Hell on Wheels set.

• Ireland's Independent.ie reports that Colm Meaney posed as Oscar Wilde for the Sky Arts Portrait of the Year TV show.