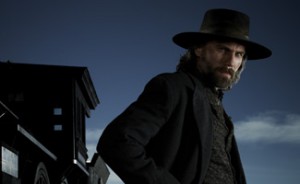 This week, Anson Mount’s comic timing is praised by Entertainment Weekly, while he shares his advice to young actors with Zap2it. Plus, The Atlanta Journal Constitution talks about the trend of shows, like Hell on Wheels, airing on Saturdays. Read on for more:

• Entertainment Weekly says a preview of “One Less Mule” not only shows Anson Mount’s “comedic timing, but also just how beautifully you can frame a shot in Calgary, where the series films.”

• Anson Mount tells Zap2it that early acting success can be damaging: “If I'd gotten everything I wanted in my 20s, I'd be dead or in jail.”

• The Atlanta Journal Constitution cites Hell on Wheels as an example of shows airing during “the supposed Saturday death zone.”

• Common is interviewed by EURweb about Elam and Cullen’s relationship against the backdrop of race.

• Victor Slezak talks to his hometown paper, The (Youngstown, Ohio) Vindicator, about playing Ulysses S. Grant in “One Less Mule.”

• For recaps and reviews of Season 3, Episode 6, “One Less Mule,” check out Basket of Kisses, Starpulse, TV.com and TV Fanatic.

From Carol and Daryl to Strand and Madison, The Walking Dead Universe's Best Duos