Bridge Constructor: The Walking Dead, a new game which combines the challenging puzzle gameplay of Bridge Constructor™ with the post-apocalyptic zombie universe of AMC’s The Walking Dead is available now. If you've ever wondered what goes into a designing a game, look no further. Below Matthias, the creative lead behind the game, explains how it's done and what goes on in his head while he's designing a game.

What’s the Fun in Bridge Building?

Bridge Constructor is all about the challenges of constructing bridges with a selection of materials at hand and testing them under different weight loads. If you build successfully, your cars, trucks or trains will make it across. However, on your way to that successful moment, the whole thing will collapse many times – and watching everything tumble down is actually a big part of the fun and probably one of the main reasons why the genre is so beloved by gamers and content creators alike.

Refining the Base Recipe

After Bridge Constructor being a classical approach to the genre, we tried to enhance the experience and find interesting new elements with every sequel: There was the sandboxy BC Playground with badges for different challenges, followed by BC Medieval placed in the Middle Ages and offering new mission modes like building roofs on the bridges against enemy cannon fire. Then came an action-focused BC Stunts, where you have direct control of your vehicles, more along the lines of the Trials games.

We already began broadening the concept of “bridges” with BC Stunts, where players constructed jump ramps and loops to have the vehicles perform daredevil stunts. We liked the dynamic aspect of it, so Headup’s CEO Dieter Schoeller ventured forth and asked: Could we combine the dynamic gameplay from BC Stunts with the equation of “Entrance velocity equals exit velocity” from the PORTAL games? Bingo! Bridge Constructor Portal came quite unexpected for the most but matching both games’ puzzle mechanics proved to be a big success.

Now the following idea was: What if we create a game in the tradition of Lemmings and The Crazy Machines but use zombies instead of little rodents? With the guys at Headup being great fans of the Walking Dead brand, the idea was spontaneously pitched to AMC. And funnily enough, we were jointly able to secure a deal.

Half of the team remembered that one of Lemmings’ big appeals was the sheer mass of little sprites on the screen and that the game should have hordes of zombies in every mission. The other half suggested that ragdolls would make for a very entertaining element in a real-time physics game. To simulate masses of ragdoll walkers would, however, consume too much computing resources. We decided for the ragdolls with a reduced number of walkers. This enabled us to offer a greater diversity of puzzles, e.g. including the use of mobile environment objects to devise lethal traps for the walkers.

Let’s have a look at an example where players need to build a bridge connected to a movable container. 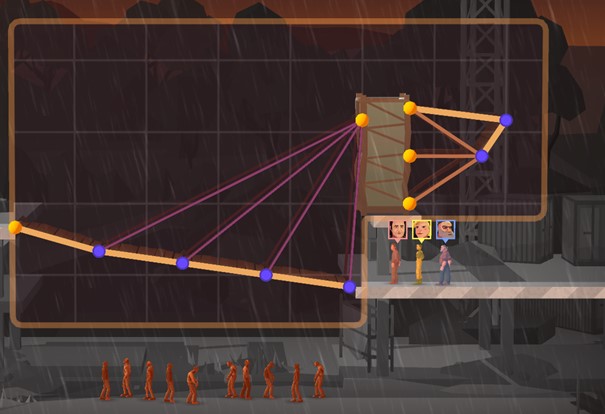 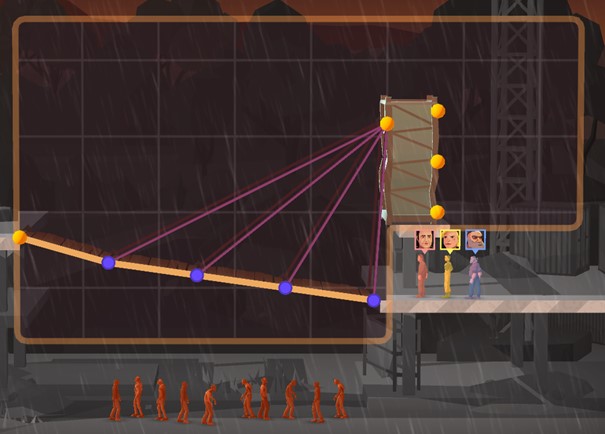 The bridge has been built but the problem will be that the weight of the bridge will make the container topple onto the bridge and destroy it with the survivors on it. 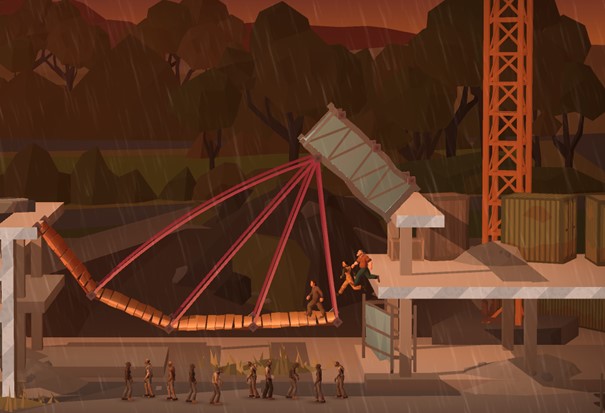 So players need to create a counterweight on the other side of the container to keep it in its position.

As a special challenge, players can try to balance the counterweight in a way that it delays the fall of the container just long enough for the survivors to reach the other side and then falls onto the walkers to kill them.

For BC TWD, we designed scenarios where characters run around, as a refreshing addition to purely vehicle-based levels. And the characters can do a lot of stuff: shoot, throw grenades, climb ladders and activate objects in the scene. And we enabled players to control these actions: We added waypoints where players can choose from a palette of actions to tell characters what to do when they get there. Just like a reversed Lemmings: You give commands to the protagonists to lead the undead into disaster. And fully enjoy the internally called “Lemmings Schadenfreude Effect”. 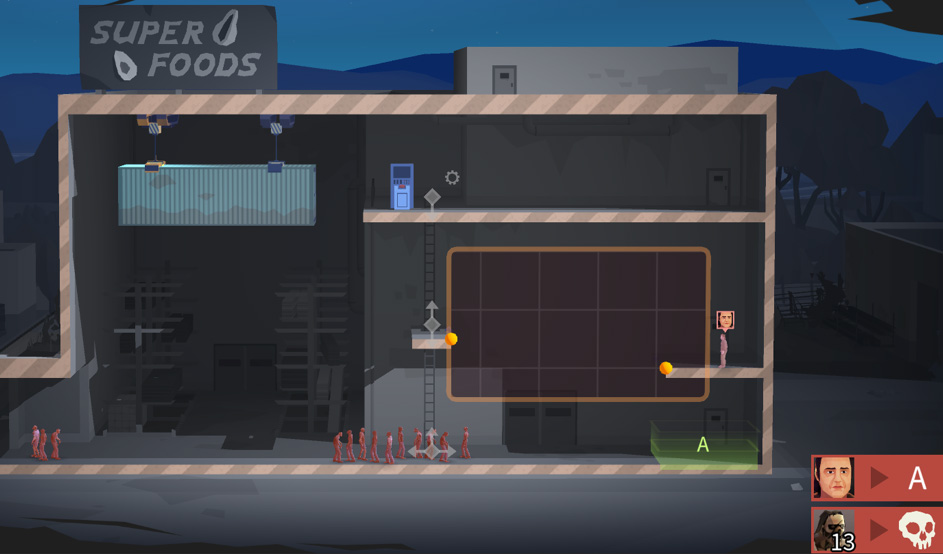 In this example, Eugene needs to get to target area and therefore get rid of the walkers on the floor. He wants to kill them with the giant container suspended under the ceiling. So players have to build him a bridge to get to the ladders and climb up to the control panel that releases the container. But he also needs to throw a noise bait (a speaking doll) on the floor underneath the container to lure the walkers there and have them crushed. 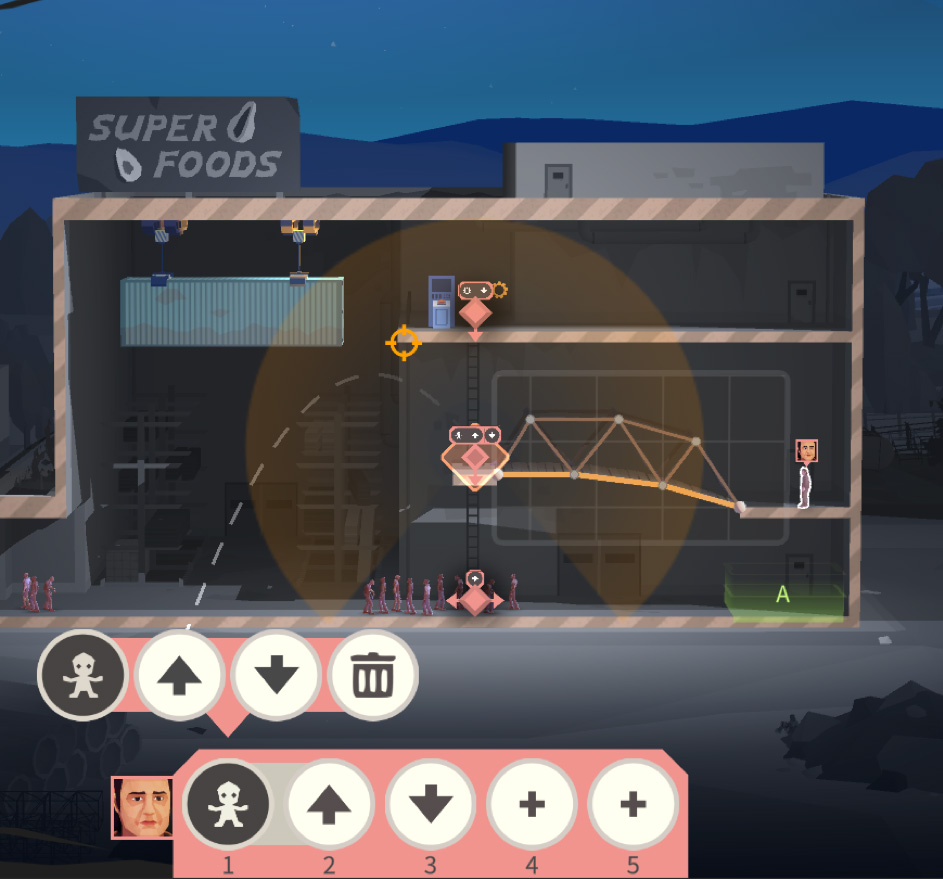 At the waypoints, players can give Eugene orders where to go and to throw the doll including defining the necessary trajectory for the doll to land underneath the container.