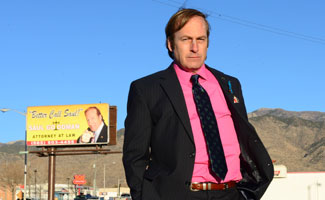 This week, Bryan Cranston talks to The Daily Beast about directing an episode of Better Call Saul. Plus, Deadline thinks spinoffs like Saul are becoming more popular of late. Read on for more:

• Bryan Cranston speaks to The Daily Beast about directing an episode of Better Call Saul, saying, "They’ve got the same crew, and it’s exciting to think that we can rekindle that flame; that it’s still alive."

• Deadline examines how different shows end, noting, "It used to be that reruns were the only ways to relive our favorite show’s best moments, but spinoffs have taken off the past few years," and cites Better Call Saul as an example.

• IFC reports that Bob Odenkirk has recorded a new comedy album and will be on tour in the fall, reminding fans that it's "Not a bad consolation prize for those of you bummed out about Better Call Saul‘s premiere getting pushed to 2015."