Breaking Bad and Better Call Saul director Michelle MacLaren, who directed "Nippy," discusses shooting in black and white, that Heisenberg reference, and the complexities of constructing a montage.
What was it like working with the legend that is Carol Burnett?
Amazing. It was everything you would hope and imagine and more. She is phenomenal. She is such a pro. She's so down-to-earth. She is incredibly funny. She's really kind and generous. She's a collaborator. She's very direct-able. She's brilliant! And she's not just brilliant at comedy. She's brilliant at drama. There's funny moments and there's dramatic moments, and she has it all. I can't say enough about her. When they called me and said, "Michelle, can you do this?" I was so honored that they asked. And they said, "And we want to tell you Carol Burnett's in it." I was like, "Are you kidding me?" What an incredible honor. I adore her! It was such a privilege. I feel so fortunate to have worked with her.
What was the collaboration with her like around building the Marion character?
We talked a lot about who Marion is and her relationship with her son. Part of the comedy is she's kind of tough on her son and a little bit critical of her son, and she's so happy that Gene is paying attention to her. He's so brilliant and it's a fine line—you don't want to make her look like an idiot because she's not. She's not some ditzy woman. She's a sharp, smart cookie. She's been around the block. And Gene is a very skilled con man and he's coming back into fully embracing Saul and we get to see him up to his old tricks here and he is a master manipulator. And Gene plays it beautifully—he sucks her right in. You have to be a clever con man in order to pull someone like Marion in. I love the scene that Alison [Tatlock] wrote in the grocery store when we first meet her. You learn pretty quickly she knows what she wants. She doesn't suffer fools, but she's also a nice person. For Gene, I would imagine that he gets enjoyment from a challenging con, but I think there are moments here where even he feels guilty.
This is the first episode that takes place solely in the black-and-white Gene timeline. Were you excited about this unique opportunity? What were the challenges involved with that?
Peter Gould did a really interesting thing — he gave the most incredible master class on how he sees the light choices affecting the characters at any given moment and using the light and the dark of black and white to enhance those moments. So, there's very specific moments when you'll see, like in Marion's garage where Gene first appears, that he's very much in shadows and then he steps out into the light. Or at night when he's outside Marion's house taking the garbage out with Jeffie and he's got a partially dark shadow on his face. Then, when Gene's just pulled off fooling the security guys—he's in the department store and he's pretending like everything is just really great and he's skipping along with his Cinnabons and he steps around into shadow and darkness and all of a sudden his joy is a different type of glee so to speak. It's "I just pulled off a big con" but it's not just that because at that point Frank got to him, right? He broke him down emotionally, so it's not just a "Hey, I got away with it" moment. It's a really deep moment of having to deal with his own emotions and his own feelings about his brother but, again, all coming from darkness, so we very specifically had him step out of the light into darkness. It was very, very intentional to play with the film noir feel of it and really specifically play with light. [Director of photography] Paul Donachie did a brilliant job of lighting everything. And so that challenge that Peter presented was really exciting and really fun. 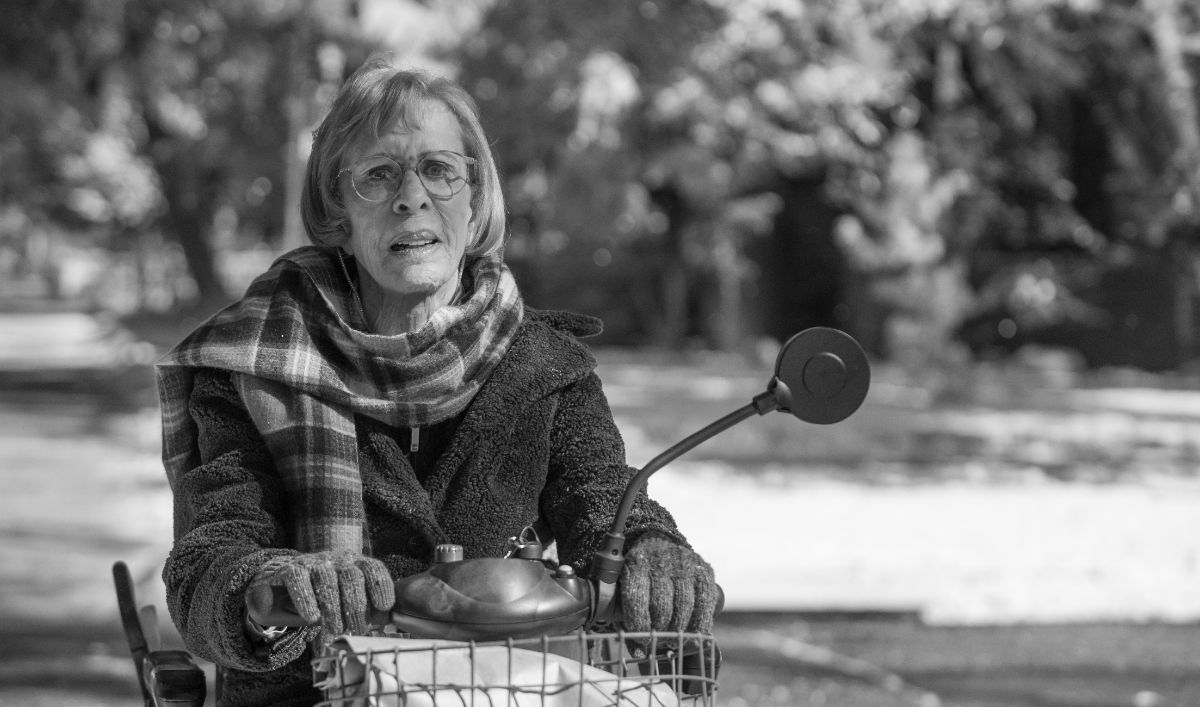 Gene talks to Jeff about Walt, without explicitly mentioning his name. This was a thrilling moment for any fan of Breaking Bad. How did you make sure that the reference landed just right, without calling too little or too much attention to it?
Well, Bob Odenkirk is the master, like Bryan Cranston and Aaron Paul and the whole gang. He knows the meaning of the word "nuance." Bob really has a spectacular grasp of where to put emphasis, where not to put emphasis, how to throw something away without it really being thrown away, that kind of thing. Bob just knows how to do it so perfectly. He doesn't lay it on too thick. He's brilliant at the art of subtlety. I just love working with Bob. He's so brilliant at the comedy and at the drama and, like everything we did in Breaking Bad and Saul, you play it straight and then the comedy is in the ridiculousness of the situation. These guys all know how to do that so well. And it was really delicious to talk about Walt! It was super delicious. You had to be subtle about it. You had to be clever about it. The thing Bob and I talked about is that moment's got to be really scary for Jeffie. Jeffie's got to feel very threatened because he knows Gene's talking about Heisenberg and that's really, really scary, and so just the cool subtlety of that is terrifying in itself. The simpler the better. It's a great moment.
Can you talk a little bit about Gene's long con of ingratiating himself with the security guys and how you were able to so successfully portray that whole process and all that it involved on screen? How difficult was it shooting each moment of that long extended montage and putting it all together?
It was very challenging. The thing that making Breaking Bad and Saul really taught me, thanks to Vince Gilligan and Peter Gould and all the great writers, is everything is approached as realistically as possible. So, we did that. I looked at: What is Gene's walk What is his process? What are the different levels? And then emotionally, what are the different beats every time? I constructed an arc to every moment because there has to be a practicality of shooting it; we can't shoot everything in story order because you walk through the mall so many times. So, we had to phase it where the different phases represented a different emotional state. At the beginning, Gene was very trepidatious. He wasn't sure what he was going to do. I mean, he was going to walk into the security office and he could get arrested or his whole cover could get blown. As he gets more confident, his walk gets stronger as the con starts to work. He starts getting a little skip to his step. So, we had a plan and we had different emotional levels for the execution of each plan. Bob was so gung-ho and so collaborative and he completely understood all the different levels. He got it and, as he always does, he brought it.
And then of course the Cinnabons. First of all, I was so excited about Jim O'Heir [who played Frank]. He's the number one person to play that part. I called Jim when we were in prep and I said, "So, Jim, do you like Cinnabons? You're going to have to eat a lot of Cinnabons and I just wanted to prepare you for that." He laughed and he said, "You got the absolute right person to play this part." He loves Cinnabons! But, I don't know if you can even eat a whole one because they're just so heavy. He was such a trooper with that.We had all these different tricks, but he did have to eat a few Cinnabons.
What these montages take is a ton of planning and really understanding the arc of each moment and what are we going to do to advance the story in each moment. It's incredibly time-consuming and thankfully AMC and Sony gave us the time to do it and to do it right. And we shot in a real mall. That was the other amazing thing. We shot in a department store. That department store was completely built by our art department in an empty department store that was actually in the mall. Nothing was there and they created a department store! We had to plan all that out as well, where everything was going to be and that was all dependent on how we were doing the heist, and then we had to match that to the snowy field. It was very funny because, when you first read the script, you think, "OK, it's relatively contained. A lot of it's in a department store." And then it's like, "Oh my gosh, this is really complicated." In a fun and challenging way. You just hunker down and you figure it out and then you go shoot it. 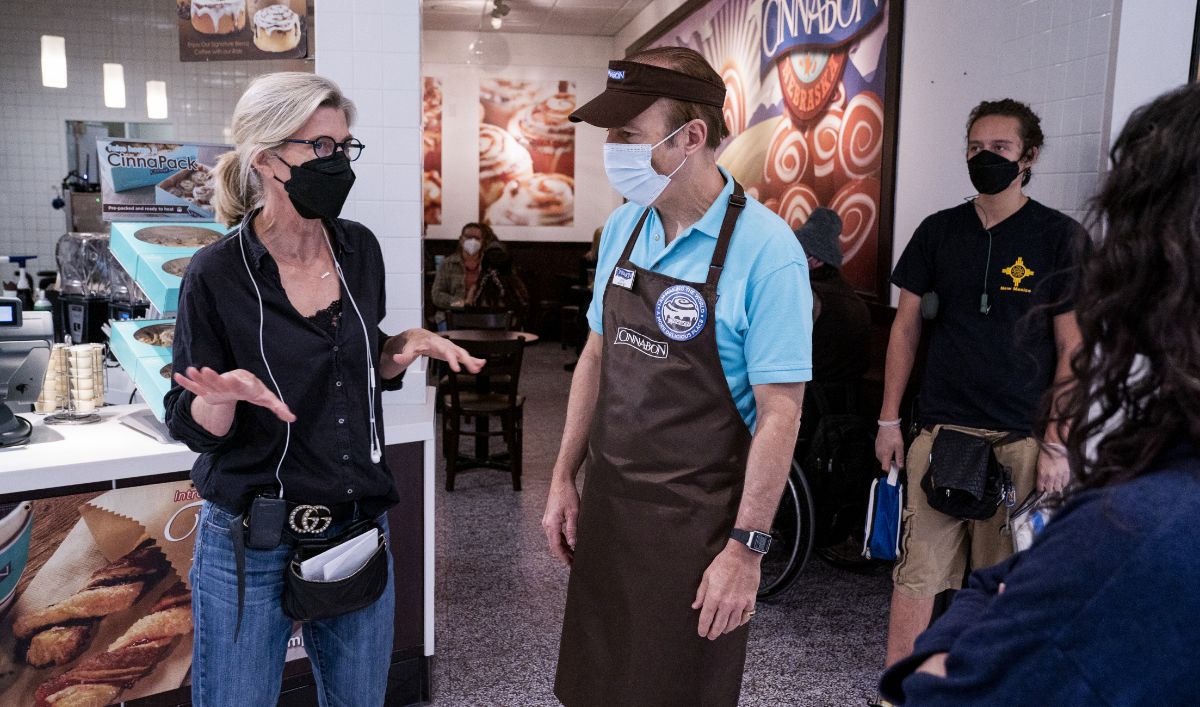 Celebrating the Final Season of The Walking Dead with Canva