Better Call Saul co-creator and executive producer Peter Gould – who wrote and directed the series finale, “Saul Gone” – discusses the host of familiar faces that appeared in the last episode, how Jimmy’s courtroom confession is “the last moment of Saul Goodman,” and why he thinks Jimmy and Kim’s story will continue to be written by fans of the show.
In addition to bringing Better Call Saul to a close, these final three episodes revisited Breaking Bad with three scenes featuring Walt and Jesse. Why did you want to revisit those characters while wrapping up Jimmy and Kim’s story?
Better Call Saul is a story of Jimmy McGill aka Saul Goodman aka Gene, and this is a guy who seems to have a repeating cycle. He gets angry or he's trying to get away from something in himself and he makes these terrible choices. You can see in these scenes with Walt and Jesse how their worlds overlap. First of all in Episode 11, Tom Schnauz, who wrote and directed it, did a wonderful job of paralleling his bad decision-making with getting involved with Walt with this outrageous risk he takes at the end of the episode. Then in Episode 12, you saw that Jesse and Kim cross paths and those two characters have so much in common. Kim has just come through this awful encounter with her own darkest side and the cartel and Jesse's about to go through pretty much the same thing, and they cross like ships in the night. Then in 13 of course, here you have Walt and Saul and they're having their final encounter together, and yet still neither one of them can really say out loud the truth about what's going on inside them. And this particular episode asks the question, "Is this guy ever going to progress or is he going to be stuck? Is he going to be stuck as the same guy with the same set of responses forever?"
While Walt and Jesse may be the marquee guests, we also got the surprise of seeing Betsy Brandt as Marie Schrader in the finale, representing the victims and keeping our minds on the costs of what Jimmy/Saul and Walt have done. Why was it important to bring her back?
It's exactly what you said. In Episode 9, "Fun and Games," Kim says, "We're not just bad for each other. We're bad for everybody around us." Then Jimmy, he goes ahead and continues down that same path. And here is Marie, who is another widow not unlike Cheryl in her own way, but she is righteous, and she is angry and she judges him. I think she's got a lot of moral authority as the victim of this whole Walter White organization that wouldn't have existed without Saul Goodman.
As you were crafting the final season, how did you decide that the Gene portion of the story would encompass these final four episodes? And were you ever worried about that period where Kim’s status was unknown?
We were very excited about the Gene segment of the story because it's the sequel when the rest of the show has been a prequel to Breaking Bad. But now we could go anywhere in the Gene world and we thought it was fascinating to take this guy's identity away from him and put him in a new circumstance and see what he creates. And what he creates is, weirdly enough, a version of where we've already been, but it's a version that doesn't have a soul. Gene's never satisfied with anything that's going on. Jeff and Buddy are thrilled with all of it, but Gene's trying to recapture something that can't be recaptured and that, of course, relates to Kim. We felt it was very important that if Kim broke up with Jimmy, that we wouldn't see her for a while because we wanted that break-up to be real and we didn't want to take her away from Jimmy and then kind of sideways bring her back. And it's also the simple element of showmanship. Sometimes you want a show to give you exactly what you want to see and sometimes you want to delay it, and this gave Kim, I think, a great entrance again in Episode 12, not to see her in Episode 10 and 11. 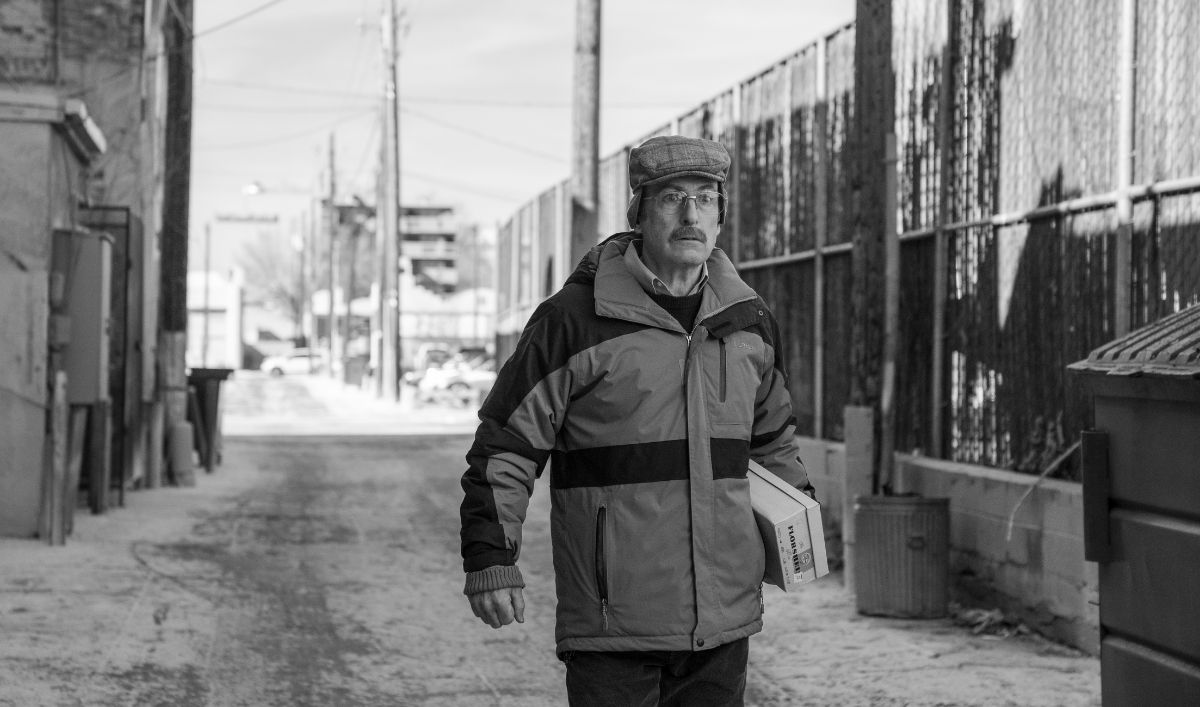 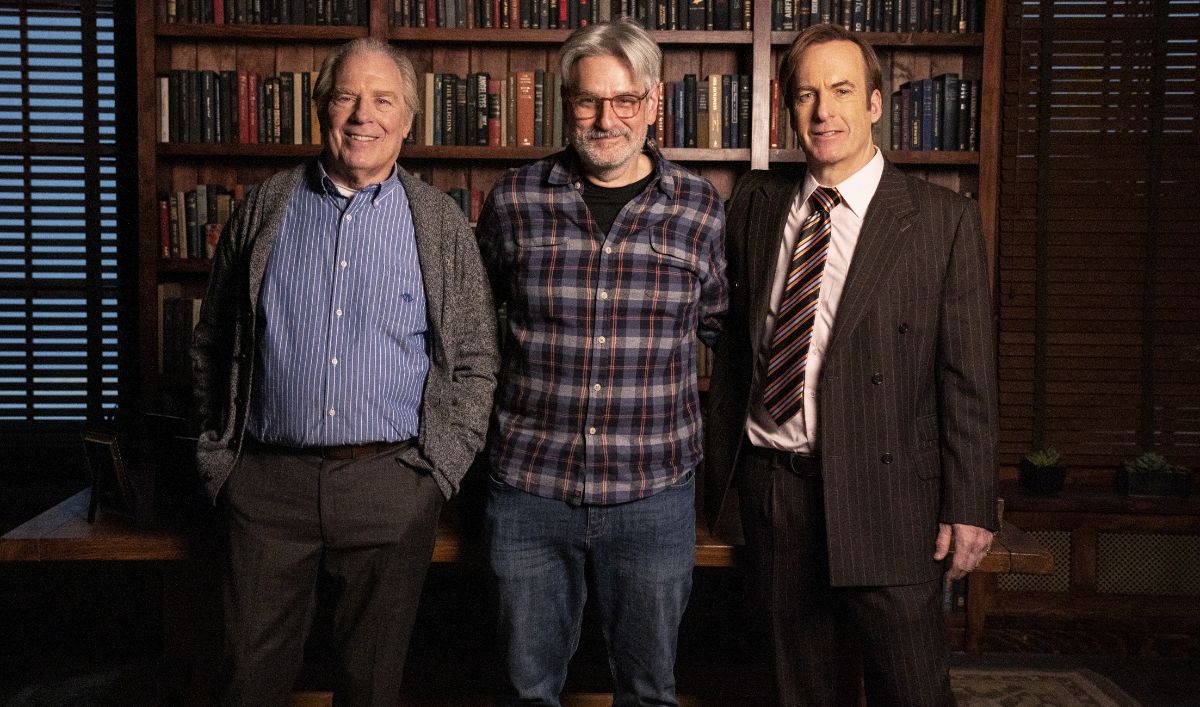 Gould, pictured with Michael McKean and Bob Odenkirk on the set of the series finale.

The Chuck moment, in particular, was a bittersweet reminder that these two brothers just couldn’t quite figure each other out.
Gould, pictured between Michael McKean and Bob Odenkirk on the set of the series finale When any of us who've lost somebody who has been important in our lives, you can't help but start thinking about the things that you wished you'd said and the opportunities that went by that you didn't take. This is an example of that. In that moment, Chuck is thinking about Jimmy in a different way because he's out of his head enough to realize that his younger brother is going tremendously out of his way to take care of him. His younger brother isn't arguing with him about the reality of his illness. His younger brother is just trying to keep Chuck alive and comfortable. Chuck sees that, but Jimmy's too busy. He doesn't quite see that his brother's in a different space in that moment, and the moment passes. And that's tragic I think. This story of Jimmy and Chuck is tragic. It's a story of two guys who just never quite connected and certainly Chuck's ego and his wounded pride I think plays a really big role in that and in his own death.
I'd be remiss to not to talk about Gus Fring who’s been such an important character across both this show and Breaking Bad. How did you guys decide that the moment with Gus a few episodes back would be the final grace note for the character?
The last time we saw Gus Fring was in a fancy restaurant drinking wine, but he's a guy who's letting an opportunity go by. You can see he's got this spontaneous connection with this sommelier. They make a great pair and yet Gus won't let himself be that vulnerable. Gus has prioritized revenge in his life and, once you've made revenge Job No. 1, everything else falls away. In an odd way, in that episode, Episode 9, that runs in parallel to Mike. Mike says to Nacho's father, "You're going to have justice," and his father rightly says, "You're not talking about justice. You're talking about revenge." But Gus Fring's story hopefully isn't just one of brilliant maneuvers and insights and manipulation. It's also about the waste of human potential because he's got so much more to offer the world, or he would have if he had taken a different path, and here he is making revenge his priority and leaving all human contact behind.
When Breaking Bad ended, Vince Gilligan spoke a lot about doing an anti-Sopranos ending and tying up all the loose ends of that story. This ending has a slightly more ambiguous feeling. What does that final moment mean to you?
We felt strongly that this show needed to end differently from Breaking Bad and also from El Camino. We have our three heroes. Walt kind of gets what he wants. He dies but he was always going to die. Jesse suffers greatly but he gets freedom. And Saul/Jimmy chooses to go to jail for a lot longer than he would have otherwise because he wants to live an honest life. So, they're all three really different animals. Hopefully it's not too terribly ambiguous. To me, Kim is shaken up and she's upset by seeing this person who she's loved – and maybe she still loves him. I think she probably does. But they're not in a relationship and they probably never will be again. She's upset by seeing him in prison, but his spirit is still there and he is Jimmy McGill. In a perfect world, these characters are both alive and you kind of keep writing the story in your head a little bit and keep thinking about the things that could happen and the potential. My perfect world is that one where the characters live in the hearts of the audience beyond the end of the show and that's what we're reaching for. 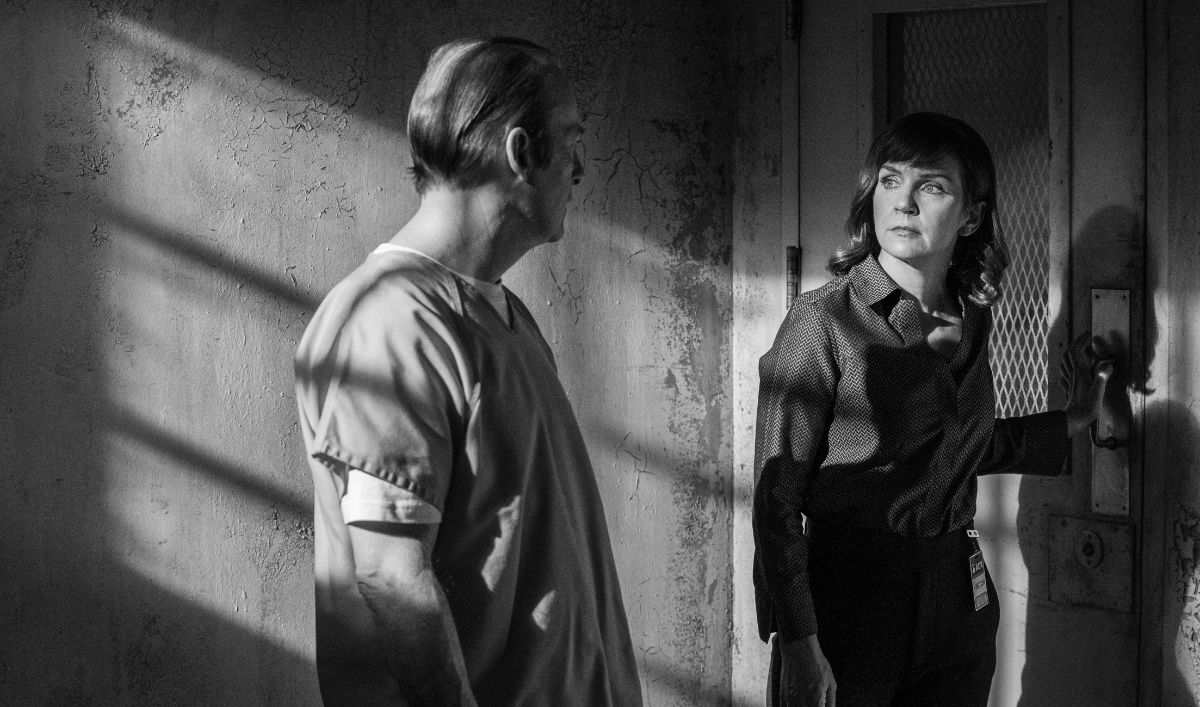 You wrote the first Saul Goodman appearance on Breaking Bad and have lived and thought about this guy for so long. How would you sum up the entirety of this experience and what it’s meant to you? And do you think you’d ever revisit this world and its characters down the line?
Jimmy/Saul, he's in my heart. He and Kim are in my heart. They're people I care about almost as if they were real people, and I share that with the other folks who worked on the show. It's been the creative experience of a lifetime. It's been more than I could have ever dared to hope for. I think if you've watched this show, you can't look at Breaking Bad the same way. For one thing, you know what's going on under the floor of that superlab! But I think there's the other sense, which is that when you're seeing this guy Saul Goodman, when he insinuates himself into Walter White's life, you're not just looking at him from Walt's point of view. Now you're looking at Walt from Saul's point of view. I think on both their behalfs, you're saying, "No! Please stop!" I think this show does throw Breaking Bad in a different light and certainly it's a complex story. But in some ways it's very simple and I think that's the power of it. And, boy, I'm going to be thinking about Walt and Jesse and Saul and Kim and Mike and Gus and Nacho. Those are people I'm going to carry with me for the rest of my life.
And as for if there's more to the story, there might be. I don't want to speak for Vince, but I think we both would like to take a little break from this universe to explore something else. But if we come back, it will be because we've got something that we're excited about and that there's more to say. I'm not going to say that couldn't happen. It certainly could. I feel like I need to give it a little rest. Certainly never say never. And I think if you watch this episode, Kim Wexler seems like she's got more to do, that's for sure.
For more on Better Call Saul’s series finale, read our Q&A with Rhea Seehorn. And for more on the entire final season, read all our cast and creator Q&As here.

Tales of the Walking Dead Q&A — Jessie T. Usher’s Davon Is Ready For His Next Adventure