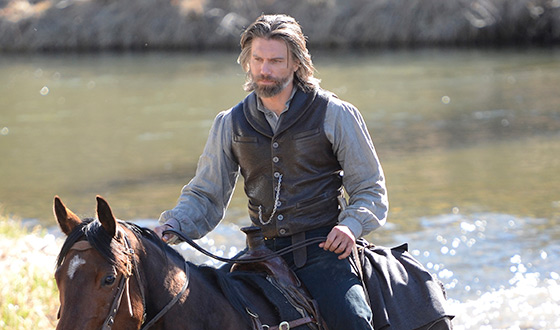 AMC’s original Western drama Hell on Wheels, will return for an expanded fourth season of 13 episodes on Saturday, August 2 at 9pm ET/PT. The new season of the series, which stars Anson Mount, Colm Meaney and Common, will air in two parts with the first 10 episodes running consecutively through Saturday, October 4, before taking a hiatus during the network's annual FearFest programming and returning for the final three episodes beginning on Saturday, November 8.

Hell on Wheels shifted to the Saturday night slot last year to partner with the network’s already successful Western programming on Saturdays, and delivered an average audience of 3.3 million viewers, live plus 3. Additionally, the series nearly doubled (+97%) the network’s Saturday prime average and was +152% higher than the total day average. For season four, the network will once again package the series with favorite Western titles, including the films The Horse Whisperer, Tombstone, and Jeremiah Johnson, and the network premiere of the mini-series Comanche Moon.

"We're thrilled to bring Hell on Wheels back for another season. Its success on Saturday night reflects the strength and broad appeal of the show, and we're incredibly excited to share the continuation of this story with the millions of loyal Hell on Wheels fans," said Joel Stillerman, AMC’s executive vice president of original programming, production and digital.

Season 3 of Hell On Wheels ended with Cullen Bohannon (Anson Mount) married to a pregnant Naomi and living in the Mormon fort where The Swede (Christopher Heyerdahl) was impersonating church leader Bishop Dutson; Thomas “Doc” Durant (Colm Meaney) back in control of the Union Pacific Railroad which had successfully expanded westward to Cheyenne; and Elam (Common), gravely injured by a bear while searching for the missing Cullen. As Season 4 unfolds, civilization makes its way west with the railroad, bringing with it men who attempt to do with their pens what rougher men did in seasons past with their guns. Conflict between government and big business, ranchers, homesteaders and the railroad will continue to define the drama as all of those interests compete with one another for control of Cheyenne, Wyoming, the “Magic City of the Plains” and the most important railroad hub in the country. The season will also introduce several new characters including John Campbell (Jake Weber, Medium, The Following).

“We’re excited about the stories we’re telling in season four,” said series executive producer and showrunner, John Wirth. “The consequences of the stories we told last year will continue to reverberate throughout the season, and fans can expect to see some shocking events that will not only change the lives of our characters, but the landscape of the series as the railroad continues its relentless march westward.”