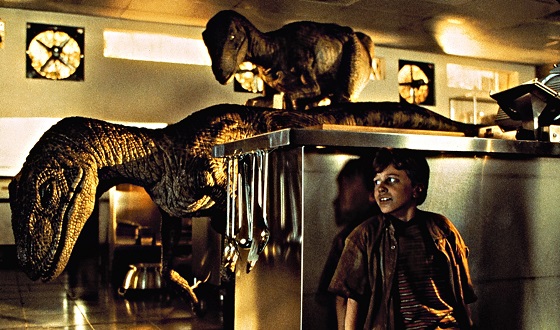 As we sit down for Thanksgiving dinner to share what we’re grateful for, movie lovers everywhere should give a thanks to Jurassic Park and Steven Spielberg for revolutionizing not only computer animated graphics, but the film industry itself. And also for the dinosaurs, because who doesn’t love dinosaurs? If you’re already a long-time fan, you probably know Universal bought the story from Michael Crichton before the author had even finished writing the novel. You’re also probably well aware that the terrifying roar of the T-Rex is actually made up of penguin-mating sounds, as well as dog, tiger, alligator and elephant noises mixed together. But there might be some details about the landmark film you may not have heard. Here are six lesser known facts about Jurassic Park…

1. The T-Rex animatron caused screams in real life too

The twelve-ton T-Rex animatronic puppet terrified audiences onscreen, but it also scared crew members during filming. The animatronic occasionally malfunctioned when wet, and the film’s producer, Kathleen Kennedy, recalls that, “The T-Rex went into the heebie-jeebies sometimes. Scared the crap out of us. We’d be, like, eating lunch, and all of a sudden a T-rex would come alive. At first we didn’t know what was happening, and then we realized it was the rain. You’d hear people start screaming.”

2. Jurassic Park‘s tagline began as an inside joke

The tagline for Jurassic Park, “An Adventure 65 Million Years in the Making” was originally a joke director Steven Spielberg made on set about the fact that the mosquito trapped in amber was genuinely millions of years old before it was even discovered.

In the book, Ian Malcolm (Jeff Goldblum) tells Ellie Sattler (Laura Dern) that he only wears black and gray so he doesn’t have to think about what to wear everyday, but the filmmakers chose his wardrobe very intentionally. His black and gray clothes reflect his skepticism about genetic engineering, while Dr. Hammond (Richard Attenborough) wears all white to reflect his diametric idealism. Michael Crichton, the book’s author, has said his views about science are embodied in Dr. Malcolm, while director Steven Spielberg sees parallels between himself and Dr. Hammond.

Spielberg wanted the velociraptors to be about 10 feet tall, much larger than they would have been in reality, so they would appear more menacing onscreen. Just before the release of film, the Utahraptor was discovered, which was a similar height to the raptors in the film. Special effects supervisor Stan Winston joked, “We made it, then they discovered it.”

5. In one scene, the velociraptors were crew members in rubber suits

For all of its groundbreaking computer animated and animatronic puppet effects, some of the scenes were created the good ol’ fashion way: with people in costumes. During the climactic kitchen scene, some of the velociraptors were created by animators wearing rubber dinosaur suits.

6. A rivalry battle between puppet- and computer-effects inspired a line in the film

When visual effects supervisor Dennis Muren showed Steven Spielberg the screen tests of the computer animated dinosaurs, Spielberg was blown away by the rendering. He turned to animatronic supervisor, Phil Tippett, who looked at the computer visuals and said, “I think we’re extinct.” Spielberg liked the line and had Dr. Malcolm say it to Dr. Grant.