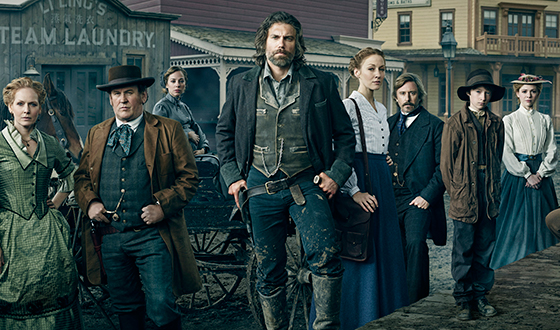 AMC has announced that Hell on Wheels will be returning for a fifth and final season of 14 episodes. Seven new episodes will air next summer, with the final seven episodes of the series following in the summer of 2016. The Western period drama opened up a new night of original programming for AMC on Saturday, and in its current season, is delivering an average of 3.4 million viewers on the most challenging night of the week for television.

“With Season 5 of Hell on Wheels, we are proud to bring our transcontinental journey to conclusion for the large, loyal audience that has traveled with Cullen Bohannon and his crew for so many years,” said AMC President Charlie Collier. “We look forward to appropriately honoring Hell on Wheels in this final season. Enormous thanks to the terrific writers, cast and crew for all they have achieved and for all that lies ahead in the Wild West.”

In its fourth season, Hell on Wheels has become a top-20 ad-supported cable drama, and the show’s social media community has seen significant growth in terms of reach and engagement when compared to Season 3: Facebook engagement and reach approximately doubled, and weekly Twitter engagements and impressions saw a 40% spike due to weekly live chats with the cast and crew. This season, for the first time, Hell on Wheels appeared in multiple weeks on the list of top 20 Xfinity On Demand shows, as measured by Comcast. The final three episodes of Season 4 kick off on Saturday, November 8 at 9/8c.

Starring Anson Mount and Colm Meaney, Hell on Wheels was developed by Endemol USA. The series is produced by leading independent studio Entertainment One (eOne) and Nomadic Pictures.