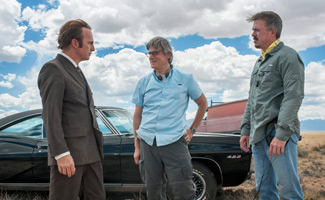 This week, Peter Gould told the NY Daily News that Better Call Saul has a flexible timeline that could feature Walter White, while Vulture reports that Vince Gilligan is joining the executive team as co-showrunner. Plus, The Sacramento Bee is “more than ready” for more Bob Odenkirk. Read on for more:

• Co-Showrunner Peter Gould spoke with the NY Daily News to say that Better Call Saul will have a flexible timeline that could take place before, during and after the events of Breaking Bad and that being able to work with two seasons “gives us a much bigger canvas to play with.” It also means a potential return of Walter White and Jesse Pinkman. Business Insider, The Celebrity Cafe, Cinema Blend, The Huffington Post and WhoSay also report on the interview.

• The Sacramento Bee laments that Better Call Saul is being pushed back to 2015, but is “more than ready to watch a show that’s all about [Bob Odenkirk].”

• Screen Rant highlights one of the ways Better Call Saul will be different from its predecessor: it’s tone, saying that if Breaking Bad was “75% drama and 25% comedy, Saul will be the reverse – 75% comedy, 25% drama.”

• Down with Tyranny says many of Breaking Bad’s original writing and producing team are reassembling to helm Better Call Saul.

To stay up-to-date with all the latest Better Call Saul news, sign up for the The AMC Weekly.