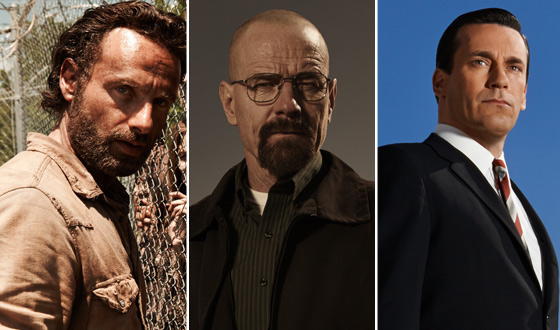 The tallies for nominations by show are:

“It’s wonderfully gratifying to see programming about which we, at AMC, are so passionate — Breaking Bad, Mad Men and The Walking Dead – recognized by Academy Members, especially in such an enormously competitive environment,” said Charlie Collier, President of AMC. “That Breaking Bad and Mad Men are two of the six nominees in the Outstanding Drama category- Breaking Bad with an opportunity to defend last year’s win, for its historic final eight episodes, and Mad Men nominated for the seventh year in a row having won four times in the past; we’re humbled and appreciative. We are also so appreciative and proud of the individual nominations for the actors, writers, directors and creative professionals who have made these unforgettable shows so unique. We are thankful Academy members have honored these series with these nominations.”

For a complete list of AMC’s Emmy nominations, check out the Television Academy’s press release here.

The 66th Annual Primetime Emmy Awards will be broadcast live Monday, August 25 at 8/7c on NBC.