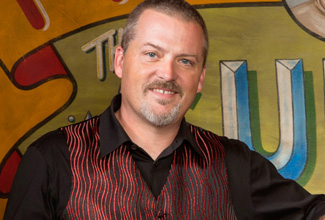 Todd Ray, the owner of the Venice Beach Freakshow, reveals how he “seeks the wonders of the universe” and what fans can look forward to in the upcoming season of Freakshow.

Q: Everyone looks to you for encouragement and guidance at the Freakshow. Who was your support system growing up?

A: When I was growing up, my mother was a big supporter of mine. She was always artistic and creative. We used to do this thing where I would be in my bedroom, and she would be in her bedroom and even though there was just a wall between us we would talk — I would tell her about any strange ideas I was thinking at the time. She would sit up with me and talk about the Universe or outer space — I just always thought the world was so amazing.

Q: What does the Freakshow’s slogan “Say No to Normal” mean to you?

A: It was born out of a realization I had when I was younger. I thought, Who came up with the idea of normal? What’s normal today will not be normal 50 years from now — its a moving target, an illusion. “Say No to Normal” is about changing people’s minds and identifying the fact that there’s nothing normal — we’re all living miracles and wonders. The Freakshow and its family are an expression of individuality that defies the idea of normal and a lot of the struggles that we go into this season are based on other people judging them against normal. We shouldn’t identify this amazing world as normal when it’s so incredible and I think that’s what the show is ultimately trying to give people. It’s meant to remind you that you should wake up, that you should be free, and that you should open your eyes and appreciate the wonders of the world.

Q: Did you ever come across a human oddity or stunt that was too freaky even for you?

A: Nothing has ever done that for me. I don’t know that that’s possible. I’ve come across some amazing acts but knew that they weren’t going to work in the Freakshow. A lot of people come to the show with their families and some things just could not be done in front of children.

Q: Family is very important to you. Did you ever have any apprehensions about raising your children in the Venice Beach Freakshow spotlight or allowing them to do any stunts?

A: Yes. The Venice Beach Freakshow is obviously my whole life, and through that, it  has become my family’s life. When my daughter Asia first decided that she wanted to do stunts I encouraged her and taught her how to lay on a bed of nails. In the beginning, the danger was limited… But once she got excited about being a performer, it was definitely nerve-wracking. There’s no way to feel comfortable about your daughter sticking a coat hanger down her throat. For my son Phoenix, the only thing that ever concerned me was when all the other kids were playing on the weekends, he had to work with us. For Asia it was the danger and for my son, I didn’t want him to feel like he was missing out.

Q: Do you have any hobbies that don’t include sideshow?

A: It sounds corny, but I seek the wonders of the universe every second of my life. When I lay down, my mind expands as far as I can send it out into the Universe. I think, and I visualize, and I philosophize. And that’s my hobby. I have thousands and thousands of books about every strange and almost un-thought thing. Some of it’s just free thinking, some of it’s research.

Q: What’s your ultimate dream for the Freakshow?

A:  In the short term, I want to keep expanding and growing the Venice Beach location. But, we are certainly going to take the show on the road. I want us to continue to grow so people can experience what we do and view the collection of oddities that I’ve found. I want to bring this wondrous entertainment to the masses wherever we can.

Q: What can we expect from this season of Freakshow?

A: You can expect an expansion of wonder. There are hard times, and there beautiful times. We’re expanding and bringing the Freakshow to more people, but the process is tough and stressful. There are a lot of things that happen that we really had to pull through together as a family — as a whole Freakshow. We’re growing, but there’s been a lot of struggles that we had to pull through.