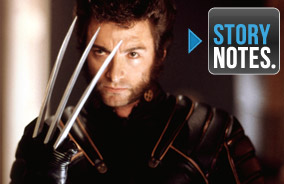 Weeknights during prime time on AMC, you can catch Story Notes — real time trivia and facts about your favorite movies! Below is the online version of the Story Notes for X-Men.

Anthology Notes
X-Men (2000) is the first of the blockbuster movies based on Marvel’s hit comic book series.

The 2011 movie X-Men: First Class tells the story of how Xavier and Magneto met.

In 2003, Bryan Singer directed the sequel, X2, but then left the franchise to work on Superman Returns. After a decade away, Singer returned to direct the seventh installment, X-Men: Days of Future Past (2014).

Backstory Notes
Storm has an accent because she’s descended from an ancient line of African priestesses.

Cyclops was an orphan before he became the very first mutant enlisted by Xavier. Xavier helped him control his power, and in return Cyclops became the leader of the X-Men.

Patrick Stewart (Professor Xavier) has done a lot of sci-fi and fantasy, from Dune to Star Trek: The Next Generation. Stewart: “It’s simply the way [my] career has fallen out… I have done my time in front of the green screen.”

Ray Park (Toad) specializes in Chinese martial arts and gymnastics. He can do a full flip from a standstill.

Rebecca Romijn (Mystique) started out as a model. She was on the cover of the Sports Illustrated swimsuit issue in 1999.

Casting Notes
Anna Paquin (Rogue) stars in the series True Blood. At age 11, she won an Oscar for her first movie, The Piano (1993).

Bruce Davison was nominated for an Oscar in 1990 for Longtime Companion.

At first, Patrick Stewart hadn’t heard of X-Men. He thought it was related to The X-Files. The studio shipped him a crate of comics. Stewart called it “the most fun research I’ve ever had to do.”

Ian McKellen was cast early on. In the ’70s, he and Stewart acted together in the Royal Shakespeare Co. Stewart said he used their relationship: “There was a connection made between us… history and trust.”

The truck driver is George Buza, the voice of Beast in the ’90s X-Men cartoon.

Hugh Jackman was relatively unknown before this. He mainly did musical theater in his native Australia. Two months into filming, he replaced Dougray Scott, who had to drop out to finish Mission: Impossible 2.

Wolverine’s attacker is former wrestler Tyler “Nitro” Mane. He was originally just hired to do stunts. When director Bryan Singer saw him, he cast him on the spot as Wolverine’s arch-nemesis, Sabretooth.

This was Halle Berry’s first action movie, a year before she won the Oscar for Monster’s Ball.

James Marsden (Superman Returns) got the part of Cyclops because he’s so expressive – even without his eyes.

The hot dog vendor in the blue shirt is X-Men co-creator Stan Lee.

Shawn Ashmore was a Canadian TV actor when he was cast in X-Men. This was his first big role.

Finance Note
X-Men made $300 million worldwide and launched the fourth-highest grossing movie franchise ever. It includes the sequels, prequels, and the Wolverine movies.

All of the scenes on Liberty Island were actually filmed in Canada, at a park on Lake Ontario.

The exterior of “Mutant High” is the Parkwood Estate, which was also used as the mansion in Billy Madison.

Music Note
X-Men‘s score is by Michael Kamen. He worked on the Lethal Weapon and Die Hard movies.

Wolverine made Empire’s “100 Greatest Movie Characters” for being “the best at what he does… growling one-liners, slicing and dicing… [and being] more handsome than his comic book counterpart.”

Press Note
The New Yorker: “[It’s] the most beautiful, strange, and exciting comic book movie since the original Batman.”

Production Notes
When X-Men was made, comic book movies tended to be broad and cartoonish, like Batman & Robin (1997). The studio wanted a new, grittier approach to the superhero genre.

Director Bryan Singer was hired based on his work on The Usual Suspects (1995). Singer turned the job down twice. Then he actually read the X-Men comics and changed his mind.

Director Bryan Singer watched all 76 episodes of the ’90s cartoon show to prepare for directing X-Men. It helped him decide which of the characters from the comics should be in the movie.

Because he was cast two months into filming, Hugh Jackman had to scramble to get in shape.

To prepare for the movie, director Bryan Singer visited the sets of Titanic and Star Wars: Episode I. He asked directors James Cameron and George Lucas for advice on making effects-heavy movies.

To prepare for the movie, director Bryan Singer took a private tour of Ellis Island and the Statue of Liberty.

Dir. Bryan Singer read gossip sites during filming to see what rumors were circulating about the movie. One day he read that he had been fired. He called the executives in a panic – but it wasn’t true.

X-Men‘s world premiere was held on Ellis Island just a week after the 4th of July, 2000.

Prop Notes
Cyclops’s visor and glasses were made by Oakley. They gave Marsden a lifetime supply of sunglasses.

The X-Men’s jet is a modified version of a SR-71 Blackbird – the world’s fastest jet.

Quotation Notes
Singer: “X-Men does not take place in a fantastical universe. It takes place in a world much like our own.”

Jackman said Wolverine is hard for an actor to play because there’s so much pressure from the fans. Jackman: “Wolverine is a hero to many people… I’ve heard of people with tattoos of [him].”

McKellen: “I think I [am] a mutant. Being a gay man, I’m often thought to be dangerous and… abnormal… “Therein lies my interest in mutants… it’s other minorities too: religious minorities, racial minorities.”

Bruce Davison compared this movie to his breakout role in the horror movie Willard (1971). Davison: “I haven’t had this much fun since I was eaten by rats!”

Dir. Bryan Singer said X-Men fans take the comics “so seriously that for me not to would be a kind of crime.”

Hugh Jackman said if he could have any of the mutants’ abilities, he would choose Mystique’s.

Rebecca Romijn: “I was hired to be the poser… [they] ended up really loving the image and… added a couple fight scenes.”

In 2013, Hugh Jackman said Wolverine was his favorite role: “He’s eternally fascinating to me… He’s incredibly human and a great sort of anti-hero and tragic figure.”

Script Notes
Director Bryan Singer also co-wrote the story. He chose this opening to ground the movie in reality.

The script originally started with more characters’ backstories, but they wanted to get the plot moving.

Director Bryan Singer said that it was hard to get the plot started with so many superheroes. Singer: “To keep the story going… you have to quickly establish all of their powers.”

Jean Grey is one of the original X-Men, but she was never a doctor. They added that for the movie. Famke Janssen called this version of Jean Grey more “conservative, classic, [and] elegant.”

The love triangle between Jean, Wolverine, and Cyclops went through lots of changes during filming. Famke Janssen didn’t know which relationship would be stronger until she saw the movie.

Set Notes
The exterior of a distillery in Toronto was used as the concentration camp at the beginning of the movie.

Singer banned comics on set, not wanting them to influence the cast. They secretly read them anyway.

Magneto’s fortress is a life-size set that took two months to build from scratch.

They repeatedly used the same kids as extras to make the school feel more like a real place.

Tyler Mane once left his black contacts in too long and went blind for a day. It was extremely painful.

To get the charge in his hair, Tyler Mane was attached to a five-million volt electrostatic generator.

The replica of Lady Liberty’s head is 1.5 times the size of the real thing.

Singer said Ian McKellen was great at flying in the harness, especially landing, which is hard to do.

Jackman did most of his own stunts. One day, he almost impaled a cameraman with his claws.

Rebecca Romijn spent over eight hours a day having more than 75 prosthetics applied and being painted blue.

Neither Ian McKellen nor Patrick Stewart knew how to play chess. A chess master came in to teach them. Xavier (Stewart) uses a “pawn assault,” winning with the weakest pieces. It’s only fair, since he reads minds.

Source Notes
Legendary comic book writer Stan Lee created X-Men in 1963 as a comment on racism and bigotry. He said his first reaction to the X-Men movie getting made was, “What took so long?”

In this world, mutant evolution occurs through the “X-gene.” In the comics, there are 270 mutant heroes on different “teams” that make up the X-Men.

Wolverine first appeared in 1974 as part of Marvel’s Incredible Hulk comics. He joined X-Men in 1975.

Wolverine was born in Alberta. One of his nicknames is Canucklehead, as in Canuck – slang for Canadian.

Rogue started out as a villain in the comics in 1981, but she permanently joined the good guys soon after.

Magneto has been the X-Men’s arch-nemesis since the comic’s first issue in 1963. His real name is Max Eisenhardt, but after surviving the Nazis he changed his name to Erik Lehnsherr.

Xavier is also known as “Professor X.” In the comics, he says “X-Men” was never meant to be a self-tribute. Comic co-creator Stan Lee said he called them X-Men “because they have eXtra power.”

Iceman (real name: Bobby), was one of Charles Xavier’s original X-Men from the first comic in 1963. The others were Cyclops, Jean Grey, and two characters not in this movie: Beast and Angel.

At one point in the comics, Cerebro becomes self aware and turns into a “living” character.

In the comics, Rogue eventually finds love with fellow X-Man Gambit, even though they cannot touch.

The white streak in her hair is part of Rogue’s signature look from the comics.

X-Men led to a redesign of the comics, which had been struggling before the movie. The new comic was called Ultimate X-Men (2001) and was an entire reboot of the storyline.

Tech Notes
Magneto’s machine is a combination of a full-size version, a miniature replica, and computer effects.

Mystique’s morph-effects are made up of 8,000 scales animating in different directions.

The actors’ leather costumes were so stiff that for several takes nobody could get over a two-foot wall in one scene. James Marsden: “You couldn’t feel less like a superhero in these costumes.”