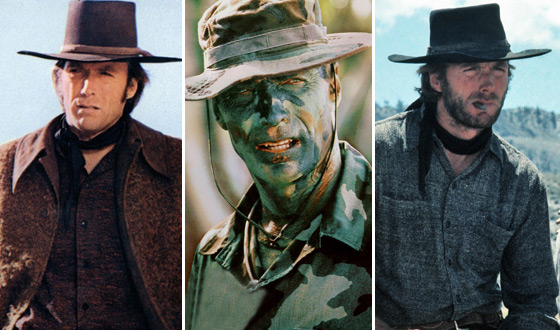 Quick: Someone says, “Clint Eastwood,” you think… Dirty Harry? The Man with No Name? Oscar-winning director? Hollywood star turned small-town mayor? Regardless, you think something. Many things, in fact. Because Clint has created one of the most indelible impressions in movie history. No wonder he’s a constant source of inspiration. Consider the following pop cultural references…

10. Back to the Future
Clint Eastwood gets repeated references in this series. First, when future bully Biff (Thomas F. Wilson) watches the Man with No Name reveal his bulletproof vest in A Fistful of Dollars, then again when Marty McFly (Michael J. Fox) introduces himself as “Clint Eastwood” to an older version of Biff. Who wouldn’t want to be Clint Eastwood? For example…

9. Supernatural
In the episode “Frontierland,” Sam accuses Dean of being obsessed with old movies. “You can recite every Clint Eastwood movie ever made, line for line.” Later, Dean turns the tables and introduces himself as “Marshal Eastwood. Clint Eastwood,” as the theme from The Good, the Bad and the Ugly plays.

8. Neuromancer
William Gibson’s seminal scifi novel features a mirror-eyed cyborg bodyguard named Molly, who is described as such a bad-ass hero that you can trace “the whole lineage back to [Bruce] Lee and Eastwood.”

7. Heroes of Newerth
This mulitplayer online battle arena game features a gnarly green character named Flint Beastwood, who carries mean-looking firearms and shows no mercy when it comes to meting out punishment.

6. Beverly Hills Cop II
When Billy Rosewood (Judge Reinhold) pulls out an extra-long gun, his partner Alex Foley (Eddie Murphy) questions his choice in weaponry. “What’s that for?” before adding, “Who do you think you are? Clint Eastwood?”

5. Community
This comedy goldmine has cited everything from Pulp Fiction to Jon Stewart to Dungeons & Dragons. Also memorably, the series had a two-part season finale with titles “A Fistful of Paintballs” and “For a Few Paintballs More” (sub the word “dollars” for “paintballs” and you’ve got titles to two Eastwood/Sergio Leone collaborations).

4. True Romance
Quentin Tarantino has repeatedly named The Good, the Bad and the Ugly as an influential movie, so naturally enough, the perpetual pop-culture-referencer mentions Eastwood in his thriller True Romance. Freaking out that he’s losing his cool, Clarence (Christian Slater) is reassured by the ghost of Elvis that “all anybody saw was Clint Eastwood drinkin’ coffee.”

3. The Mask
Jim Carrey’s absurd green-faced alter ego quotes one of the most famous lines from Eastwood’s Dirty Harry as he faces down a trio of gun-toting baddies: “Now you have to ask yourself one question: Do I feel lucky? Well, do ya, punks?” But then, you could build a long list of references to that line alone!

2. Gorillaz
The very first single released from the debut album of this supremely hip British virtual-cartoon-character-populated-trip-hop band is “Clint Eastwood,” which includes an aural reference to the theme music from The Good, the Bad and the Ugly. The band’s second album followed that up with the single “Dirty Harry.”

1. Rango
As the nervy title-character chameleon (Johnny Depp) stumbles in the desert, he encounters a golf cart carrying a handful of “golden guardians” that look like Oscars and the Spirit of the West, who resembles the Man with No Name, voiced by Eastwood sound-alike Timothy Olyphant. Consider this a reference to a reference or your tribute to a tribute.

Check out all of the Clint Eastwood movies now on AMC.