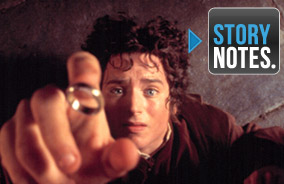 Weeknights during prime time on AMC, you can catch Story Notes — real time trivia and facts about your favorite movies! Below is the online version of the Story Notes for The Lord of the Rings: The Two Towers.

Anthology Notes
The Lord of the Rings: The Two Towers (2002) is the second film in Peter Jackson’s ground-breaking trilogy. Jackson shot all three films at once, working for seven years to bring J.R.R. Tolkien’s fantasy epic to the big screen. Released just a year after The Fellowship of the Ring, Towers picks up right where Fellowship ends.

The flashback of wizard Gandalf the Grey fighting the Balrog beneath the Mines of Moria is mostly identical to how it appeared in the first movie.

Gollum is only seen briefly tracking the Fellowship in the first movie.

The Black Riders (or Nazgûl) are servants of Sauron whose Rings of Power have turned them into wraiths. When Frodo wears the Ring he can see their true appearance. And eventually, he may become one. Frodo is almost killed by a Nazgûl in The Fellowship of the Ring.

The Lady Galadriel resisted the power of the Ring when Frodo presented it to her.

Boromir dies trying to save Merry and Pippin from the Uruk-hai. The Fellowship had already split up.

In Fellowship, Gimli is adamant that “nobody tosses a dwarf.”

Backstory Notes
Quick summary: Frodo Baggins, a hobbit, is tasked with keeping the One Ring from evil Lord Sauron. He’s on his way to Mordor, where he plans to destroy it in the fires of Mt. Doom, where it was forged.

Isengard is the stronghold of Saruman the White Wizard. He came to Middle-earth to get rid of Sauron but was corrupted by his dark power.

Éowyn’s parents were killed by Orcs and she’s been raised with her brother by her uncle, King Théoden.

Aragorn is a Dùnedain Ranger. He is considered one of the best trackers in Middle-earth.

Théoden’s sword is called Herugrim. In the book, Wormtongue kept it locked in a chest.

Aragorn’s true love, Arwen, is an Elf. She’s the daughter of Elrond, Lord of Rivendell.

Aragorn speaks Elvish because he was raised in Rivendell.

Gollum was once a Ring-bearer. 500 years with the Ring has destroyed his body and mind.

Sting is an Elvish short sword given to Frodo by his cousin Bilbo, who meets up with Gollum in The Hobbit.

Elijah Wood said he “grew into being a man” making the trilogy. He was just 18 when shooting began.

Karl Urban is a New Zealand native, born in Wellington, where the movie was headquartered.

Peter Jackson first read The Lord of the Rings when he was 18.

Casting Notes
Elijah Wood shot his own audition tape (with home-made hobbit costume) in his backyard.

Sean Astin was unfamiliar with the Rings trilogy when he got the casting call. He bought the books immediately.

Viggo Mortensen joined the trilogy after they’d done months of prep with another actor as Aragorn.

Orlando Bloom (Legolas) made his major movie debut in the first movie, The Fellowship of the Ring.

John Rhys-Davies (Gimli) is no stranger to action franchises. He’s also in the Indiana Jones movies.

Christopher Lee reads all of Tolkien’s books once a year. He was considered an expert on the set.

Brad Dourif (Gríma Wormtongue) got an Oscar nod for his first movie, One Flew Over the Cuckoo’s Nest (1975).

John Rhys-Davies does double duty as Gimli and Treebeard’s voice.

Bernard Hill was originally considered for Gandalf. Jackson wanted to work with him, so he cast him as Théoden.

Co-writer/producer Fran Walsh had Miranda Otto (Éowyn) in mind early on. Once they saw her tape, they cast her.

Hugo Weaving (Elrond) was also working on the Matrix sequels around the same time. They came out in 2003.

David Wenham (Faramir) was chosen partly for his resemblance to Sean Bean (Boromir in Fellowship).

Crew Notes
The fight sequences were designed by swordmaster Bob Anderson. He plays Darth Vader in the lightsaber battles in The Empire Strikes Back and The Return of the Jedi.

Health Notes
Viggo Mortensen broke his toe when he kicked a helmet at the scene of the Uruk-hai. They kept his scream of pain in the movie.

Bernard Hill (Théoden) got six stitches after getting hit in the ear with a sword.

Location Note
The movie was shot in Peter Jackson’s home of New Zealand.

Music Notes
Howard Shore composed the score for all three movies. He won the Oscar for the other two.

The music was recorded and mixed in London, the only part of the production not done in New Zealand. They set up video conferencing so Jackson could be in the session from his edit room in New Zealand.

Production Notes
Peter Jackson originally pitched a Hobbit movie, but the rights weren’t available, so he went straight into Rings.

Jackson wanted the film to look like a John Ford Western: “a massive landscape” with people like “little dots.”

To “cast” the Rohan horses, they held “auditions” all across New Zealand. 70 saddles were hand-made for the movie, each embossed and carved with Middle-earth history.

To make the trees “speak,” they used the mooing of a cow, pitched down really low.

When Serkis saw Gollum for the first time, he said he looked like his Dad and newborn baby mixed together.

Serkis said that Gollum’s voice is based on his cats: “They get these fur balls in their throat after they lick.”

Peter Jackson wanted the wargs to look like a cross between a pit-bull and a hyena.

Throughout the movies, they used a variety of techniques for Hobbit scale; forced perspective, blue screen, oversized costumes, and body doubles.

Ironically, the Ents’ footsteps are recordings of real trees falling.

They added the throb of the Ring to the sound of the fell beast wings. The Ring knows it’s closer to home.

Every weapon in the movie is hand-made from materials really used in medieval times.

The One Ring was made by Jens Hansen, a jewelry designer from Nelson, New Zealand.

Elijah Wood: “Gollum… is one of my all-time favorite characters in literature.”

After spitting while shooting a scene, Serkis joked that he made it into the film after all: “Yes, I am on screen, that’s my saliva.”

Peter Jackson said that compared to Fellowship, this is “much grittier and more earthy, like Braveheart.”

Swordmaster Bob Anderson said Viggo Mortensen was a better with a sword than Errol Flynn.

Director Peter Jackson: “Tolkien, he hated war and he hated the futility of war and the waste of war, yet Tolkien is also saying though that there are ultimately some things worth fighting for. ”

Serkis on Gollum: “It’s like seeing someone with a terminal disease that Frodo himself is in the early stages of.”

Set Notes
The trees on the Fangorn set were in sets of three on wheels. They were moved around for different angles.

On one take, Andy Serkis (Gollum) grabbed Sean Astin by the hair and pulled off his wig.

The look of Rohan is based on real archeological finds, like the Anglo-Saxon relics at Sutton Hoo in England.

All of the extras in Edoras were local farmers and their wives.

They set up a stable for the movie’s horses with an open-door policy for the actors to ride any time.

Most of the sets were carved out of polystyrene – it became wood, rock, and the obsidian of Orthanc.

At any given time, they had around 100 Uruk-hai extras on set. That meant 300 prosthetic suits – there were always Uruks waiting to be rotated in.

Source Notes
Tolkien wrote that Treebeard’s voice was “a deep voice like a very deep woodwind instrument.” It’s rumored he based it on that of his friend, author C.S. Lewis (The Chronicles of Narnia).

Tolkien described the approaching Orcs as “a great field of dark corn, tossed by a tempest of war.”

Ent is Rohan for “giant.” In their own language, Entish, they’re called Onodrim.

Though Tolkien wrote Rings while WWII was going on, he said the novel was not an allegory for the war.

Tolkien got his inspiration for the Ents from Macbeth. In it, as soldiers come out of the trees, it’s mistaken as the wood moving. Tolkien wanted to make it real.

The Lord of the Rings has sold over 150 million copies, making it one of the best-selling books of all time.

Tech Notes
Treebeard was a combination of computer animation and a 14-foot-tall puppet on set. The animation was so detailed (note the cracks in the bark in the movie), it could take 48 hours to render a single frame.

They developed a computer code called “Grove,” where they could essentially individualize each Ent.

The Dead Marshes set was right next to a railway station. They had to paint out the trains that went past.

Gollum has a full skeleton and a muscle system made up of over 300 different muscles.

They developed new artificial intelligence software called MASSIVE for the movie. Each of the 10,000 computer-animated Uruk-hai has a will of its own and reacts to its environment.

Wardrobe Notes
48,000 separate pieces of armor were made for the movie. They had a foundry going with full-time smiths.

Over 12 million links of chain mail were made for the trilogy. Each suit took around three days to make.

The actors weighed their armor. It weighed around 50 lbs.

The Elf armor was made to be very restrictive, forcing the actors to stand upright, poised, and elegant.

The wardrobe department made two sets of everything: one for the actors, one for their scale doubles.