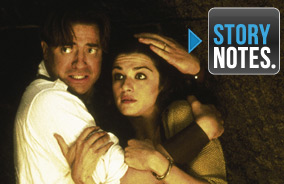 Weeknights during prime time on AMC, you can catch Story Notes — real time trivia and facts about your favorite movies! Below is the online version of the Story Notes for The Mummy Returns.

Rachel Weisz (Evy): “My character’s grown up a lot… She’s no longer a kind of earnest, timid, wide-eyed librarian.”

The day after The Mummy opened, the studio asked writer/director Stephen Sommers to make a sequel.

When they met in the first movie, Rick stole a kiss from Evy while he was in jail and about to be hanged. Evy didn’t even know his name, but she still bought his freedom.
Ardeth Bay is a Medjai warrior who helps Rick and Evy defeat the Mummy in the first movie.

The Medjai, once the Pharaoh’s bodyguards, are sworn to keep the Mummy in his tomb.

Imhotep kidnapped Evy in the first movie, too. He thought she was the reincarnation of Anck-su-namun.

Patricia Velasquez said the love story is the heart of the Mummy movies.

The Mummy’s face appears in a giant sandstorm in the first movie.

The adventure continues with The Mummy: Tomb of the Dragon Emperor (2008).

Automotive Note
For the vintage bus, they rounded up pieces from private collections all over Europe. The ads are real ones from the ’30s.

Backstory Notes
The pygmies have been in Ahm Shere for thousands of years. In Ancient Egypt, the pharaohs would bring them back to Thebes and use them as jesters.

Medjai warriors begin training at an early age at a desert compound. Their tattoos read, “Imhotep” and “truth.”

Biographical Notes
Before he started acting, Oded Fehr (Ardeth Bay) was a member of the Israeli navy.

Patricia Velasquez began her career as a model in the ’90s. She’s considered the first Latina supermodel.

In real life, Oded Fehr doesn’t have any face tattoos, but he does have a small ghost on his back.

Casting Notes
Pro wrestler Dwayne “The Rock” Johnson made his movie debut as the Scorpion King.

In between Mummy movies, Brendan Fraser stars alongside Elizabeth Hurley in Bedazzled (2000).

Freddie Boath (Alex) was a big fan of The Mummy. He saw it over 30 times. This was his first professional acting job.

Bruce Byron is a familiar face on British TV. He’s appeared in over 25 different shows.

Arnold Vosloo (Imhotep) got his start as a leading man on the stage in his native South Africa.

Shaun Parkes (Izzy) is also in the Oscar-nominated Notes on a Scandal (2006).

Crew Notes
Production designer Allan Cameron also designed the sets for The Mummy (1999). Over 150 cast and crew members returned to work on the sequel.

Returning sound designer Leslie Shatz got an Oscar nomination for his work on the first movie.

The Mummy Returns earned over $68 million in its opening weekend. At the time, it was the biggest non-holiday opening ever.

The three movies have made over $1.4 billion combined at the box office worldwide.

Health Notes
The Rock was suffering from food poisoning and sunstroke while filming. He lost over 10 pounds and said it was “the worst I have ever felt in my life.”

Brendan Fraser injured a disc in his back during filming.

Historical Notes
The Scorpion King, or King Scorpion, is considered one of the fathers of Egyptian civilization.

Anubis is the jackal-headed god of the dead.

Grave robbers in both ancient and modern times have stolen valuables out of almost every tomb in Egypt.

The Scorpion King’s tomb was discovered in 1898.

Ancient Egyptians celebrated the New Year in July to coincide with the flooding of the Nile River.

Legend has it, a bite from the Egyptian asp killed Cleopatra.

In 2012, the last missing pages from the real Book of the Dead were discovered in an Australian museum.

Horus was the name of the Egyptian falcon god. He was also known as the lord of heaven.

Dirigibles became popular in the ’20s, but they mostly disappeared after the Hindenburg disaster.

The Romans conquered Egypt in 30 B.C.

Location Notes
Some scenes are shot in the Merzouga Dunes of Morocco. Some of the dunes are over 400 feet tall.

Some scenes are shot in a sand quarry in England. For much of the movie, England stands in for the Middle East.

The outside of the O’Connell estate is Mentmore Towers. It was also Wayne Manor in Batman Begins (2005). It also doubled for the British Museum in the first movie.

The main temple at Abu Simbel was built by Pharaoh Ramses II as a monument to himself.

They shot this in Petra, Jordan. These canyons were also used in Indiana Jones and the Last Crusade (1989).

The cliffs in Morocco’s Todra Gorge are over 500 feet tall.

Plot Note
Over 70 people are killed in The Mummy Returns. That doesn’t include the walking dead.

Entertainment Weekly compared the pygmy mummies to the Velociraptors from Jurassic Park (1993).

Production Notes
Both The Mummy and The Mummy Returns are written and directed by Stephen Sommers.

Oded Fehr trained on horseback for months to prepare for his role.

Prop Notes
The miners use M2 Flamethrowers to fight off the scarabs. The same weapon is used in John Carpenter’s The Thing (1982).

John Hannah kept some of the props from the first movie and used them to decorate his home.

In 2013, one of the shrunken heads went up for auction online with a starting bid of $85.

Sommers: “I love the whole [Ancient Egyptian] culture and everything about that era.”

Oded Fehr: “I kept getting hurt all the time. I was all black and blue and it was very tiring.”

Arnold Vosloo (Imhotep) on the sequel: “Two years had passed, but it felt like we’d never stopped.”

Patricia Velasquez (Anck-su-namun): “I had 82 bruises when I finished.”

Ardeth Bay wasn’t a big speaking part in The Mummy. Oded Fehr (Ardeth): “I’m afraid I’ve become a bit of a blabbermouth in this [movie].”

Director Stephen Sommers: “I can’t believe I put a jungle sequence in a desert movie.” It’s one of his favorites.

Brendan Fraser: “It was a great opportunity to be a make-believe dad.” Fraser became a real-life dad a year after the movie came out.

Fraser on Weisz: “We were partners, we were colleagues, we were friends… We had that chemistry.”

Vosloo said his axe weighed about 50 lbs. After three days, he felt like his arms were coming out of their sockets.

Random Note
Alex has the Bracelet of Anubis. In 2013, actor Freddie Boath appeared on “House of Anubis.”

Script Notes
The sequel takes place almost ten years later, even though the movies were released two years apart. Writer/director Sommers joked that he wrote it that way because he “didn’t want to work with babies.”

In the original script, Jonathan owned a casino. They cut it to save money on sets.

Writer/director Stephen Sommers originally wanted the mummy soldiers to be the main villains of the sequel.

Set Notes
They used hundreds of real scorpions and tarantulas in the movie.

John Hannah (Jonathan) came up with the idea to fill the bathtub with bubbles. He slipped getting out and injured his knee.

It was hard to keep the torches lit. They only burned for three minutes at a time.

Rachel Weisz and Patricia Velasquez trained for five months for their fight scene. They did the fight without any stunt women.

In one scene, they wanted Rachel Weisz to run through a real crumbling set, but her contract wouldn’t allow it.

They digitally multiplied the real 200 horsemen to make an army of 10,000.

Stuntmen stood in for Anubis’s animated warriors on set. They held up antennas to simulate their height.

The filmmakers used twice as many special effects shots as they originally planned.

Trivia Notes
Rick and Evy battle scarabs in The Mummy. In Ancient Egypt, the bugs were a sign of immortality.

Hafez reads from the Book of the Dead. In reality, it’s a collection of spells for the afterlife not a magic book that brings people back to life.

Some of the first candles and torches were invented by the Ancient Egyptians in 3000 B.C.

There are more than 80 pyramids in Egypt. All of them were built on the west bank of the Nile River, facing the setting sun.

More than 90 percent of Egypt is desert.

Not being able to “go to the bathroom” while someone is watching is known as paruresis.

Karnak is an enormous complex of ruins near the ancient city of Thebes. It includes the Temple of Amon, who was considered king of the Egyptian gods.

The Ancient Egyptians did not believe in reincarnation.

There are 134 columns in the ruins of Karnak. They’re each over 70 feet tall.

The Temple of Philae is dedicated to Isis, goddess of motherhood, healing, and marital devotion.

There are oases along the Nile River. Some are over 20,000 acres.

The fastest airship in the world can go just under 70 mph. It was piloted by Steve Fossett in 2004.

In order to outrun the sunrise, Rick (Fraser) would have to run over 1,000 miles per hour.

The real Scorpion King’s tomb had 12 rooms and is believed to be a small replica of his palace.

Archaeologists learned to decipher hieroglyphics in 1898, but they still don’t know how to pronounce them.