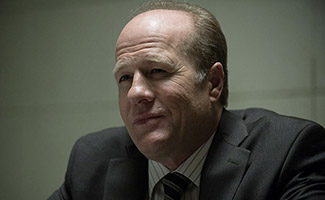 Gregg Henry (Carl Reddick on AMC’s The Killing) talks about developing his character, being a seasoned veteran on the set, and his favorite moment from Season 3.

Q: How did you feel about landing the role of a new detective on The Killing?

A: Well, I loved the show when it first came on, and loved the whole second season as well. It was such a bar-setter for a whole new kind of episodic television. I loved the show, and I couldn’t tell where it was going to go. I knew some of the writing staff too, so I was excited to get the part.

Q: What was your impression of Reddick when you tried him on for the first time?

A: With Reddick, we had to focus on creating the relationship between Holder and Reddick and telling their history in a few brief scenes to let the audience in on the new shape of Holder’s life. Reddick kind of influenced Holder’s fashion sense a little bit, and lightened him up a little bit, and gave him a more workaday outlook.

Q: Have you had a similar effect on Joel Kinnaman?

A: Yeah, finally the dude can dress! He’s a great guy and a wonderful actor, and we have a wonderful time together.

Q: Did you two do anything extra-curricular to cultivate the sense that you were partners?

A: There really wasn’t a situation were there was time for that. It’s, “Hello, how do you do? Rolling!” So we met on the first day. Through that first rehearsal, you try to jump in with both feet and try a lot of that attitude the character has to see how it plays. We became partners pretty easily, and I hope that shows.

VIDEO: Inside Episode 302 The Killing: What You Fear

Q: How confident are you in Reddick’s detective abilities?

A: He’s got a lot of years in, enough years that he may be wondering what life is like after being a cop. So I think, he’s ready to punch out when it’s time to punch out. He differs from Holder in that way. But he approaches his job seriously and wants to solve cases, do the right thing, no question about it.

Q: Did you ever worry your character would get overshadowed by the return of Linden?

Q: Reddick is good at keeping things light, even in grim situations. What do you do to keep things light on set?

A: Everyone here is really quite professional in their work. But I think everybody, because of their professional nature, is able to have a great time. It’s not really the kind of show where there are going to be a lot of hilarious outtakes. But it’s a beautiful work environment from top to bottom. Reddick is kind of a composite, as many characters that I end up playing are. But I actually knew an actor that was always able to inject a sarcastic levity into things, in a way that was dry enough not to break the mood but still kept things light. So I kind of borrowed from his approach a bit for the character.

Q: Reddick is a seasoned veteran on the force. As someone with acting credits stretching back to the ’70s, do you ever feel like that on the set of The Killing?

A: Well sure, that does happen more and more as you go along, that’s kind of the natural effect of time. But this cast this year is just like the all-stars, with people like Joel and Mireille.

Q: What was your favorite moment from this season?

A: I really like Reddick’s opening scene. We come into the scene, and it was my first experience where we’re working in Vancouver and it’s already raining. Then they turn on the rain machines as well, because it’s just not raining enough! Welcome to The Killing. Make sure you have rubber socks on. But that scene, it plays into us walking up the stairway and into the abandoned warehouse, where the body is discovered.