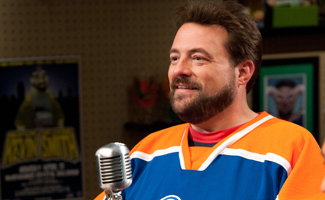 AMCtv.com catches up with Comic Book Men‘s Kevin Smith to find out what’s new for the show this season and his thoughts on hosting this year’s AMC Fearfest.

Q: Without giving too much away, what can we expect to see during Season 2 of Comic Book Men?

A: This year, we’re so lean and mean. The episodes move incredibly fast. Twenty-two minutes — you’re in and out. Bang! You get to make a big, bad impression. We’ve established the boys in their world. They’re very comfortable and very funny. We see much more amazing products this year. Like, stuff you haven’t seen since your childhood. I saw stuff, I’d never seen in real-life before. Walter finds his Rosebud, if you will. Stan Lee stops by. Brian O’Halloran from Clerks helps out for a day. There’s some funny sh*t.

Q: Which one of the guys from the Secret Stash do you think enjoys being on camera the most?

A: Ming, hands down. I don’t have to think about that twice. Ming loves having the cameras around. I mean, the dude likes to buy expensive jeans. So now he has people to appreciate them. Like, nobody in our world would say, “Ming, those are great jeans!” Brian and Walter would die before they’d think about complimenting a dude on his pants. But when Ming gets people seeing them on TV, he gets people tweeting, “Those pants are worth the money, Ming.” I think it makes him happy.

Q: How does everyone else feel about being on camera?

A: Brian is 50-50. He could go either way. With Walter, it’s weird. You’ll watch the show and he’s amazing. But it’s the last thing in the world he wants to do. Mike is totally comfortable. The person from the cast who may be happiest to see themselves on TV just might be Fatty McMillfly himself. I like watching me, on the show. Not because I think I’m awesome, it’s because those dudes, when we sit around the table and talk, when you see me laughing, that’s genuine laughter. And genuine laughter is precious. When you’re somebody that tries to make people laugh for a living, it’s very tough to find people that can do that, in turn, for you. It’s a reminder that a lot of things have changed since I worked at QuikStop, but I’m still hanging with the same people. They’re still the most interesting people in the world to me.

A: Dude, I gotta say, hosting AMC Fearfest — as a geek, this is one of the greatest honors you can hope to get. To be so associated with the geek genre, and by that association to get into the horror category as well, that’s tremendous. Last year it was George Romero! So that says to me one of two things: I’ve made it, or I’m gonna die soon, because there’s no good reason to let me host this.

Q: Red State was originally billed as a horror movie. Do you feel like that label still applies?

A: It’s such a wide genre at this point. You’ve got your subcategories of thriller and gore. You’ve got the PG-13 scare flicks too, which I sometime have a hard time considering horror, but someone could say, “What about The Others?” and I’d be like, “Yeah, that movie was pretty tight for a PG-13.” Then somebody could throw Jaws in your face, and you’re like, “Where does that go?” When I worked in video stores, that used to be in the horror section. It’s such a wide umbrella. So, yeah, I guess horror for Red State still applies. Horror is more varied now than when it began.

Q: How do you think it’s changed?

A: I think about horror from the era I was raised in, the ’70s and ’80s. For me, horror was defined by something that makes you cover your eyes. For my generation, that was an axe coming out and breaking someone’s head open, or a chainsaw ripping somebody apart, or someone wearing the skin of someone else, or someone wearing a hockey mask and just being unkillable. The generations before us could be scared by Dracula, but the generations following the Vietnam War, you can’t scare kids with Dracula anymore. Suddenly, you’ve got to up the ante. So you start seeing stuff like The Texas Chainsaw Masscare, which is still one of the greatest independent films ever made and most successful, plus a straight-up horror movie. Almost every famous filmmaker coming up the ranks has at one time worked on a horror movie.

Q: A lot of established filmmakers have taken a shot at doing horror, too. What do you think is the appeal of directing horror?

A: For me, as a guy who made a lot of comedies and jumped over to horror, the appeal was to push a different kind of reactive button in the audience. When you make a comedy, you want to make people laugh. The other side of that coin — the dark side, if you will — is getting that reaction where they jump out of their seats, or make them close their eyes, or react with an utterance of some sort, where you literally affect their heart rate or their emotions or their psyche or their mind.

Q: How do you see the genre of horror evolving?

A: A lot of people think making horror is easy, that it’s easy to scare people. But not anymore. Not in this day and age. Not when you can turn on the news and be truly horrified by something that’s happened. My era of what scared me as a kid, the era of the chainsaw and hockey mask, is gone. Freddy Krueger, Michael Myers, Jason Voorhees, these were my monsters, these were my Dracula. So eventually — now — these psycho maniacs aren’t as scary to kids these days. They’re seeing things like The Ring and they’re like,”Man, if you watch a video, you can go to hell.” So horror gives over to the next generation.