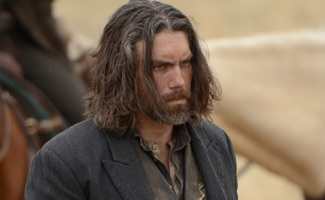 Anson Mount, who plays Cullen Bohannon on AMC’s Hell on Wheels, talks to AMCtv.com about evolving into a “tough guy” and the gun trick he stole from Clint Eastwood.

Q: How has life changed since joining the cast of Hell on Wheels?

A: Life fundamentally does not change depending on work or fame or success. I still do my own laundry, and I like doing my own laundry. It’s funny, in terms of visibility, I take off the period costume and I put up my hair and no one recognizes me. And I’m totally cool with that. I like my work to stand on its own as much as possible.

Q: Joe Gayton has said one reason he hired you was your “taciturn” approach to the character. Are you a man of few words in real life?

Q: [Laughs] Any other similarities?

Q: You’ve said you were “stealing from Eastwood” when asked about Western influences for Cullen. What did you steal?

A: I think the American Western laid down a kind of subject matter that’s about following your instinct or following your gut and having a sort of removed quality from your humanity. And I think Clint Eastwood helped to establish that. In terms of my performance, what I steal from Eastwood is ideas. There’s a scene this season in which my character is in a gunfight and I decided I wanted to have to change cylinders in the middle of the fight. I stole that idea from what Eastwood did at the end of Pale Rider.

Q: Is that something you had to train to do?

A: It is not as easy as it looks, and I drilled changing a cylinder without looking for a week. I did it hundreds of times until I could get it down.

Q: Cullen gets a new gun this season. Tell us about it.

A: I lose the Griswold when I get arrested by the Union troops, and I end up getting a 1858 Remington 45-caliber, which was Union issued, so it’s kind of like salt in the wound.

Q: Do you miss the Griswold?

A: I actually prefer the Remington, personally. [Laughs] I think Cullen does as well. I’m sorry, but it’s just a better gun. The Griswold was just a piece of s**t to start with, and you know they didn’t double the steel, so the reason it’s one of the rarest antique guns you can get your hands on is because they all rusted away.

Q: What’s the biggest change between Seasons 1 and 2?

A: The big question of this season is why is Cullen Bohannon sticking with the railroad. Why is he here? And hopefully that will be absolutely answered by the end of the season. I think for me, it’s also been about opening up different facets of the character. I want to find the parts of Cullen that are light, that are aware of humor, and that’s been a particularly exciting thing for me to do this year.

A: My friends still laugh at me as much as they ever did, especially now with this badass poster that’s up. They’re like, “Seriously?” But I definitely have been getting different kinds of offers recently. I’ve been getting action offers and “tough guy” roles, which I find hilarious.

Q: You have a movie coming out where you play a white supremacist, another morally ambiguous role. Do you think getting that part is a coincidence?

A: I wasn’t out there actively searching to play a white supremacist, but a great script came along and I saw it and I jumped at it. I’m really glad that I did it. For me, acting is play. It’s just play and it’s playing make believe really, really well.