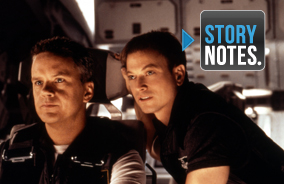 Weeknights during prime time on AMC, you can catch Story Notes — real time trivia and facts about your favorite movies! Below is the online version of the Story Notes for Mission to Mars.

In 1986, Tim Robbins (Woody Blake) had a brief appearance in Top Gun.

Gary Sinise also plays an astronaut missing out on the mission in Apollo 13 (1995).

Finance Note
Mission to Mars was one of the top grossing sci-fi movies of 2000, earning more than $110 million.

Historical Notes
Scientists did find proof of ice on Mars in 2008 using the Phoenix Mars Lander.

Scientists theorize that a massive meteor the size of Australia crashed into Mars three billion years ago. That could have transformed it from a warm blue planet suitable for life into a cold, arid one.

How-To Note
If a leak forms in a spacecraft, a good way to find it is to tear up some paper and see where it heads.

Location Notes
Dickinson is just outside of Houston, Texas, but they actually shot in Vancouver.

The filmmakers created the Martian landscape in a massive sandpit near Vancouver. It was one of the biggest sets ever constructed for a movie — around two million square feet.

Music Note
The movie’s eerie score was composed by Ennio Morricone (The Good, the Bad, and the Ugly).

Flash Gordon started as a comic book in 1934 and has been turned into TV shows and movies.

In 1985, astronauts really did drink soda in space as part of an experiment.

Slow, beautiful and minimal scenes in Mission to Mars are directly inspired by 2001: A Space Odyssey. Astronaut and technical advisor Story Musgrave says “2001 stands out as the standard” for sci-fi movies.

Mission to Mars has been compared to Ridley Scott’s Prometheus (2012) because of its “spiritual idealism.”

Press Notes
Mission to Mars played the Cannes Film Festival and was named the fourth best movie of 2000 by Cahiers du Cinéma.

Roger Ebert says Mission to Mars awakens “a sense of wonder that is the goal of popular sci-fi.”

Slant Magazine ranked it as one of the top 100 movies of the decade.

The New York Daily News says this is “one of the most gorgeous science-fiction movies ever.”

Astronaut and tech advisor Story Musgrave: “There could have been life on Mars. It’s reasonable.”

Director De Palma says he scaled the script down to “a finite number of very specific catastrophes.”

Tim Robbins on acting inside the suits: ”You hear your own breathing. It’s an interesting, very insular, world.”

Jerry O’Connell says he loved wearing the space suit on set: “I felt like a super hero.”

Astronaut Buzz Aldrin says they would never take their helmets off like that no matter the circumstances.

Director Brian De Palma tried to replicate the “magical glow” he saw in people that worked for NASA. He says “they have that kind of starry-eyed look.”

Gary Sinise: “I didn’t get to go on the spaceship on Apollo 13. In this one, I go on the ultimate ride.”

Gary Sinise took this role because he “really wanted to play Mr. All-American…I wanted to be ‘the Man.”

Effects Supervisor Hoyt Yeatman says this is a “hardware film.” Almost every location in the movie had to be created from scratch because it didn’t exist in the real world

Set Notes
They made the interior of the space station blue to mimic Earth.

They used a real 2,000 lb. rock to drop behind the astronauts.

The filmmakers received NASA’s most up-to-date plans for a Mars mission when making the movie.

All the ships were based on actual NASA aircraft and used materials from real aerospace companies.

Sinise was strapped in a chair that really rotated around and around until he asked De Palma to stop.

Tim Robbins and Connie Nielsen had 35 feet of space to dance, more than any actual spacecraft.

To create the illusion of weightlessness, De Palma kept the camera moving.

The crew put little film lights inside all the actors’ helmets to illuminate their faces.

In one scene, members of the crew shake the tent to create the illusion of wind. In reality, there’s almost no wind on Mars because the atmosphere is so thin.

All of the plants are real. They were grown hydroponically — in liquid, not soil.

Don Cheadle actually slept outside by himself to get a sense of the environment and isolation.

The crew reflected copper light onto the actors to mimic the orange atmosphere of the Martian sky.

The idea for the massive white room came from production designer Ed Verreaux. The whole structure is inspired by modern art. It’s simple, clean, and minimal.

That dust is blown by 10 massive 350-horsepower wind machines. The whole crew wore gas masks while they shot it.

Source Note
Mission to Mars was inspired by a book about how to make a self-sufficient colony on the Red Planet. It was called The Case for Mars by Robert Zubrin. De Palma gave a copy to most of the cast and crew.

Tech Note
Full-body weightless shots were created by hanging the actors from wires.

Trivia Notes
Mission to Mars explores the dangers and realities of a manned expedition to the Red Planet.

The rover used in the movie looks a lot like Sojourner, a rover that landed on Mars during the Pathfinder mission in 1997.

NASA actually conducted an experiment to see if a candle burns in zero gravity.

One of the biggest problems in planning a manned mission to Mars is taking enough fuel to get back.

There actually is a probe currently exploring Saturn, but it’s called the Cassini-Huygens.

If you unwrap all the DNA you have in all your cells, it would go to Mars and back 15 times.

NASA doesn’t actually know the radiation level on the surface of Mars. They began a rover mission at the end of 2011 to look into it.

Mission to Mars was produced by Disney.

“EVA” is Extra-vehicular Activity. It means going outside the spacecraft.

Mission to Mars signed a “Space Act Agreement” with NASA to get permission to use their logo. It was one of the first movies NASA made the agreement with.

Luckily, a manned spacecraft has never been struck by any object that caused so much damage. But the danger is definitely real. Meteors the size of a grain of sand can travel up to 20,000 miles per hour.

An independent Dutch company, Mars One, plans to have two people on the Red Planet by 2023.

You would actually expand very quickly and vaporize if trapped in space without a spacesuit.

There’s at least one American flag on Mars already. It’s on the outer deck of the Phoenix spacecraft that landed in 2008.

There aren’t really clouds on Mars like in the movie. They added them to make the sky more interesting.

Conspiracy theorists believe photos from the Viking space probe show a face on the surface of Mars.

A DNA signature is how scientists can distinguish an organism from all other species.

The idea that life was spread throughout the universe is called the “Panspermia theory.”

Dust storms can last up to six months on Mars.

The gravity on Mars is 62% less than on Earth.

Gore Verbinski (Pirates of the Caribbean) was originally going to direct Mission to Mars.

Tim Robbins won an Oscar for Mystic River (2003) three years after his role in Mission to Mars.

Wardrobe Notes
Each one of the space suits cost around $100,000 to make. But a real NASA space suit costs between $10-$12 million.

Every actor had their own “crew” to get into the space suits. It still took them 45 minutes. They also weighed 62 lbs. each.

Every suit has a different colored band. NASA uses that to tell the astronauts apart.

In the movie, Luke’s space suit becomes dirty. They didn’t use actual space suit material, Teflon, because it doesn’t ever look dirty.