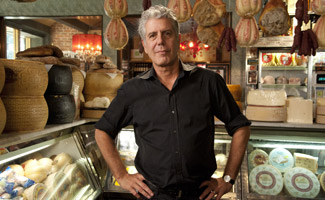 AMC announced today that Anthony Bourdain will host its second annual “Mob Week” airing Monday, July 30 through Sunday, August 5. The week-long programming event, celebrating one of film’s greatest genres, will feature 19 mob-themed movies spanning seven decades, including such iconic titles as The Public Enemy, The Godfather trilogy, Scarface, Once Upon a Time in America, The Untouchables, Goodfellas and Get Shorty, among others. Throughout “Mob Week,” AMC will also air a short-form documentary series featuring some of today’s most notorious mafia personalities and exploring such topics as the mob code, the family business and what it’s like to become a made man.

As host, Bourdain will introduce each night’s primetime movie and appear in vignettes throughout the film. Shot in locations around Manhattan’s Little Italy, the chef and TV personality, who authored the novel Kitchen Confidential, will discuss mob films and culture and, of course, draw an interesting connection between the mob and Italian cuisine. “As a long-time mob nerd, crime writer and would-be aficionado of a Sicilian American fraternal organization, this is a dream come true,” said Bourdain.

Additional “Mob Week” movies include such mob classics as Once Upon a Time in America, Miller’s Crossing, Bugsy, Capone and James Cagney’s 1931 classic The Public Enemy, among others.

AMC’s short-form documentary series, which airs throughout the week’s primetime films, takes viewers inside the Mafia and mob life, including the last interview with the late Henry Hill. Shorts include:

• “The Family Business” (airs during The Godfather): Sons of the mob, Johnny Fratto and Sam Gianccana, Jr., explain why the mob is the ultimate family-owned business. A legacy rich in tradition is passed down from father to son. Sometimes that succession is unsettling, violent and inescapable. Is the lure of money and power too tempting to escape? Fratto explains how he was able to respect his legacy without following the path of his father, while mob experts and law enforcement officials weigh in on the comparison of the mob operation to a legitimate family business.

• “The Mob Code” (airs during The Godfather Part II): Honor and deceit are key themes in The Godfather Part II and AMC will introduce viewers to the “Mob Code” and what it means to be a made man. Plus, mob experts and authorities provide perspective on how some of the greatest families have been brought down from carelessness and deceit from within.

• “Made For The Mob” (airs during Goodfellas): The late Henry Hill shares his experience being inducted into the mob, the qualities that made him fit in and whether he regrets the decisions he made. In addition, law enforcement and mob experts explain the lure of the mob to its blue collar core.

• “The Chicago Way” (airs during The Untouchables): Sam Gianccana Jr., son of outfit boss Sam Giancanna, outlines the “Chicago Way” – if someone puts one of your guys in the hospital you put one of them in a grave. Gianccana details how the mob owned Chicago, from the beat cops to the judges as well as the cat-and-mouse game they played with the Feds, before the experts detail how the government got around Chicago’s “business as usual.”

• “Power and Drugs” (airs during Scarface): Mob personalities take viewers into the world of power and the paranoia that comes with it. Mob experts and cops recount the sudden transformation of Miami from a sleepy retirement destination to a blood-soaked cocaine mecca in the 80s and how a dictator on a small island orchestrated an attack on America without ever firing a single shot.

• “Divided Loyalties” (airs during Donnie Brasco): Mob experts and cops share the many ways law enforcement have successfully infiltrated the mob, while Henry Hill, a man who lived on both sides of the law, brings viewers inside the struggle to do what’s right when family loyalties are put on the line against a life behind bars.