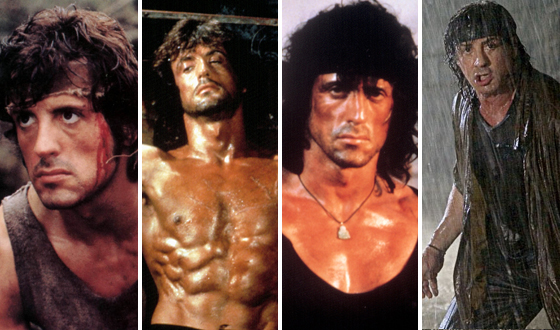 Grab your fatigues, strap on a headband, and get ready for AMC’s Crazy About Rambo. Starting on Sun., Jul. 29 at 1:30PM | 12:30C, you can catch all four explosive flicks in the Rambo Franchise. Don’t have your jungle warfare gear assembled yet? No worries. You can experience the Rambo marathon on-air and online. Check out the Rambo schedule then…

John Rambo
He’s spent a lot of time fighting battles at home and abroad. But where was he born?

Rambo III
Which Guinness World Record did Rambo III hold when released in 1990?

Rambo (2008)
Why did Stallone keep his shirt on throughout the fourth installment of the franchise?

Rambo Movies
How well do you know the entire series?

Sylvester Stallone
He’s been Rambo and Rocky. Which other iconic movie hero did Stallone lobby to play?

Rambo Movies
Rambo: First Blood is holding a strong lead against the other films. Do you agree with the latest results? Cast your vote now!

Top Sylvester Stallone Action Movies
Think the Rambo flicks are Sly’s best movies? Vote now to make sure they stay at the top of the list.

The Best Movies of Sylvester Stallone
The top five spots are close with Rocky and Rambo duking it out. Weigh in on which you think should be number one!

Story Notes for Rambo: First Blood Part II.
Get the inside scoop on the second installment of the Rambo franchise, including behind the scenes info and facts about the cast and crew.

Which Stallone Role is Toughest?
Is John Rambo tougher then Cosmo Carboni? Only you can decide.