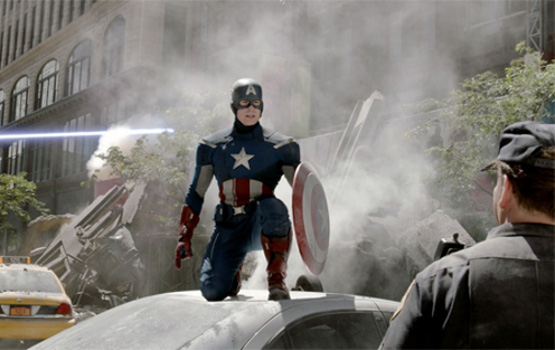 While The Avengers has yet to be released, Captain America fans can rest easy: The Star-Spangled Avenger will return to theaters in a second solo outing on April 4, 2014. (For those keeping score, Iron Man 3 will hit on May 3, 2013, while Thor 2 bows November 15, 2013.)
Of course, this announcement brings several questions. (Like, why is what was presumably a summer movie being released in early April?) All we know so far is that the story will continue from The Avengers with Cap still out of place in the modern world. (Presumably there will be World War II-era flashbacks, but nothing has been confirmed yet.) Chris Evans will return as Steve Rogers, but beyond that, casting is up in the air. With Red Skull having been disintegrated by the mystical Tesseract at the end of Captain America: The First Avenger, it’s anyone’s guess whether he’ll return for the sequel. So who should get the brunt of Cap’s shield? Check out some possible villain contenders for Captain America 2 …

Baron Zemo
Outside
of Red Skull, Nazi scientist Dr. Heinrich Zemo may be Captain America’s
most dangerous villain. Capable of building bizarre weapons of mass
destruction, Zemo fled Germany after the war and ended up leading the
Masters of Evil, a Legion of Doom-style villain alternative to the
Avengers. In recent years, his son has taken up the mantle of
world-conquering supremacy. Zemo would be a good addition to the movie
storyline, as he shares a World War II background with Cap. Maybe he was also cryogenically frozen and is awaiting a world where he can get
revenge on Captain America and also find a hat that matches that purple
ski mask over his head.

Winter Soldier
You
may think that Captain America’s plucky sidekick Bucky (played by
Sebastian Stan) perished in the first movie. But, of course, no one ever
really dies in comics. Bucky returned to the Captain America
comics a few years back after being presumed dead for decades. This
time, he was different, having been transformed into the killer assassin
Winter Soldier by Russian general Alkesander Lukin. (He later took over
the Captain America mantle when Steve Rogers died. Don’t worry —
Rogers got better.) Introducing Winter Soldier into the mix along with
some World War II flashbacks could be a good way of giving the
underutilized Bucky (and Stan) more to do in the sequel. Plus, what’s
cooler than a sniper with a robotic arm?

Crossbones
Mercenary.
Henchman to Red Skull. The guy who killed Captain America (in the
comics). The gun-toting, masked baddie known as Crossbones has been a
fan favorite ever since his first appearance way back in 1989’s Captain America
#359. A ruthless terrorist in the mold of Batman’s Bane, the
muscle-bound Crossbones could easily up the sequel’s action quotient.
(And also its bodycount.) As a mercenary, Crossbones works for the
highest bidder, meaning you never really know whose side he’s on.
(Though it’s usually his own.) Plus, there could be some scenes
featuring Taskmaster, another skull-faced bad guy who trained Crossbones
in the ways of head-smashing. And speaking of smashing …

Flag-Smasher
Yes,
he has an incredibly dumb name. But when you’re a hero who wears the
American flag on your chest, chances are a villain will come along who
wants to smash said flag. And in recent years, ace Captain America
scribe Ed Brubaker and other writers have turned Flag-Smasher into an
anti-nationalist terrorist who leads ULTIMATUM (Underground Liberated
Totally Integrated Mobile Army to Unite Mankind), a group that was at
one point funded by none other than the Red Skull. Having Captain
America face off against villains with an anti-American sentiment could
help make the sequel feel topical and relevant.

Madame Hydra
The multifaceted terrorist organization Hydra was already established in Captain America: The First Avenger.
So why not introduce its sultry modern-day leader as a way of injecting
some spice into the sequel? Madame Hydra (a.k.a. Viper) could provide an
opportunity to cast another actress to face off against Hayley Atwell,
should she return as Peggy Carter’s niece (and SHIELD agent) Sharon
Carter. Since Red Skull is established as the leader of Hydra in the
first film, it could be fun to see Red and Madame Hydra butting heads
for control. Plus, where Hydra goes, SHIELD is sure to follow. Fun fact:
Viper has appeared in a Marvel movie before — she was played by Sandra
Hess in the 1998 Nick Fury TV movie starring David Hasselhoff.

Aleksander Lukin/Red Skull
In Ed Brubaker’s acclaimed Captain America series, Soviet general Lukin is responsible for killing the Red Skull and
bringing back Bucky as the deadly Winter Soldier. However, being a
crafty fellow, Skull transferred his mind into Lukin’s body via the
Cosmic Cube (a.k.a. the Tessaract in the movie) in order to continue his
dastardly deeds. Using Lukin (and adapting Brubaker’s story) could help
to explain how Bucky and Red Skull join Cap in the modern-day world. And if Red Skull returns, perhaps his insane daughter Sin (who has
become a prominent villain in the Marvel Universe thanks to her role in
the Fear Itself crossover series) could join her pop in terrorizing Captain America.
Read More
Share