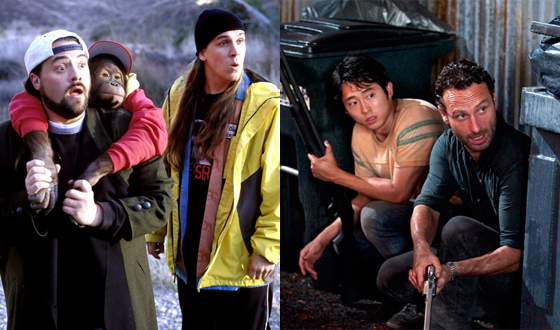 Kevin Smith movies like Clerks and Mallrats don’t appear to have much in common with The Walking Dead, right? Wrong! Actually, they may be more similar than you think. On an earlier episode of AMC’s Talking Dead, the after show’s host Chris Hardwick asked Smith and comedian Paul F. Tompkins to listen to various quotes then identify whether they were from a Kevin Smith movie or from an episode of The Walking Dead. Smith was able to ace the quiz  but Tompkins flunked it. Now it’s your turn: Play the Kevin Smith Movie or The Walking Dead Ultimate Fan Game and see if you can tell see which quote goes with which movie.