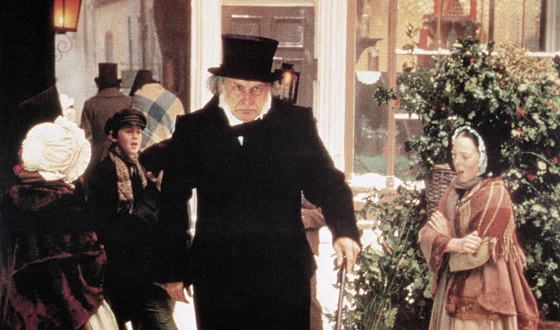 You know the story: a trio of mischievous spirits haunts Ebenezer Scrooge. But this faithfully adapted and superbly cast version of Charles Dickens’s A Christmas Carol is a cut above the rest. The 1984 retelling of the magical Christmas tale has become a movie staple of the holidays. What makes it an annual tradition? You can see for yourself during AMC’s Can’t Get Enough Christmas Carol, starting on Mon., Dec. 5, at 8PM I 7C. In the meantime, here are ten reasons why we can’t get enough of it every year.

10. Location, Location, Location
From Scrooge’s dank office to the snow-covered streets, the filmmakers didn’t skimp on details. So it’s hardly surprising that A Christmas Carol was filmed on location in Shrewsbury, England — famed for its historical buildings, odd-angled streets, and spooky graveyard. These real-life locales give the production a convincing old-world atmosphere that anchors a story that — even for Dickens — can get a little out there.

9. Dickens Does Time Travel
Are our futures set in stone? This is one of the conundrums Scrooge faces when he witnesses his own dismal fate. While the old man is hardly Marty McFly in Back to the Future (Ebenezer probably can’t stand Chuck Berry, for instance) — and there’s no talk of rupturing the space-time continuum — you can’t help but admire the way Dickens played with temporal paradoxes before H. G. Wells was even born.

8. Victorian Men’s Fashion
Watch this movie and try not to get lost in the dense manes of facial hair that line the cheeks of Ebenezer Scrooge, Bob Cratchit, and Mr. Fezziwig. Muttonchops appear with the wild abandon of frosted tips in the nineties. But classy. Meanwhile, the top hat offered the fashionable but short-statured man of the era a dream come true — a full foot of added height. And the waistcoats — oh, the waistcoats!

7. Office Space, 1840s-Style
If you thought modern corporations were bad, well, they are. But they hardly compare to the toxic workplace of Ebenezer Scrooge, who underpays employee Bob Cratchit and browbeats him for not wanting to work on Christmas. Unfortunately for Cratchit, they haven’t yet invented a fax machine in order for him to stomp out his aggression in the manner of Office Space. Maybe an inkwell?

6. Old-school Special Effects
Who needs CGI when you have smoke machines, dry ice, and double exposures? Seriously. Dark lighting and cadaverous makeup go a long way toward creating a trio of believable spirits. The award for most creative effect goes to the cone used by the Ghost of Christmas Past to look into Scrooge’s not-so-happy childhood. He later uses it to snuff her out like a candle. We don’t know how they did it and don’t understand the symbolism, but we like it.

5. Ebenezer Scrooge, Environmentalist
Little-known fact: Scrooge had “gone green” years before it became fashionable. “Garments were invented by the human race as a protection against cold,” Scrooge says. “Coal burns. Coal is momentary. Coal is costly.” Indeed, how dare Mr. Cratchit put another piece of coal on the fire just because he’s cold? Live sustainably, my dear man! Greenpeace may have a new spokesperson.

4. Ghost of Christmas Present
In following Dickens’s text, the movie features a Ghost of Christmas Present who is highly virile. He looks like Santa Claus’s demented brother-in-law, wearing green instead of red and sprouting significantly more chest hair. But don’t let the wreath around his head and the merry manner fool you. He dispenses some tough love to Scrooge that shows he’s no Jolly Green Giant.

3. Cutest Tiny Tim Ever
Haley Joel Osment in his prime had nothing on Anthony Walters’s Tiny Tim. It’s his first film performance, and your heart can’t help but go out to the helplessly adorable crutch-wielding waif. He’s an OshKosh B’Gosh commercial and a PSA about childhood malnourishment in one. And his line reading of “God bless us, everyone” is to die for.

2. “Humbug!”
Other curse words have taken its place, but few compare to the invective power of “humbug.” Scrooge knows a well-placed “humbug” is good for any occasion — and he uses it more often than Samuel L. Jackson dropped the F-bomb in Jackie Brown. It’s the perfect comeback to ghosts rattling chains in your bedroom or anyone who has the nerve to cry “Merry Christmas!” It makes a nice addition to any vocabulary.

1. George C. Scott
As the ultimate workaholic and misanthrope, George C. Scott was made to play Ebenezer Scrooge. It’s hard to believe anyone would harbor a vendetta against chestnuts and egg nog, but Scott is a veteran of such films as Patton and Dr. Strangelove: he knows how to play characters with screwy worldviews. You believe his senile cynicism, and, more importantly, you believe his gradual transformation into a human being. Even if his reformed Scrooge still retains a demonic cackle.