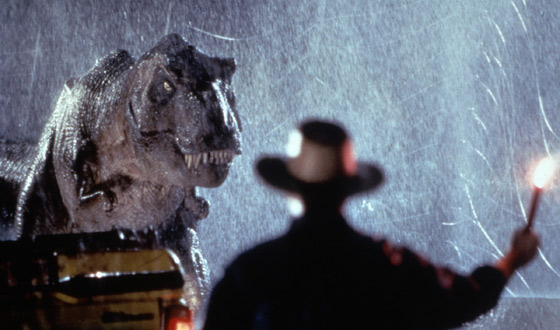 Steven Spielberg is the king of crowd-pleasing entertainment: cerebral sci-fi, rousing adventure, grim war movies, and everything in between. Since launching his career as Hollywood’s boy wonder, he’s built up a record for making hit after hit, and he’s still going strong. But which of his movies reigns supreme with viewers? What follows is how you’ve ranked Spielberg’s movies.

1. Raiders of the Lost Ark (1981)
This first lash in the Indiana Jones saga clearly hooked AMC’s viewers — swiping the greatest treasure of all, the top spot. Inspired by the cliff-hangers of his childhood, Spielberg’s globe-trotting adventure blends ancient ruins, evil Nazis, star-crossed romance, and so many snakes! As Indy, Harrison Ford is a shaggy but charming matinee idol who turns archaeology into a sexy if perilous profession. All four Indy movies pack a punch, but your votes say it all: the first is the best.

2. Schindler’s List (1993)
Over three hours long and shot largely in black and white, this soul-scraping Holocaust drama might have been a serious gamble with anyone else in the director’s chair. But Spielberg knew how to connect with his audience even when dealing with the most harrowing of subjects. The results are an epic retelling of one of history’s greatest horrors — and most moving acts of courage. Schindler’s List won Oscars for Best Picture and Director, and the film certainly resonates with AMC viewers, who voted it the runner-up.

3. Saving Private Ryan (1998)
Saving Private Ryan‘s nerve-jangling opening sequence, depicting the bullet-riddled landing at Omaha Beach, is a world apart from most war movies: terrifying, chaotic, and explicit about the amount of bloodshed that a D-day victory entailed. A stirring but clear-eyed tribute to the sacrifices of veterans, Saving Private Ryan has clearly remained in the memories of voters, edging into the winner’s circle at No. 3.

4. Jaws (1975)
Jaws is a milestone on multiple fronts. Spielberg’s painfully suspenseful shark movie scared the bathing suits right off beachgoers, launched the phenomena of summer blockbusters, and showed off the 28-year-old Spielberg as a very serious talent. AMC viewers recognize the brilliance, placing the movie in the top five. And no wonder: Jaws was a huge financial success and a masterpiece of pacing and suspense.

5. Jurassic Park (1993)
Who else could helm a movie about a dinosaur theme park? Spielberg was perfect for shepherding Michael Crichton’s prehistoric fun house to the screen and bringing dinosaurs back to life with the latest in CGI technology. Eighteen years after Jaws, he showed he could still make a scary and exciting movie about man-eating monsters. Ranking it No. 5, AMC viewers think Jurassic Park is essential viewing as well.

6. E.T.: The Extra-Terrestrial (1982): A young boy bonds with an alien who looks like a melted Tootsie Roll. Weird concept, but it works. You can’t find one person who doesn’t cry by the end of this modern fairy tale. Hence the No. 6 ranking.

7. Close Encounters of the Third Kind (1977): Aliens — friends or foes? Spielberg first showed his penchant for sci-fi with this visually stunning movie that keeps you guessing about the motives of our visitors from the stars.

8. Catch Me If You Can (2002): AMC voters appreciate a change of pace, ranking this light adventure No. 8. With identity swapping, around-the-world travel, and vintage fashion, this is one of Spielberg’s most fun movies.

9. Empire of the Sun (1987): Lost childhoods are common in Spielberg movies. His best take on the subject is this gritty story of a British boy interned in a Japanese prisoner-of-war camp. No, your eyes do not deceive you: the kid is a tiny Christian Bale.

10. Minority Report (2002): Tom Cruise stars as a crime fighter who’s able to predict murders before they happen. The director must share similar abilities — the sci-fi head-spinner took in over $300 million at the box office and snags the final spot in your top ten.