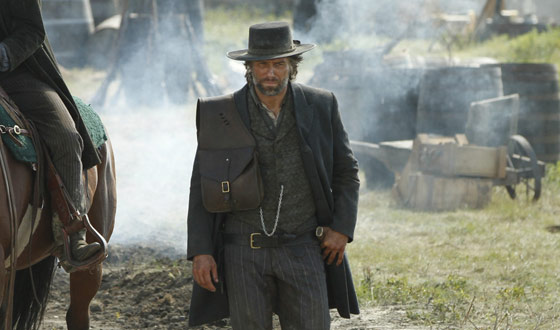 After breaking the Western mold with the hit mini-series Broken Trail, AMC returns to the genre with the epic drama Hell On Wheels, starring Anson Mount (City by the Sea, Cook County), Common (Just Wright, Date Night), Colm Meaney (Get Him to the Greek), Dominique McElligott (Moon), Ben Esler (The Pacific), Philip Burke (Mercy), and Eddie Spears (Into the West). The series is written and produced by Joe and Tony Gayton (Faster, Murder By Numbers) and John Shiban (X-Files, Breaking Bad). The project is developed by Endemol USA and Jeremy Gold, Endemol USA’s SVP of scripted programming serves as executive producer. David Goldberg is Chairman of Endemol North America. The pilot is directed by David von Ancken (Californication, Seraphim Falls).

Hell on Wheels transports audiences back to post Civil War America and examines the struggles and hardships of rebuilding and repairing our country after the bloodiest war on American soil. The series examines the railroad’s institutionalized greed and corruption, the immigrant experience, the plight of the newly emancipated African-Americans during Reconstruction, and the ravaging of the Native American land and people, in the name of progress. The main throughline of Hell on Wheels is the story of Confederate soldier Cullen Bohannon (Anson Mount) and his quest for revenge over the wartime death of his wife. Over time, Hell on Wheels chronicles this potent turning point in our nation’s history, and how uncivilized the business of civilization can be.

“Since Broken Trail, AMC has looked for the next expression of an original Western series. Hell on Wheels is an incredibly powerful story that captures the intensity and inspiration of the American West at a time when nothing less than the future of the nation was at stake. The characters and the story that Joe and Tony Gayton, Jeremy Gold, and John Shiban have created; and that our terrific cast and crew have realized is compelling, epic, and a truly original take on a classic American genre of storytelling.”

Based on true historical events, the series is shot in rural Alberta, Canada, using the province’s extensive natural beauty to capture the feel of the American frontier. Hell on Wheels is led by a cast that includes Anson Mount as Cullen Bohannon, a former soldier hell bent on avenging his wife’s death, musician/actor Common as Elam Ferguson, an emancipated slave working to achieve true freedom in a world entrenched in prejudice, Dominique McElligott as Lily Bell, a newly widowed woman trying to survive in a man’s world, Colm Meaney as Thomas “Doc” Durant, a greedy entrepreneur taking full advantage of the changing times, Ben Esler as Sean McGinnes and Philip Burke as Mickey McGinnes, two young brothers looking to find their fortune in the new West and Eddie Spears as Joseph Black Moon, a Native American man torn between his culture and the changing world around him.