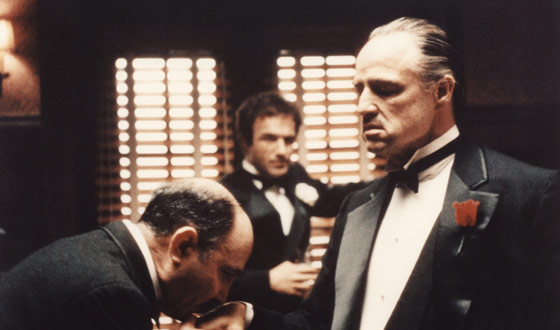 AMC’s announces its first annual “Mob Week” beginning Mon., Aug. 1 at 8/7c and continuing for 130 hours, through Sun., Aug. 7. The week will take an authentic in-depth look at “family” men and their greatest “hits” both in fiction and in fact. Hosted by real-life mob buster and former New York City Mayor, Rudolph Giuliani, AMC will air a line-up of some of the most critically acclaimed gangster films of all time — including The Godfather, Scarface and Carlito’s Way, among others.

In addition, the network will bring you short form documentary segments that examine the history, impact and real-life costs of the mob, from the inner workings of the Mafia to the reality of being a made man. The series will feature interviews with a wide range of mob experts as well as some of today’s most notorious mafia personalities, including Henry Hill, Johnny Fratto, and Sam Gianccana Jr., who attempt to separate truth from fiction in the depiction of the mob and offer a unique perspective on both the films and the headline making events that may have inspired them.

Throughout “Mob Week”, New York City’s former mayor Rudolph Giuliani will talk in depth about his personal love of these classic films, as well as his connection to real life mobsters. During his time as D.A for the Southern District of New York, Giuliani indicted eleven organized crime figures, including the heads of New York’s so-called “Five Families” on charges including extortion, labor racketeering, and murder for hire. At the time, Time magazine called this “Case of Cases” possibly “the most significant assault on the infrastructure of organized crime since the high command of the Chicago Mafia was swept away in 1943.” Eight defendants were found guilty on all counts and subsequently sentenced on January 13, 1987 to hundreds of years of prison time.

“The Family Business” (airs during The Godfather)
Sons of the mob, Johnny Fratto and Sam Gianccana, Jr., explain why the mob is the ultimate family-owned business. A legacy, rich in tradition, is passed down from father to son. Sometimes that succession is unsettling, violent and inescapable. Is the lure of money and power too tempting to escape? Fratto explains how he was able to respect his legacy without following the path of his father, while mob experts and law enforcement officials weigh in on the comparison of the mob operation to a legitimate family business.

“The Mob Code” (airs during The Godfather Part II)
Honor and deceit are key themes in the Godfather Part II. AMC will introduce viewers to the “Mob Code” and what it means to be a made man. Plus, mob experts and authorities provide perspective on how some of the greatest families have been brought down from carelessness and deceit from within.

“Made For The Mob” (airs during Goodfellas)
The real Henry Hill shares his experience being inducted into the mob, the qualities that made him fit in and whether he regrets the decisions he made. In addition, law enforcement and mob experts explain the lure of the mob to its blue collar core.

“The Chicago Way” (airs during The Untouchables)
Sam Gianccana Jr., son of outfit boss Sam Giancanna, outlines the “Chicago Way”. It’s a tradition that says if someone puts one of your guys in the hospital you put one of them in a grave. Gianccana details how the mob owned Chicago, from the beat cops to the judges as well as the cat and mouse game they played with the Feds, before the experts detail how the government got around Chicago’s “business as usual.”

“Power and Drugs” (airs during Scarface)
Mob personalities take viewers into the world of power and the paranoia that comes with it. Mob experts and cops recount the sudden transformation of Miami from a sleepy retirement destination to a blood-soaked cocaine mecca in the 80s and how a dictator on a small island orchestrated an attack on America without ever firing a single shot.

“Divided Loyalties” (Donnie Brasco)
Mob experts and cops share the many ways law enforcement have successfully infiltrated the mob, while Henry Hill, a man who has lived on both sides of the law, brings viewers inside the struggle to do what’s right when family loyalties are put on the line against a life behind bars.

“Leaving the Life Behind” (airs during Carlito’s Way)
Mob experts weigh in on the ways the mob has served as its own worst enemy, while mob personalities bring viewers into the world of crime where things don’t always go as planned and recount some of the most memorable missteps that have been made by the mob.

Online, AMCtv.com will present exclusive video of a roundtable interview in which Frank Cullotta, Henry Hill and Johnny Fratto discuss living by the code, life in jail and just how real The Godfather movie is. Additionally, AMCtv.com will have Ultimate Fan Movie Trivia Games for Mob Week’s prime time movies, an online tournament in which The Godfather characters battle each other for the title of mafia don, behind-the-scenes video from The Godfather trilogy, and daily blog posts that take a unique perspective on the greatest mob movies of all time.