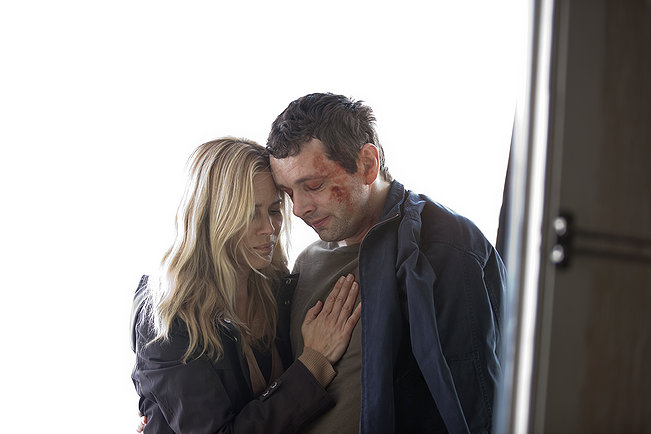 In Shawn Ku’s Beautiful Boy, a married couple learns of a violent school shooting at their only child’s college campus. The twist? Their son turns out to have been the shooter, and has taken his own life at the conclusion of the bloody melee. Maria Bello and Michael Sheen, who play the emotionally devastated parents, called FilmCritic.com to talk about what draws them to a script, how parenthood changes an actor’s perspective, and the next round of The Twilight Saga.

Q: This is the first time I’ve ever interviewed an actor who has played an O’Connell onscreen.

Maria Bello: When did I play an O’Connell?

Q: You played Evelyn O’Connell in the third Mummy movie, Tomb of the Dragon Emperor.

MB: [Laughs] I forget half of my names in all of my films. But I do
remember certain lines from different movies, which will come back to me
at random times.

Q: When you contemplate a serious project like this, where you
know the subject matter is going to be emotionally raw and complicated,
what are you looking for in the script? Is it honesty? An emotional
attachment?

Michael Sheen: Oh, it’s all of it, really. The first thing, when I read
the script, is that I need to care about what happens and feel
compelled by the story and engaged by the characters. It needs to
resonate with me, even if what the characters are going through is not
something that I have experienced in my life. I have to feel like it has
some sort of meaning to me. And then, as an actor, I need to feel like
it is going to challenge me. And finally it’s about finding out the key
people I will be working with, from the director to my co-stars. Hopefully all of those things are in the film’s favor, as they were in
this case.

MB: All it is for me is a gut reaction. It’s about feeling connected
emotionally to the script. I just know when I am supposed to do certain
projects. I received this script maybe a year before we actually filmed
it and just knew I wanted to play this woman.

Q: What, specifically, did you want to explore in her?

MB: You know, she’s just so emotionally deep, and the script really
takes on the human condition. It explores the relationship between this
married couple in a very deep way. With the loss of a child, there was
so much going on that I found intriguing and was curious to explore.

Q: Do you think you could have played this material as effectively had you tried it before your son was born?

MB: Oh, no. I think that being a mother gives you a whole different
take on life, not only in this part but in general. With a lot of the
parts I’ve played, I think that I would have played them a lot
differently now that I am a parent. Having my son certainly made me a
more compassionate person and, hopefully, a better actor. I always say
that the day I had my son I never had been so happy and so sad in my
life. I was so in love, but I also realized that I wouldn’t be able to
keep him from all of the painful lessons that he’d have to learn.

Q: Michael, the scene that resonated with me was you calling your
son’s cell phone and leaving him a voice-mail message after he has died.

MS: You know, that was the end of the first day of filming.

Q: It felt so real, how your character just wanted to hold onto a physical reminder of his son.

MS: It was a difficult scene for me as well because, as you are
saying, it is such a powerful idea. For my character, his son’s voice
was still a living thing. It is still alive. So to get a sense of the
life in that scene — it wasn’t a photograph or a handwritten letter. It is a living voice. And so because I was aware of what a powerful idea
that was, it was hard not to be affected by that in the wrong way. I
didn’t want to give it too much emphasis or to play it as too heavy of a
thing. But it was, and is, a very powerful scene.

Q: Michael, have you wrapped your work on The Twilight Saga: Breaking Dawn?

MS: Oh, yes, I finished a long time ago, and I think they finished the entire shoot not too long ago.

Q: Are you ramping up for the big publicity push for that film?

MS: The last time, I did the L.A. junket. I think, obviously, Rob
[Pattinson] and Kristen [Stewart] do a lot more than I have to do. But I
guess it will be the same this time around. I’m really looking forward
to it.