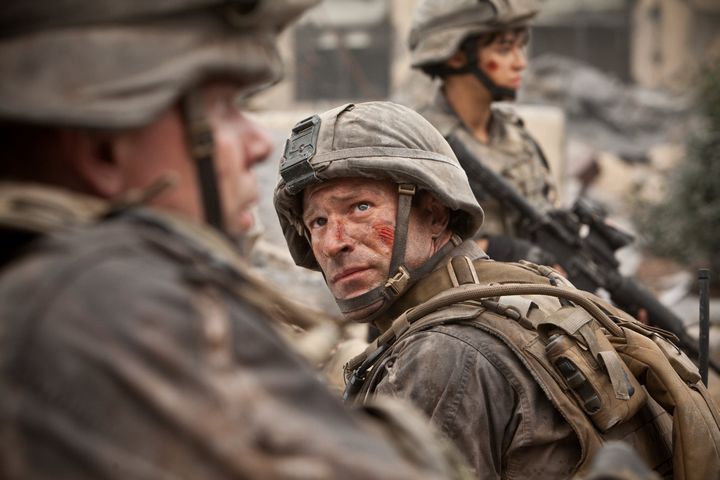 Aliens destroy the world, and married men destroy themselves: in Battle: Los Angeles, an intrepid squad of marines are all that stand between Southern California and some genocidal aliens, while the new Farrelly brothers comedy, Hall Pass, shows the disaster that results when married men are let loose from the confines of the sacred institution. These and a mixed bag of other offerings (Red Riding Hood, yet another Big Momma sequel) are coming this week to Blu-ray and DVD.

Another example of how special-effects technology is at long last catching up to the dreams of science-fiction filmmakers, this slam-bang exercise in militaristic bug-hunting has an alien armada establishing a beachhead in Los Angeles. Who can save California? A squad of marines led by Aaron Eckhart, of course. Our critic thought it was an “entertaining thriller” that falls somewhere between the “pointless character prattle” of Skyline and the patriotic machismo of Independence Day.

In the latest gross-out buddy comedy from the Farrelly brothers, Owen Wilson and Jason Sudeikis play a couple of whiny husbands whose wives offer to give them a week off from marriage with no explanations required. This leads to many embarrassing attempts at picking up women and some extremely regressive behavior. Unfortunately, our critic says, “none of that translates into comedy” in a film that (for Farrelly fans, at least) takes too long to get “to the next exploding-diarrhea joke.”

Legend of the Fist: The Return of Chen Zhen

Set in the twenties, this hyperkinetic delivery from Infernal Affairs director Wai-keung Lau mixes up nationalistic fervor, fetishized Jazz Age gangster culture, and supremely over-the-top fight choreography to
showcase its leading man — Donnie Yen, playing cinematic folk hero Chen
Zhen — as he battles the forces of evil (namely, the Japanese). Although
our critic found the drama to be an “outright bore,” he appreciated
Lau’s apparent desire to deliver “nothing more than an old-fashioned stylized martial-arts flick with plenty of spin kicks to spare.”

Amanda Seyfried stars in this gothic reimagining of the old fairy tale,
directed by Catherine Hardwicke of Twilight infamy. In this version, a werewolf is haunting a lonely village and threatening our titular blonde scarlet-cape-wearing heroine. According to our critic, there’s little to recommend about this “menacing bore” of a film, “where the iconography of a red cape and a salivating wolf are plunked into a [Tim] Burton-[Baz] Luhrmann mash up that is neither meaningful nor entertaining.”

Yes, Martin Lawrence is still with us, making Big Momma films for apparently no other reason than to see who can make the lowest denominator comedies out there: he or Eddie Murphy. Our critic termed this sequel a “DOA dung heap,” adding, “Martin Lawrence needs to hang up the muumuu. It no longer suits him — if it ever did.”