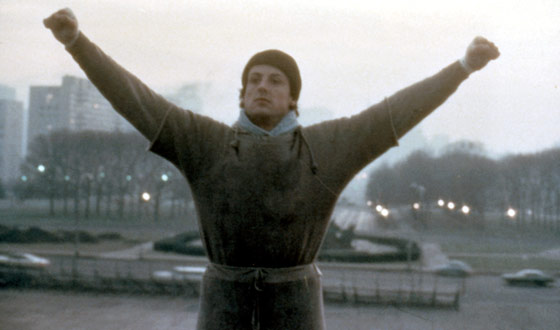 Odds are that, at some point, somebody in a suit worth more money than you make in an entire year has suggested that your favorite action movie be rebooted. You may take umbrage, thinking, “How dare they consider remaking Dirty Harry?” And you’re right (though I have previously speculated in this column that it might happen and, if so, whom should be cast). But a fancy (and favorably reviewed) reboot of the X-Men franchise is currently on display; recent reboots of the Batman and James Bond franchises have worked wonderfully; and second reboots for Superman and Spider-Man are on the way, as is a reboot of Conan. Our favorites probably won’t be left alone. But if only five franchises could be protected, what would they be? Here are my picks.

1. Rocky
While another Rambo movie could come to be, Sylvester Stallone put his signature character out to pasture with an intense yet poignant finale, Rocky Balboa. This story with this character doesn’t need to be told again. Rocky has become a metaphor, a story template for other movies, and the Italian Stallion should stay that way. I wouldn’t even want to see the casting tape of 50 young actors trying to imitate Sly’s iconic “Yo, Adrian!” Gross.

2. Indiana Jones
The Indiana Jones trilogy (Kingdom of the Crystal Skull didn’t happen — you hear me?) was a throwback to the great adventure stories our parents and grandparents used to see at a Saturday picture show. They worked for nostalgia’s sake, and they stand up on their own as some of the greatest action movies of all time. Harrison Ford was so good that I think of him as Indy before I think of Han Solo. (Yup, I said it.) Much as with Rocky, nobody could be Indy besides Ford. Trust me on that one.

3. Lethal Weapon
Lethal Weapon doesn’t exactly have an original premise (two cops: one’s crazy, one’s not), so it could easily be reinvented. But the chemistry between Mel Gibson and Danny Glover is probably not going to be replicable. The two worked so well together that I’d dare say no new Riggs and Murtaugh could come close to re-creating the magic. You could say, “Maybe the new Lethal Weapon team would find their own unique magic.” I’d tell you to hush your filthy mouth, then slap you in the face with a hand bearing a white glove.

4. The Terminator
Life support has been breathed into this iconic franchise a few times, both extending the original run with Arnold (the only aging robot in the world) and then taking it to the future to see if John Connor could be the savior of mankind and the series. There was even a TV show. And recently there was talk of Justin Lin, director of the last three Fast & Furious installments, rebooting things with Schwarzenegger making good on his promise to be back. Then we learned a few things about the former Governator, and, well, this idea should be terminated by now.

5. Die Hard
Hollywood, I’m warning you — don’t. Just don’t. You’ve squeezed about all the juice you can from the John McClane fruit with four Die Hard movies. We, the action-going audience, are good with it because Die Hard never gets old. Sure, it’s dated — but it plays best that way. And always will. It’s a fine wine — albeit one filled with dynamite — that ages brilliantly. So when some hotshot crackerjack screenwriter comes along and tries to convince you that an up-to-date Die Hard with more-modern effects would be a blockbuster, please channel your inner John McClane as you tell him to “Take this under advisement, jerk weed” and show him the door. Or shove him out a window like Hans Gruber. Your call.

Nick Stevens tries to make funny about movies, pop culture, and sports as often as possible. He lists John McClane, Batman, and Tom Brady as the people with whom he’d most like to have beers. For more of his grown-up nonsense, visit his Tumblr page or follow him on Twitter.