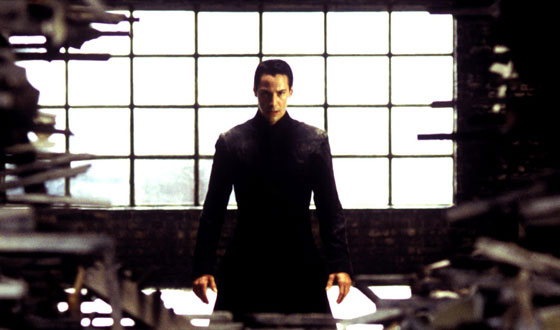 Is it possible for a monster hit to retain its cool? Yes, it is: The Matrix trilogy is proof positive. The series is crammed with timeless paranoia, astonishing visuals, highbrow ideas, and down-and-dirty action. Every night this week as part of Can’t Get Enough The Matrix, AMC will air at least one of The Matrix movies, starting with the original on Mon., May 16 at 8/7c. So without further ado, here are the top ten reasons we can’t get enough of The Matrix, Keanu Reeves, and bullet time.

10. Agent Smith (Hugo Weaving)
He’s well-dressed, he’s menacing, and there are more of him than we can count. You’ll be hard-pressed to find a villain more dastardly, yet less prone to stereotypical evil than Smith — the computer program (and later virus) leading the hunt for Neo (Keanu Reeves). Smith’s the scariest “man” to ever wear a tie clip.

9. The Chic Gear
Morpheus (Laurence Fishburn), Trinity (Carrie-Ann Moss), and Neo may be the front line of mankind’s war against the machines, but without the glittering shades, skin-tight leather pants, and sleek overcoats, would they be as mesmerizing? No way. They’re rebels, underground fighters, and dashing heroes — and they look the part.

8. The Merovingian
So elegant, so crude, so loathsomely French… the Merovingian (Lambert Wilson) is an ancient code running within the Matrix. He’s married to smokin’ hot Persephone (Monica Belucci) and loves making provocative pronouncements like, “Cursing in French is like wiping your ass with silk.” The Merovingian is the type of guy who steals your girlfriend while you’re watching. Irritating as hell? You bet. But the guy has style.

7. The Black Cat
Of all the explanations for déjà vu, nothing beats this one: It’s a glitch in the Matrix. That black cat Neo sees doing the same stretch-and-meow twice in a matter of moments? Just the Matrix hitting a cyber-pothole, recalibrating, and restarting a few seconds before the freeze. That’s way cooler than the official “anomaly of memory” stuff scientists will tell you.

6. The Sentinels
You know, those mechanical, multi-eyed, squid-like things (hence the nickname “squiddies”) that the Matrix uses to prowl the various subway tunnels, sewers, and other passageways under the old human cities. The sentinels look like something out of a horrifying nightmare. The way those metal-cable legs whip around is cool, and scary, and cyber-sexy, all at the same time.

5. The Blue and Red Pills
In a shout-out to Alice in Wonderland, Morpheus offers Neo two pills: “You take the blue pill, the story ends; you wake up in your bed and believe whatever you want to believe. You take the red pill, you stay in Wonderland and I show you how deep the rabbit hole goes.” In a movie chock-full of trippy, mind-blowing contradictions, this is the best.

4. The Falling Code
How hypnotic are those vertical lines of near-abstract letters, numbers, and symbols streaming endlessly towards the bottom of the screen? To this day, you can take a stroll around just about any office and odds are you’ll have to tear your eyes away from at least one streaming-code screensaver.

3. Carrie-Ann Moss
You know how great The Matrix’s gear is, and nobody looks better in it than Moss’s Trinity. She’s the heir to Aliens‘s Ripley and Terminator 2‘s Sarah Connor as the baddest female action hero of her day. But Trinity retains her womanhood: She loves (Neo, specifically), she feels, but you never forget the fact that she’s probably the toughest person in the room at any given point.

2. Keanu Reeves
No role could be tailored better to Reeves, who makes great use of that out-of sync-with-the-world quality. As the underground icon Neo, Reeves nails the mysterious and aloof thing; the art of seeming engrossed in his own world and amazed by the world around him. And then there’s what you’re thinking but don’t want to admit: Keanu Reeves is damn cool in The Matrix.

1. Bullet Time
Matrix mythology and bullet time are the perfect meeting of story and technology. In the world created by machines, laws of physics don’t apply. This allows for some truly mind-blowing special effects that don’t stretch the story beyond its believable limits. The speeding bullet slowed down and viewed by Morpheus; Neo, flying through the sky — every nuance and detail visible from all angles. There’s a reason The Matrix‘s special effects and style were imitated with such frequency: They were truly revolutionary.