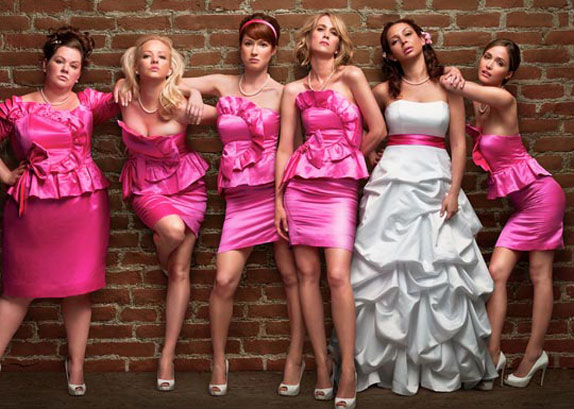 Admittedly, Bridesmaids sounds like a chick flick. It’s anything but. One look at the movie’s poster — which features Kristen Wiig, Maya Rudolph, and their badass but seriously funny co-stars — should convince you that romantic-comedy clichés have no business here. “We look like the Ramones. We look like the chicks that are about to take you out in an alley,” Bridesmaids member Wendi McLendon-Covey told me when she called FilmCritic.com to talk about Wiig’s unique sense of humor, the beauty of a well-timed F bomb, and the Wilson Phillips song that still makes her cry.

Q: I’ve heard multiple people categorize Bridesmaids by calling it the next Hangover. Have you heard that, and do you see the comparison?

A: You know, that’s interesting because this screenplay was written four and a half years ago, and it’s gone through many different incarnations. I think in an early draft, we did get to go to Vegas, and it was still pretty hilarious because it still went to some interesting places. But Annie Mumolo and Kristen Wiig, the co-writers on this film, have such different sensibilities that go off the beaten path. I guess the way that we are similar is that both films give people something that is hilariously funny and is not dumbed down and full of clichés. I understand why people are comparing the two. It’s an ensemble thing that takes place before a wedding, so it’s easy to make that comparison. But while they are two different movies, they both have very surprising elements to them, which is why The Hangover worked so well. You had no idea where that was going to go. Why would there be a tiger in your room?

Q: You guys played it for more relatable laughs.

A: I think we did. But that movie did really well, and we want to do really well, too, so we’ll take any comparison.

Q: The royal wedding seems like a perfect lead-in to a movie called Bridesmaids. Did you pay any attention to the hoopla of Prince William and Kate Middleton’s marriage?

A: We actually all were just watching it on the TV at lunch because
it’s everywhere and you can’t avoid it. Plus people are asking us about
it, so we figured we should look at it and try to figure out what’s
going on.

Q: How, exactly, did you guys approach being dirty with your
film’s comedy without being offensive? It’s a very difficult line to
balance.

A: But that’s how girls talk sometimes. It isn’t meant to be
shocking. Sometimes you just need a well-timed F bomb. Nothing else
works.

Q: Were there times, while you were improvising, when your own
internal radar went off and you thought maybe you were going to far?

A: Sometimes I thought, “Okay, I’m swearing too much. I know my
character is angry and bitter and a little wine soaked, but she doesn’t
need to be swearing this much.” Believe it or not, I did try and reign
it in a little. But nothing is really gratuitous. For instance, there’s
the bridal-shop scene, which is disgusting but funny. And it’s
funny because we’re not [getting sick] because we got drunk or we’re
just trying to be shocking. We’re doing it because the maid of honor
took us to a terrible restaurant because she is poor and can’t afford
anything else. And what’s the most humiliating thing? When you take
someone to dinner or you cook somebody dinner and they get food
poisoning. I mean, how bad do you feel? But we had to try and pretend
that everything is still okay for as long as we can. I’m like, “Okay, I’ve
got sweat dripping off of my face. But I’m fine. I’m doing just fine.
Just keep going.”

Q: Comedy can be difficult to gauge in the moment because you’re
never really sure how something will play with an audience until it’s
out there.

A: Isn’t that the truth? To us, it just felt funny while we were
doing it. All we could do was cross our fingers and hope everybody gets
it.

Q: But there’s something unique that you guys try, and it really
works. You extend a joke much longer than you are supposed to, so that, in time, the punch line becomes how long the joke is lasting and how far
you are able to go with it.

A: [Laughs] Right. This movie has a lot of cringe-worthy moments.
It’s almost like Curb Your Enthusiasm, where you are watching Larry
David and you are saying to yourself, “Oh, stop it. Stop doing that. Oh,
you’re not going to stop. Oh, please cut it out.” You know that point
where the audience starts to feel really embarrassed for the character?
Kristen is really good at pushing that, at going to that place and being
the butt of the joke. I think all of us ladies are, but I also think
[director] Paul [Feig] was good about reigning it in before it became
epic. Especially the engagement-toast scene. I mean, I cried my makeup
off watching the filming of that scene because it just gets so stupid. You want to shout, “Let it go! You are not going to win this one.” But I
just loved watching it happen.

Q: And of course, we get a Wilson Phillips cameo, which encouraged
some women in our preview audience to sing along to “Hold On.” What is
it about that song?

A: Oh, it’s nostalgia. That song defined my college years. It was
always on. And I didn’t really think of what the song meant back then.
But hearing it so many times during the filming of this movie, it was
like, “This is what this movie is about.” You got yourself into this own
mess. That’s a line from the song. We’re all responsible for our
choices, and she needed to pick herself up, dust herself off, and
hold on for one more day. But, yeah, you are never going to get that song
out of your mind. I will tell you, sir, that I had a little mini-crying-session in [the department store] the other day because they were
playing that song. I got very misty-eyed. I had to hide behind the scarves.