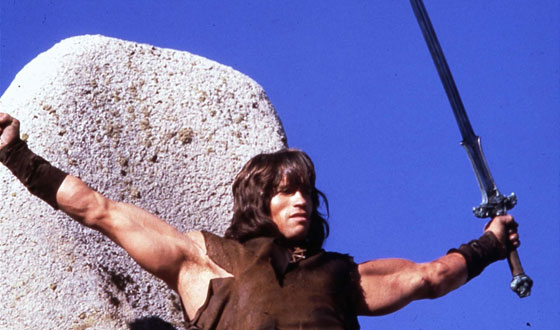 Conan the Barbarian is coming back! Actually, come to think of it, Conan’s already here with AMC’s Can’t Get Enough Conan which airs Conan the Barbarian and Conan the Destroyer back-to-back, twice in a row on Sat., May 21 starting at 5PM | 4C. In the meantime, here are five reasons why Conan might be Arnie’s defining role, even more than The Terminator.

1. World, Meet Arnold’s Muscles
While Pumping Iron introduced the world to Arnold’s manliness, Conan showcases his most utilized tool of greatness — his massive pectorals (and biceps, and every other muscle group). Considering that Schwarzenegger is shirtless for 90% of the movie, it’s safe to say that men aren’t the only fans of the film. Even decades later, Arnold is still pushing the anti-“girlie man,” muscle-head angle that started with Conan in his speeches on physical fitness.

2. World, Meet Arnold’s Accent
Arnold’s dialogue is delivered before he brought his accent under control and, as a result, is so great that Internet memes have sprung up around it. Conan’s philosophy about what is best in life (“Crush your enemies. See them driven before you. And hear the lamentations of the women!”) is something of a viral hit online. Google “Conan the Barbarian” and you’ll find fan tributes to Arnold’s quotable witticisms delivered in that thick Austrian accent. Jason Momoa, who’s taking over Arnold’s part in the upcoming remake, has one big loincloth to fill.

3. A Very Big Sword
You know you want that sword for your very own. And who wouldn’t? The weapon is nearly as massive as Arnold, and the beautifully designed hilt and crossguard mean its as good for smiting your enemies as for hanging on your wall. Arnold agrees: A while back, he revealed that he keeps the famous Conan broadsword in his office. Yes, a public official kept a giant sword in the place where he made important decisions for the largest state in the country. (That must have made for some interesting budget negotiations.) You can’t get more definitive proof that Arnold still has a fondness for his head-chopping days: He didn’t have Eraser props littering his office, now did he?

4. Conan Set the Tone for Every Arnold Role
Conan the Barbarian and Conan the Destroyer require Arnold to do two things — fight and spout epic tough-guy lines with such conviction that even the audience wants to run and hide. These are the things Arnold does better than anything else, and the things he does better than anyone else. No wonder the world took notice. Outside of his rare comedic work, every Arnold role that came after Conan follows that blueprint with extraordinary success. Without Conan, we wouldn’t have Commando, Predator, Total Recall or even Terminator.

5. Conan’s Romantic
The Terminator — good or evil — wouldn’t know romantic love if it hit him in his metallic skull. That’s not his fault — he’s a cyborg after all. But Conan, unlike most action movie characters, is a romantic guy. Conan is about killing, but the love Arnold shares with the sexy Valeria (Sandahl Bergman) is actually sweet, if ultimately tragic. After all, just like him, she’s a bad-ass outlaw, looks like a Greek Goddess and wears a revealing outfit. Some things are just meant to be. And when she lays dying in Arnold’s arms, that’s when you know Conan, despite being Arnold’s first major movie, is his most well-rounded.

Check out AMC’s Crazy About Conan the Barbarian starting at 5PM | 4C on Sat., May 21. Click here for a full schedule.