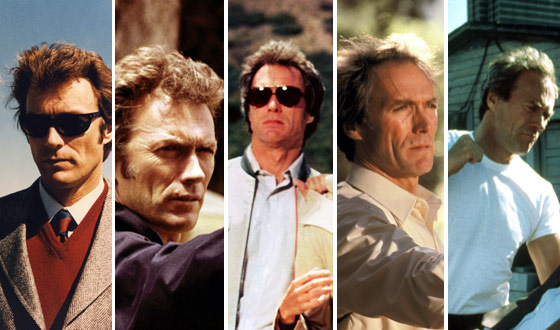 There’s more to the Dirty Harry movies than great catchphrases — though those catchphrases are truly great — since Harry Callahan (Clint Eastwood) is a contradictory hero for a complicated time. He believes in the rules but never hesitates to break them. He’s tough on crime but doesn’t mind killing perps. So without further adieu, let’s have a look at ten reasons we can’t get enough Dirty Harry.

10. Clint Eastwood, Stuntman
He did them himself. Not all of them — a man’s got to know his limitations. So Eastwood left things like jumping off ten-story buildings to the pros. But keep a close eye on the scene in which Harry leaps from a bridge onto the roof of a moving school bus: Eastwood’s face is clearly visible. Now that’s an action-movie star.

9. Tyne Daly, Female Sidekick
Harry’s partners die with depressing regularity. The best of the bunch? The Enforcer‘s Kate Moore (Tyne Daly), who is, yes, a woman. Harry is not pleased about this initially, but her quest to win his begrudging respect makes for the best chemistry Eastwood has with an ally throughout the series. Of course, she dies at the end.

8. Harry’s Misanthropy
The Dirty Harry series took flak for celebrating a racist, sexist reactionary who considers niceties like Miranda warnings wussy nonsense. But Harry doesn’t play favorites. His co-worker explains that he “hates everybody: Limeys, Micks, Hebes, fat dagos, niggers, honkies, chinks — you name it.” So Harry isn’t a racist as much as he’s a good old-fashioned misanthrope.

7. The Funkadelic Score
The main theme is a cheesy blast of jazz-tinged hipness, both timeless and totally of the seventies. The drums are hot, the bass line is cool, and the pacing tells you all you need to know about Harry. The music starts off edgy but controlled and gets more intense and angry by the minute.

6. Seventies San Francisco
Almost all of the series is shot on location. This is what the seventies really looked like, not the macramé vests and bell-bottom jeans you see on TV. The real seventies is Harry running around dangerous streets in brown polyester pants, a dorky V-neck sweater, and the lamest sport coat ever.

5. Director Don Siegel
Eastwood signed up for Dirty Harry on two conditions, one of which was hiring Siegel, who’d already directed him in Coogan’s Bluff. Siegel gave the first movie the grit, nerve, and casual ambiguity that carry the entire series to such edgy heights. Eastwood took notes: Siegel is the “Don” of the “Don and Sergio” to whom he dedicated Unforgiven.

4. The .44 Magnum
Smith & Wesson’s revolver had been around since 1955, but Dirty Harry made it the quintessential big toy for big boys. So how big was it? Hard to say — the barrel came in several lengths, and gun buffs are still debating the matter. But Harry’s lethal weapon is a star itself. No wonder psycho killer Scorpio (Andrew Robinson) takes one look and says, “My, that’s a big one.”

3. Scorpio
Inspired by the real-life Zodiac Killer who terrorized the Bay Area in the late sixties and was never caught, the sociopath Scorpio is one convincing character. By the time he hijacks a bus full of grammar-school kids, you know that he’s 100 percent conscience free and that he’d just as soon kill them all as terrorize them into singing another round of “Row, Row, Row Your Boat.”

2. “Go ahead — Make my day”
Contrary to common belief, it was not until 1983’s Sudden Impact, the fourth of the five movies in the franchise, that Eastwood uttered this most famous line. But that doesn’t dilute its effect. To this day, “Go ahead — make my day” is action-pic shorthand for, “I’m a badass, but, please, feel free to try to fight me.”

1. Clint Eastwood
He was born to play Harry Callahan. Who else could successfully transfer the amoralism of Westerns like A Fistful of Dollars to seventies urban America? Who else could deliver lines like “Do you feel lucky, punk?” in that gruff voice without coming off the least bit cheesy? And who else could cause every bad guy around to wet themselves the moment he arrives? Only Clint Eastwood.