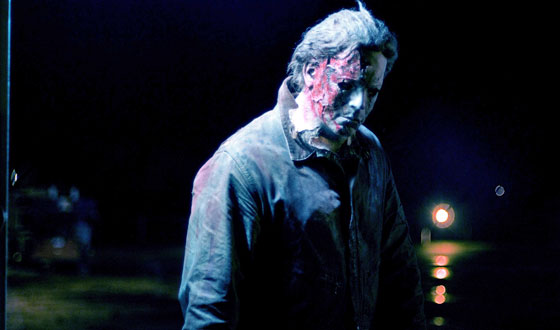 Ask a horror fan to name some pet peeves, and it’s a safe bet that remakes are somewhere near the top of the list, especially remakes of good movies no further away than a click on your Netflix queue. Sequels to remakes, on the other hand, rarely make the grade. Lots of people have opinions (mostly blistering) about Halloween III: Season of the Witch, but who even remembers that there was a follow up to David Cronenberg’s stunningly disturbing eighties remake of The Fly, let alone whether or not it was a remake of the 1959 sequel Return of the Fly? Well, I do, and I even have some thoughts about how the original sequels and the remake sequels stack up, starting with the most recent and, as it happens, best of the sequels of the remakes. So now it was totally worth ponying up $7.50 to see Halloween: The Curse of Michael Myers.

The Sequel to the Remake – Halloween II (2009)
You probably know all about the original Halloween, John Carptener’s groundbreaking horror smash. Fair enough. Rob Zombie added a substantial prologue to his remake, giving Michael Myers a history of abuse and neglect that’s not present in Carpenter’s version. But he otherwise sticks close to the stalk-and-slash playbook, even embroidering on enigmatic details like the Rabbit in Red matchbook Dr. Loomis picks up at a lonely highway phone booth. Halloween II (1981), aside from several flashy murders, including a hypodermic needle to the eye, is remembered primarily for the big reveal: Michael Myers is Laurie Strode’s older brother. But in Zombie’s remake most of the action hinges on the mental state of Laurie (Scout Taylor-Compton): is she suffering posttraumatic shock or tainted with the same hereditary madness as her brother?

Verdict
Zombie’s sequel by a hair. Though time has softened the virulent loathing with which the 1981 sequel was greeted, the movie remains repetitive and uninspired. Horror fans who hated Zombie’s remake didn’t like his sequel either, but it is the more ambitious movie.

The Sequel to the Remake – The Hills Have Eyes II (2007)
Wes Craven’s original Hills Have Eyes epitomizes the best of seventies horror: gritty, personal, and paced like a freight train. Alexandre Aja’s excellent 2006 remake ratchets up the gore and adds background but basically sticks to the source. The sequel to the remake unfolds only two years after the events of the first movie and pits a cadre of well-armed but inexperienced National Guard trainees against the surviving desert cannibals. All of whom, by the way, are men; this time, the basic instinct driving them isn’t hunger. Not for food, anyway. Music-video veteran Martin Weisz’s feature-directing debut is neither as gory nor as well paced as Aja’s remake, but the story is compelling, and the desert landscape looks more godforsaken than ever.

Verdict
No question about it: the sequel to the remake is much better than the sequel to the original, The Hills Have Eyes Part II, which was, by all appearances, unfinished. The 2007 sequel is a genuine expansion on the first movie, rather than a halfhearted attempt to cash in on its predecessor’s success.

The Sequel to the Remake – The Texas Chainsaw Massacre: The Beginning (2006)
Tobe Hooper’s Texas Chain Saw Massacre scandalized critics and old-school horror buffs, who preferred suggestion to full-frontal shocks. But for all the hand-wringing, Leatherface entered directly into the American pop-culture consciousness, a bogeyman for the Vietnam era. Its sequel, The Texas Chainsaw Massacre 2, features Dennis Hopper and then-state-of-the-art gore but landed with a resounding thud. Marcus Nispel’s 2003 remake fared better, and the mud-colored sequel to Nispel’s remake is actually a prequel that explores the unfortunate childhood of a disturbed and disfigured orphan doomed to become a modern horror-movie icon. Four young people cross his path and wish they hadn’t, thus truly launching the saga. Unfortunately, the audience knows exactly what is going to happen, and the inevitable takes forever to unfold.

Verdict
The Texas Chainsaw Massacre: The Beginning by a hair. Hooper’s sequel to his groundbreaking original was a debacle, setting the bar so low that the sequel (sorry, prequel) to the remake comes up the winner by virtue of being merely dull, not horrific.

The Sequel to the Remake – The Ring Two (2005)
Ringu (1998) reworks the traditional Japanese ghost story for the video age, with a mysterious tape: anyone who watches it dies, unless he or she makes a copy and persuades someone else to watch. Eek! It was remade for U.S. audiences in 2002, as The Ring. Both versions spawned sequels, though only the original generated more than one. The Ring‘s sequel was written by horror hack Ehren Kruger. The flick picks up months after the first movie: Rachel (Naomi Watts) moves with her son, hoping to escape the influence of the black-haired ghost girl whom they saw on a haunted videotape. Spoiler alert: they don’t!

Verdict
Tie. Ring 2 — the sequel to the original — is very confusing but features the creepy atmosphere of Ringu, which introduced a generation of U.S. horror buffs to the subtle chills of Japanese ghost stories. The Ring Two makes perfect sense but manages to be even duller and more reductive than The Ring.

The Sequel to the Remake – The Fly II (1989)
The Fly (1958) is an unabashed B-movie with an unforgettable denouement. The sequel, Return of the Fly, has a plot that is memorably silly, even by B-movie standards, and includes the once-in-a-lifetime chance to see a man with guinea-pig feet and a guinea pig with human hands. David Cronenberg’s 1986 body-horror remake hauled all the original’s unexploited subtexts right up to the surface, from deep-rooted fears of aging and deformity to the discomfiting acknowledgment that freakishness is alluring. So that was a win! And the sequel to that remake, The Fly II, written by Frank Darabont, is downbeat but glorious. The story now centers around the original scientist’s son (Eric Stoltz), raised in a lab by the exploitative moneyman who backed his father’s research.

Verdict
Another tie. For all its silliness, the original sequel, Return of the Fly, is the more successful movie on its own modest terms. But The Fly II is ambitious, cynical, and features a strong performance by Stoltz. At the tail end of the eighties, it dared to suggest that what we shouldn’t fear cutting-edge science but the power of corporate greed to pervert it.