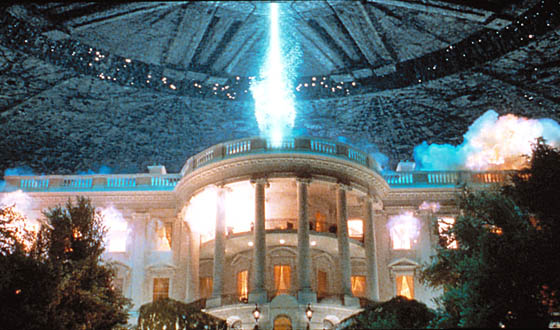 This weekend sees the release of Battle: Los Angeles, in which the aliens come with invasion on their minds — you know, like they do. And we know they do because science-fiction-film history is packed with all sorts of films where the aliens come and, by force or stealth, try to take over the world. How will the aliens in Battle stack up to their predecessors? I’ve compiled this space-invader cheat sheet to help you compare and contrast.

Battlefield Earth: A Saga of the Year 3000
We can all agree that this is a terrible, terrible movie, but you know what? The aliens did invade and kick the humans’ butts, and when the movie opens up our descendants are reduced to scrambling around radioactive hills and pounding rocks together to survive. That’s a successful invasion. Sure, the humans get revenge, but that’s not about the invasion: that’s just bad corporate management, and that’s an entirely different thing. Invasion score: A

The Faculty
Cross the universe to take over a high school? And fail? Talk about underachieving. Invasion score: F

Independence Day
See, now, these guys have a plan. Step one: find a planet. Step two: zap the native dominant species with giant lasers.
Step three: profit. And they go through their invasion checklist with style, making sure to obliterate landmarks and to make humans nuke their
own cities in a futile attempt to fight back, which is a nice touch. And
then they fall down by letting an old fighter piloted by humans slip
through their defenses and upload a killer computer virus. This would be
like a modern aircraft carrier letting a P-51 Mustang land and no one
thinking twice about it. Dumb. But until then, nicely done
invasion. Invasion score: B-

Invasion
of the Body Snatchers
In the 1956 version, the people in
the movie manage to warn the rest of us about the aliens who replace
us, but by the time the 1978 version rolls around the aliens manage to
take over the whole planet with hardly a peep. Hey, it was the seventies. It
was a crazy time for everyone: we can’t be blamed if we didn’t bother
to let anyone know humanity was being traded in for pod people. They’re
nice quiet neighbors anyway. Invasion score: A

Mars
Attacks!
It’s hard to give full credit to an alien
invasion ultimately thwarted by Slim Whitman — although, well done, Slim
Whitman — but I will say this: right up until the moment Whitman gets
the best of them, these alien invaders have an amazing amount of fun
zapping Congress, destroying landmarks, and performing unspeakable
medical experiments on humans. It’s inspiring, in its way, to see the
aliens take such joy in their work, even if their work is wiping us out.
So I’ll give them extra credit for effort. Invasion score: C+

The
Puppet Masters
Take the comment up there about The Faculty,
replace “high school” with “Des Moines,” and proceed. Invasion
score: F

Signs
Really, aliens? You invade a planet that is made up of stuff that can melt flesh off your bones? You deserve to be defeated by Joaquin Phoenix and a baseball bat. Stupidest invasion ever. Invasion score: F

They Live
The aliens come to enjoy a fabulous conspicuous-consumption lifestyle and also to slowly turn the Earth into a version of their own world through the magic of global warming. Stupid of them to leave alien-revealing
sunglasses around, of course, but the fact is that by the time “Rowdy” Roddy
Piper gets his hands on a pair, the invasion is already a done deal. You
go, yuppie aliens. Invasion score: B+

Transformers
These technically are invasion films, since the robots are from space, and the Decepticons, at least, are happy to kick the crap out of the humans (as loudly as possible) to get what they want, which usually happens to be here on earth. But that’s just the thing: while the Decepticons are happy to kill humans and use their machines to
build an army — because why not, right? — the Earth is ultimately beside the point for them and their plans for universal domination. And they get beaten by the Autobots anyway, twice even. Invasion score: D

War
of the Worlds
Why do they invade? Essentially, because
they don’t like us. Which is fine, I suppose, but one thinks that if that were truly the case it would just be easier to nuke us from orbit. (It’s the only way to be sure.) A species that is smart enough to fly from Mars or wherever to waste us lousy humans probably should know about microbes. Tell me I’m wrong about this one. I don’t think I am. Invasion score: C