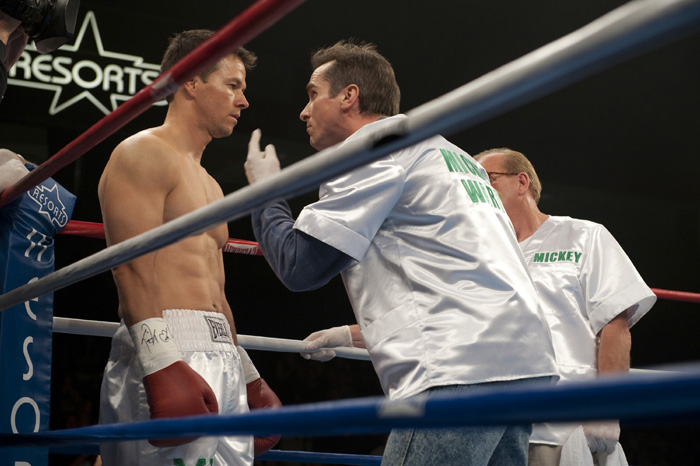 Oscar-nominated stories about fighting for a better life: in David O. Russell’s emotive drama The Fighter, an almost-over-the-hill boxer gets another chance, while in Lucy Walker’s documentary Waste Land a Brazilian artist makes sublime sculptures out of garbage. These and other films both noteworthy (Hereafter) and not (The Switch) are coming this week to Blu-ray and DVD.

Mark Wahlberg fought for years to bring the true story of boxer Micky Ward and his drug-addicted brother, Dicky, to the screen. Although the resulting film won Christian Bale and Melissa Leo Oscars (for playing Dickey and the brothers’ mother, respectively), our critic thought it all a little too formulaic, saying that viewers could start watching the film at any point and, “after five minutes, deduce what’s already happened and what’s about to happen next.”

Lucy Walker’s Oscar-nominated documentary might have an unusual setting — the world’s largest garbage dump, outside Rio de Janeiro — but its depiction of the lives of the catadores (workers who make a living picking out recyclable garbage) has a universal sense of humanity and beauty. Our critic found the film’s treatment of the catadores and how their lives are changed when artist Vik Muniz collaborates with them on making gigantic sculptural art out of their garbage “luminous” and a “dazzling thing to behold.”

Clint
Eastwood’s contemplative drama follows three separate story lines that
are initially related only by their shared view of death — a woman’s
life is changed after she barely survives a tsunami and thinks she’s seen
the afterlife, a reclusive medium (Matt Damon) is tempted to return to
his old fortune-telling ways, and a young boy tries desperately to
contact his dead brother. Our critic thought the film’s attempts
to deal with mortality “not wholly successful” but held that “dismissing
the sincerity and personal weight of Eastwood’s film and the director’s
formidable filmmaking abilities would be deeply cynical.”

No One Knows About Persian Cats

In Bahman Ghobadi’s bittersweet musical drama, a musical duo spends the entire film dashing around Tehran trying to gather the equipment, musicians, audience members, and permissions to play a gig. The film’s mostly comic but occasionally tragic view of artists struggling under crushing
authoritarianism impressed our critic, who termed it a “wild ride: a
bristling document of artists who, to paraphrase a prominent lyric, can
only dream in their reality.”

The Garden of Eden

In this
adaptation of Ernest Hemingway’s posthumously published novel, a WWI-veteran turned novelist and his beautiful heiress wife spend 1927
tooling around beauty spots in Spain and Italy, spending her money and
generally enjoying themselves. Complications arise for the husband when
his wife’s increasingly adventurous and boundary-crossing sexuality
starts to confound him. Our critic found the story a “little light” but
generally appreciated this “sexy psychological thriller.”

Jennifer Aniston and Jason Bateman play good friends who, for some reason, have
never fallen in love. Then she decides to get pregnant via artificial
insemination and, several high jinks and mistakes later, does so, only it’s
(surprise) with her best buddy’s seed. Our critic put forth the
following proposal: “Let’s all agree that comedies based around sperm banks or sperm donations should be banned from our fair shores forever.”