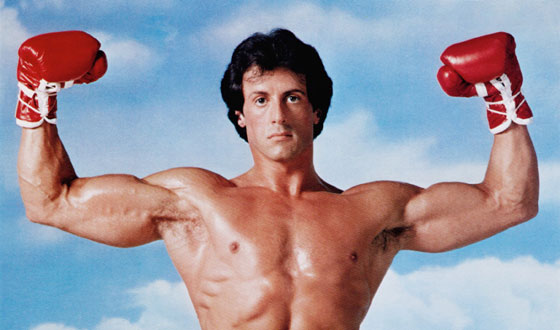 Remember the days of Sly Stallone, sex symbol? After Rocky, women thought he was the most watchable man in the world. Heck, Man Watchers, Inc., voted him the Most Watchable Man in the World. Why? Because of his “fantastic body, rhythmic movements, and animal magnetism.” Indeed. “Add sensitivity and gentleness,” they explained, “and you have a dynamic combination.” I couldn’t agree more. Rocky didn’t just make Stallone a star; it made him a heavyweight hunk. When it comes to being sexy, Rocky is the only one of Stallone’s characters who has all the right moves, right down to his nickname: the Italian Stallion. No woman fantasizes about a boyfriend named Cobra. In honor of Stallone’s six-pack abs, here are six reasons Rocky is the character who excites women the most.

1. He’s Just Tough Enough
Yes, muscle is sexy. That is, until you’ve reached the point where you’re running through the jungle with veins the size of pythons popping out of your arms. Then not so much. As Rambo, Stallone has too much testosterone. In the musical Rhinestone, when Dolly Parton turns him into a spoon-playing country singer, he doesn’t have enough. But Rocky is just right: tough enough to work as a loan shark’s leg breaker but soft enough to get the job done without breaking any legs. Dreamy.

2. He’s Got a Great Sense of Humor
Don’t get me wrong: Stallone has funny moments in Tango & Cash and Demolition Man. But joking about your buddy’s shortcomings by calling him “Peewee” or making bad puns about being cryogenically frozen isn’t exactly going to make a girl’s heart skip a beat. Rocky’s humor, on the other hand, is meant for shy Adrian. Sure, some of his jokes don’t land as well as his punches do, but he keeps trying to make her laugh, and when she does the rest of us do, too. He really is quite charming.

4. He’s Got Great Taste in Music
When Rocky plays “You Take My Heart Away” after finally persuading Adrian to come inside with him, you know he’s got game. Before the song is over, she’s wrapped in his arms. Now think of Stallone’s love scene in Demolition Man. The theme from The Love Boat is playing, and he and Sandra Bullock have sex without touching. No, wait — don’t think of that.

5. He’s Great With Kids
Rocky doesn’t just watch over his turtles, Cuff and Link; he also looks out for a young girl in the neighborhood, and that’s a turn-on. To be fair, Rocky isn’t the only Stallone character with paternal instincts. Who can forget how he wins back his son by arm wrestling in Over the Top? And the soldiers and cops he plays always save those in need. But they’re heroes; they have to help. Rocky is a bum, and he still gives a damn — and all he gets for his trouble is a “Screw you.” In the battle for our affections, Rocky wins another round.

6. He Can Go the Distance
He doesn’t win his match with Apollo, but his ability to keep going when times get tough — that makes him marriage material. In good times and bad — when Adrian’s in a coma or his mentor dies or his protégé disowns him or his son resents him — he’ll persevere and he’ll be there. His love is never wavering, no matter the sequel. Who can compete with that?