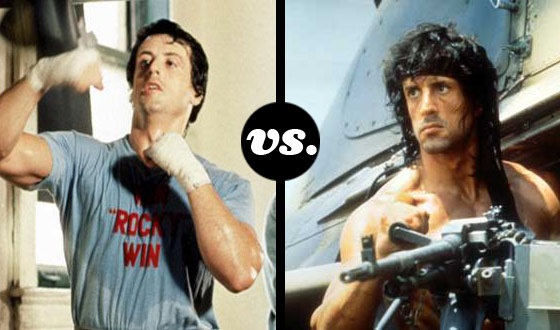 Tired of the cold? Who isn’t? You’ve just go to fight through it like Sylvester Stallone would. After all, Sly’s many characters are nothing if not fighters. Take Rocky Balboa, who fights for a living but also fights through the kind of adversity that makes most men weak in the knees and sometimes — as during his training in Rocky IV — through a frozen tundra that makes this winter’s snow look like a few flurries. No enemy brings Rocky down. But what happens when he battles another Stallone, like Rambo? Would Rocky’s fists win against the resourceful Vietnam vet? How would either of those legends fare against John Spartan of Demolition Man or Ray Tango — two cops with serious attitudes and serious moves — or four other Stallone tough guys? Who has the strength, stamina, and raw power to outlast seven other Stallones in a no-holds-barred smackdown?