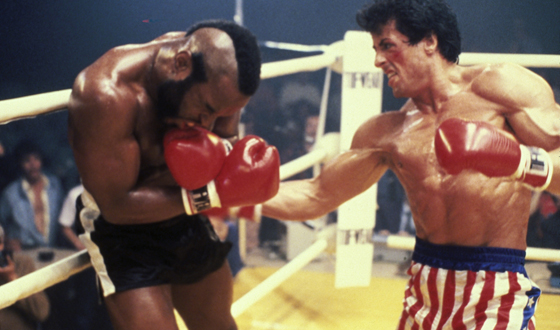 It may seem strange that boxing movies remain popular to this day. After all, ever since Mike Tyson helped himself to some ear carpaccio against Evander Holyfield, the sweet science has been on a steady decline. Gone are the days when big-time prize fights featured Muhammad Ali, Joe Frazier, Jack Johnson, and Jack Dempsey and were like the Super Bowl, only more exciting. Yet boxing movies haven’t suffered the same fate, and currently the genre is as strong as ever, with The Fighter, nominated for seven Oscars, ready to join the boxing-movie pantheon alongside classics like Rocky, Raging Bull, and Million Dollar Baby. So if people no longer want to pay to watch people punch each other, why do we continue to love movies about people who punch each other? These are the kinds of things I like to think about, and I think I came up with five good explanations.

1. Training Montages
Everybody loves a good training montage. If they don’t, they should. The standard for training montages, boxing or otherwise, are contained in the Rocky movies. Try watching Rocky get in shape for his first fight with Apollo Creed on the mean streets of Philly or prepare for Ivan Drago by running up a frozen Russian mountainside and lifting horse carriages, and tell me you’re not ready to run through a brick wall. Hey, if he can get ready for the fight of his life in a dynamic 90 seconds, then maybe you can be slightly less disappointing, too. They’re well-edited excitements served with a side of musical inspiration.

2. Everybody Loves an Underdog
Rocky Balboa, Jim Braddock (Cinderella Man), Micky (The Fighter): none of those guys is given a chance in hell, yet they all make themselves great. Guys like that give us hope, make us think that maybe we can do something great one day. And, honestly, what could be simpler than making something of yourself by punching people? The genius is in the simplicity. Besides, nobody likes going to the movies to see stories about people who are supposed to be great and then are. Nobody wants to watch some guy overcome nothing. Boring!

3. Men Like to Fight
If you’ve never opened your eyes, watched the news, or been to a bar, you might not know that men like to fight or, at least, to watch other people fight when they’re too chicken to do so. I’m not a violent person myself, but I can’t lie or deny: sometimes I just want to hit something. Well, what could be better than watching Sylvester Stallone or Robert De Niro (Raging Bull) or Denzel Washington (The Hurricane) or some other manly man do it for you? Watching a boxing movie gives you all the enjoyments of fighting without the risky downside of getting beaten up or somebody actually losing an ear or something. And since movie pugilists like Rocky’s opponents tend to be metaphors for life trying to keep us down, it works on two levels. Pow! See how that works?

4. Comebacks and Redemption
Sounds like the name of a seventies band, but sport movies — and boxing films in particular — offer tales of great comebacks and dramatic human redemption. Boxing, as presented to us by Hollywood, shows that even if you’re down-and-out, a bum, or a man with little hope all you have to do is punch your way out of the dumps. Yes, violence is always the answer. In The Fighter, Dicky (Christian Bale), a once-great fighter himself, seeks personal and familial redemption by training his brother, Micky (Mark Wahlberg), to be as great as Dicky could have been. Rocky’s doing nothing with his life until Mickey and Adrian get him to go from pretender to contender. People, you can’t make this stuff up. Well, you can, but it’s still pretty gripping.

5. A Good Cry
Try and tell me that you didn’t have one of the ten best cries of your life while watching a boxing movie. Maybe they were tears of joy, when Rocky calls out for Adrian. Maybe the heartbreaking father-daughter tale of Million Dollar Baby got to you. Or maybe by the time Rick Schroder begged Jon Voight’s Champ to wake up, you found yourself a blubbering mess. Dudes are allowed to have a good cry during a sport movie, and boxing movies really help us clear out the old tear ducts. We try to blame it on the theater being dusty. Don’t fight it. Let it out. Real men are okay with crying over other muscular, sweaty men.

These basic dramatic staples of storytelling will always be at the core of boxing, which might be why boxing lends itself easily to the silver screen. And while the sport itself seeks a new champion to inspire fans to return to the ring, boxing movies offer an endless buffet of real-life tales. So long as people like Sylvester Stallone write lines like “You’re gonna eat lightning and crap thunder,” then boxing movies will always have a puncher’s chance. Oh, and the judges just awarded me a point for avoiding the word “knockout” in this column. Thank you.

Nick Stevens, co-host of AMC’s Action Pack (Wednesdays, at 8PM | 7C), tries to make funny about movies, pop culture, and sports as often as possible. He lists John McClane, Batman, and Tom Brady as the people with whom he’d most like to have beers. For more of his grown-up nonsense, visit his Tumblr page or follow him on Twitter.